20 Skylines Of The World: Then Vs Now. The speed and magnitude of a change in the skyline is representative of how rapid a city has changed through a a century or more. 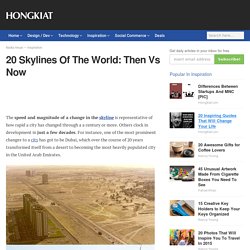 Others clock in development in just a few decades. For instance, one of the most prominent changes to a city has got to be Dubai, which over the course of 20 years transformed itself from a desert to becoming the most heavily populated city in the United Arab Emirates. (Image Source: bongorama & mediavida) In this post, we will look at the rapid growth, by way of skylines, of 20 cities from around the world to give you an idea of how the world has, is and will change through time. You might also be interested in the amazing skyscraper compilation we have, as well as a list of stunning futuristic skyscraper concepts we have. Recommended Reading: 100 Imaginative “Cities of the Future” Artworks New York City, USA. 1870 vs today. Shanghai, China. 1990 vs 2010. Long Beach California, USA. 1953 vs 2009. Eiffel Tower, Paris. 1900s vs today. Doha, Qatar. 1977 vs 2010s. Moscow then and now – interactive with photographs from the Guardian archive. To get a truer sense of how Moscow has developed since the 1970s, we looked back through the Guardian’s photographic archives – now housed in the GNM Archive – then commissioned photographer Maria Ionova-Gribina from Salt Images to take a series of pictures from the same viewpoints. 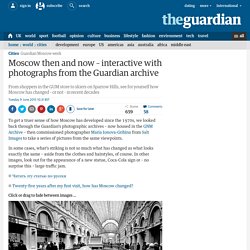 In some cases, what’s striking is not so much what has changed as what looks exactly the same – aside from the clothes and hairstyles, of course. In other images, look out for the appearance of a new statue, Coca-Cola sign or – no surprise this – large traffic jam. Читать эту статью по-русскиTwenty-five years after my first visit, how has Moscow changed? Mind Blowing Photos of Iconic Cities Then and Now!

Mind Blowing Photos of Iconic Cities Then and Now!

Share Mind Blowing Photos of Iconic Cities Then and Now! For Different Solutions by alexandra.mcalpine Trending There is no doubt time changes a lot of things, but to be able to actually see how much things can change with proof from a photograph is mind blowing! Check out how much these iconic cities have changed over time with these then and now photographs! Paris THEN Finished in 1836, L’Arc de Triomphe in Paris has stood at the western tip of les Champs Elysees for nearly 200 years. Paris NOW Today, the arch is still standing except it is now a major traffic route!

New York THEN This is New York City’s Times Square in 1943. New York NOW Today’s Times Square is best known for its bright, flashing lights and tourists galore! Toronto THEN Toronto became known in the late 1800s for its whiskey production but grew quickly in the 1900s with new immigrant groups pre and post-war. Toronto NOW Chicago THEN Taken from Chicago’s “Museum Campus” 1941. Nottingham Then and Now Part 3: How some buildings have changed over the Years.

Areas of Nottingham City Centre – and how they have changed! 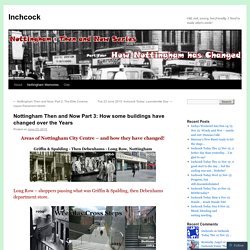 Long Row – shoppers passing what was Griffin & Spalding, then Debenhams department store. A flight of steps leading up from Weekday Cross. Under these steps, or their predecessors, was at one time kept a stock of whale-oil, which was used for the illumination of the town, which must have rendered the neighbourhood somewhat unsavoury. It is recorded that upon one occasion a frost occurred of such intensity as to freeze this stock of whale-oil. Weekday Cross itself stood in the north-west corner of the area, in front of the more modern entrance to the hall.

People wept openly in Long Row when the wrecking ball started smashing away one of Nottingham’s favourite old buildings. These were the final, desperate moments for the Black Boy Hotel, the eccentric Watson Fothergill-designed Victorian edifice which, over the years, had welcomed stars of show business and sport through its doors.

Well Inchcock agrees with him 100%! Like this: A lost city: Photos of Bucharest's past. Andrei Pandele was a young architect when he began photographing his home country, Romania, in the 1970s. 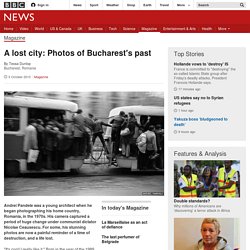 His camera captured a period of huge change under communist dictator Nicolae Ceausescu. For some, his stunning photos are now a painful reminder of a time of destruction, and a life lost. "It's cool! I really like it. " Born in the year of the 1989 Revolution, Paul is one of a new generation of Romanians - multilingual, well-educated and ambitious for his country. He is understandably proud of the giant House of the People, once Ceausescu's palace. We are hovering in one of its many airless, pointlessly large halls, waiting for a conference on sustainable tourism to finish in the never-ending room next door. I don't share Paul's sentiments. Photographer Andrei Pandele is emphatic: "The Palace? We have met in a tea shop in the old Jewish quarter of Bucharest. They're exceptional images rarely caught on camera, but then Andrei is an exceptional man - tall, dignified and handsome at 65.