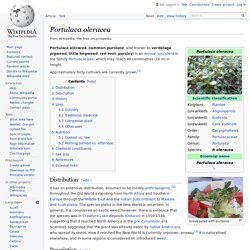 Approximately forty cultivars are currently grown.[1] Distribution[edit] It has an extensive distribution, assumed to be mostly anthropogenic,[2] throughout the Old World extending from North Africa and Southern Europe through the Middle East and the Indian Subcontinent to Malesia and Australasia. Purslane nutrition facts and health benefits. Custom Search Soft, succulent purslane leaves have more omega-3 fatty acids than in some of the fish oils. 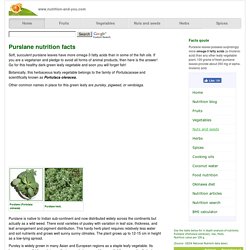 If you are a vegetarian and pledge to avoid all forms of animal products, then here is the answer! Go for this healthy dark-green leafy vegetable and soon you will forget fish! Why growing watercress in your garden is the big, new health trend. Watercress is used by many to make a lovely, fresh garnish or as an accompaniment in a sandwich, but there's a lot more to it than that, including a number of health benefits. 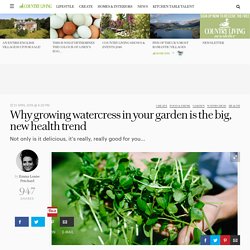 That's why it's the latest trend in outdoor kitchen produce. Is it time you gave it some love? The health benefits of watercress Not only is watercress packed with peppery flavour, it's also incredibly healthy. It contains gram for gram more vitamin C than oranges, more calcium than whole milk and more folate than bananas. Advertisement - Continue Reading Below On the Whole Foods ANDI scale - which ranks foods on their nutrient content from 0 to 1000 - watercress scores a perfect score of 1000 making it an original superfood. ​ Watercress' peppery taste is due to natural glucosinolates. DIY Strawberry Pallet Planter. Do you have so many strawberry plants but don’t actually have an idea how to use them to improve your garden design? 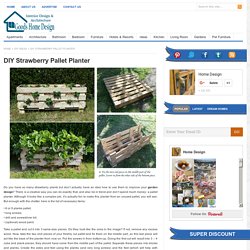 There is a creative way you can do exactly that, and also be in trend and don’t spend much money: a pallet planter. Although it looks like a complex job, it’s actually fun to make this planter from an unused pallet, you will see. But enough with the chatter, here is the list of necessary items: • 6 or 9 planks pallet; • long screws; • drill and screwdriver bit; • (optional) wood paint; Just Food. Hidden Harvest. What every home vegetable gardener needs to know about GMO seeds, hybrid and F1 hybrid plants. Home gardeners can have great success without delving too deeply into the genetics of horticulture. 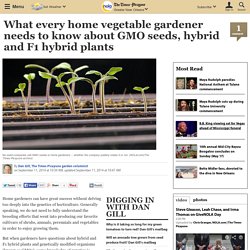 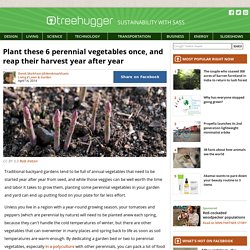 Unless you live in a region with a year-round growing season, your tomatoes and peppers (which are perennial by nature) will need to be planted anew each spring, because they can't handle the cold temperatures of winter, but there are other vegetables that can overwinter in many places and spring back to life as soon as soil temperatures are warm enough. By dedicating a garden bed or two to perennial vegetables, especially in a polyculture with other perennials, you can pack a lot of food production into a small area. 6 Perennial vegetables that keep on giving, year after year: 1. 2. 3. 4. 5.

Please eat the dandelions: 9 edible garden weeds. All too often, homeowners and gardeners wage war in their lawns and gardens against the plants that grow incredibly well there, but that aren't intentionally planted, and many times, the justification for these battles all comes down to the words we use to describe them. 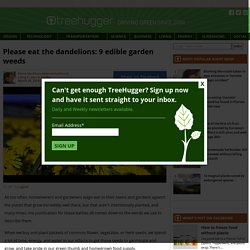 When we buy and plant packets of common flower, vegetable, or herb seeds, we spend a lot of time, energy, and water in our efforts to get those seeds to germinate and grow, and take pride in our green thumb and homegrown food supply. But when a plant that we identify as being a weed is found growing in our lawn or garden, out comes the trowel and hoe (or for the ruthless and impatient gardeners, weedkillers such as RoundUp), and we may spend the entire growing season keeping these opportunistic and resilient plants at bay, in order to have neat and tidy garden beds and uniform lawns. 1.

Dandelion 2. ZooFari/CC BY 3.0 3. Cliff/CC BY 3.0 4. Wendell Smith/CC BY 3.0. Montreal launches organic farming initiative to feed city’s poor - Montreal. MONTREAL — It looks like an abandoned park, with scraps of machinery and green hills as far as the eye can see. 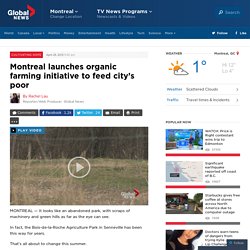 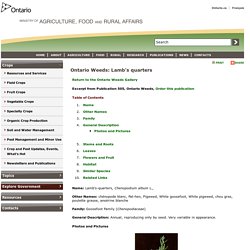 Photos and Pictures Lamb's quarters. Kanata couple angered by city order to change veggie garden - Ottawa. An Ottawa couple who maintain a small vegetable and herb garden next to the sidewalk in front of their home say they're saddened and frustrated after a bylaw officer gave them until July 30 to remove the wooden structures around it. 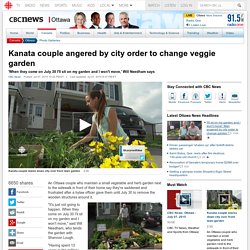 Portulaca oleracea Green Purslane, Little hogweed PFAF Plant Database. Edible Parts: Leaves; Seed.Edible Uses: Salt. Leaves and stems - raw or cooked[1, 4, 12, 27, 37]. The young leaves are a very acceptable addition to salads, their mucilaginous quality also making them a good substitute for okra as a thickener in soups[4, 183]. Older leaves are used as a potherb[4]. How to Not Drive Your Farmer Crazy at the Farmers’ Market. It’s farmers’ market season—that much-anticipated time of year when farmers emerge behind displays of flowers and heirloom vegetables, and customers flock to the market clutching their most colorful African baskets. As a former vegetable farmer, I have spent thousands of hours hawking produce at the farmers’ market. And I can tell you that even the most well-intentioned customers commit some irritating farmers’ market faux pas. So for those of you who aspire to be more conscientious shoppers, I’m going to give you a gift: here are seven tips to avoid driving your farmer crazy this season.

You’re welcome. 1. I know the farmers’ market is a sensual experience like no other, and that it seems like all of the strange and shiny vegetables are calling out for you to touch them—but it’s best to refrain from over-handling. Do you really need to inspect every single bunch of kale to determine which one is a teensy bit bigger than the others? 2. Haggling is a quick way to crush your farmer’s soul. Urban Home Produces Over 6,000 Pounds Of Food Per Year  It's called urban agroecology, and it's changing the way people in urban areas live.

The Dervaes family is no stranger to homegrown food, but you'd be surprised at just how important a factor it is in their everyday lives. The Dervaeses live a mere 15 miles from downtown Los Angeles, but you wouldn't guess it after taking a look around their property. The family of four live on 1/10 of an acre on a 4,000-square-foot farm neighboring a busy highway in Pasadena. 55+ Favourite Plants for Edible Forest Gardens in Ontario (Hardiness Zones 4b/5a) A colleague asked me about my top plants for perennial polycultures in our region (hardiness zones 4b/5a in Ontario and Québec). This is also a popular question on our garden tours and in our classes! From our observations, here's what I came up with... Favourite plants for moderate site conditions (sun to part sun; sandy clay to sand clay loam): Toka plum (Prunus salicina?) Honorable mentions for moderate site conditions: Upcoming hopefuls for moderate site conditions: Manchurian apricot (Prunus mandschurica) – tree; edible fruitfalse indigo (Amorpha fruticosa) – shrub; fixes nitrogensea kale (Crambe maritima) – herbaceous; edible broccoli-like flowersmaximillian sunflower (Helianthus maximilianii) – herbaceous; edible shoots; for pollinators; apparently good deer screenperennial arugula (Diplotaxis tenuifolia) – herbaceous; edible greens for saladsmitsuba (Cryptotaenia japonica) – herbaceous; edible leaves for salads and cooking; for pollinators.