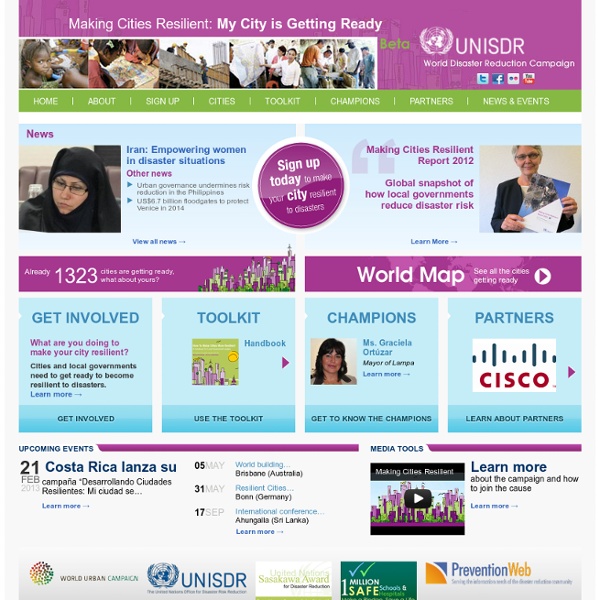 Seven Principles for Big Data and Resilience Projects | 100 Resilient Cities The following is a draft “Code of Conduct” that seeks to provide guidance on best practices for resilience building projects that leverage Big Data and Advanced Computing. These seven core principles serve to guide data projects to ensure they are socially just, encourage local wealth- & skill-creation, require informed consent, and be maintainable over long timeframes. This document is a work in progress, so we very much welcome feedback. Open Source Data Tools - Wherever possible, data analytics and manipulation tools should be open source, architecture independent and broadly prevalent (R, python, etc.). Transparent Data Infrastructure - Infrastructure for data collection and storage should operate based on transparent standards to maximize the number of users that can interact with the infrastructure. Develop and Maintain Local Skills - Make “Data Literacy” more widespread. Ethical Data Sharing - Adopt existing data sharing protocols like the ICRC’s (2013).

E4 The City Resilient Community is the nucleus of urban resilience in a world that grows more turbulent with each passing year. An analysis of almost any crisis strongly supports this notion: In a crunch, people naturally turn toward trusted individuals and institutions. Local knowledge and leadership gain instant currency. Neighbors instinctively help neighbors. This provides a solid conceptual anchor for efforts to improve urban resilience, but raises countless related issues. What is a community? This PopTech Edition grew out of an urban resilience summit by PopTech and the Rockefeller Foundation at the Brooklyn Academy of Music in June 2013. The production and sharing of this work made possible by our sponsors and partners.

ResilientCity Home | ResilientCity Symbiotic Cities | Urban Planning | Architecture | Engineers | Ecologists | Urban Environment Cities’ Elusive Quest for a Post-Industrial Future | Private Sector Development What do rusting industrial cities have in common with outmoded BlackBerries? In this era of constant technological progress, talent mobility and global competition, it's striking how many similarities can be drawn between cities and companies, and the need for both to continuously adjust their industrial strategies to avoid oblivion or bankruptcy. Cities can lose their vigor and vitality just as surely as a once-hot product can lose its cutting-edge cool. Heavy industries like steelmaking and automobile assembly once powered some of the world’s mightiest economic urban areas: Traditional manufacturing industries shaped their identity, giving their citizens income and pride. The same issue has become daunting in recent decades for aging manufacturing regions in the United States, which have suffered the prolonged erosion of their industrial-era vibrancy. The Rust Belt That trio of Midwestern cities – Pittsburgh, Cleveland and Detroit – is iconic in industrial history.

Rebuilding America's Legacy Cities: New Directions for the Industrial Heartland | American Assembly Rebuilding America's Legacy Cities: New Directions for the Industrial Heartland is available for free chapter downloads below or hardcopy at hardcopy available Amazon.com. While we may not yet know enough to offer a road map to create the smaller, healthier city we can imagine, we can begin to put the pieces together to help build that map for cities ready to make the effort to get there. The first step is to acknowledge that change will require not a single step, but many separate, parallel steps along many different paths in order to address the complex and interrelated issues that have led to and that perpetuate the current condition of the nation’s legacy cities. The rich material contained in this volume offers thought-provoking reading for anyone concerned with the transformation of America’s older industrial cities, either with respect to a specific city or from a broader perspective, whether the reader is a policymaker, practitioner, or concerned layperson.

Rust Wire » Blog Archive » Ten Lessons from European Industrial Cities Home » Architecture, Art, Economic Development, Editorial, Featured, Good Ideas, Politics, Public Transportation, Urban Planning 8 October 2013No Comment Dublin - Soure: photorator.com I’ve had the distinct privilege and honor of visiting the great cities of Dublin, Ireland; Glasgow, Scotland; and Manchester, England over the past four years. - Rick Brown The Problem With Calling Cities 'Post-Industrial' Former heavy manufacturing hubs around the Great Lakes like Pittsburgh, Detroit, Cleveland, and Milwaukee often get roped together under the heading of "post-industrial" (when, that is, we're not otherwise identifying them by their prevalence of rust). The term poses at least two problems, though: Industry still exists in many of these places, and the very notion of defining them by their relationship to the past can hamstring us from planning more thoughtfully for their future. “You’ve got the ‘post-war,’ you’ve got ‘post-modern,’ you’ve got ‘post-9/11,’” says Paul Kapp, an associate professor in the school of architecture at the University of Illinois and an editor of the book SynergiCity: Reinventing the Postindustrial City. He was speaking Sunday at the annual meeting of the American Planning Association (hosted in what's often considered the post-industrial city of Chicago). This last asset will inevitably become even more important.

Resiliency vs. sustainability: Can the megacities of the future be both? Photo by Spencer Platt/Getty Images. This article arises from Future Tense, a partnership of Slate, the New America Foundation, and Arizona State University. On the evening of Wednesday, Oct. 24, Future Tense and Scientific American will be hosting an event in New York City on building resilient cities. To learn more and to RSVP, visit the New America Foundation website. If you've successfully flushed a toilet recently, then you appreciate (at least subconsciously) the workings of a good sewer system. Waste disappears, no matter what time of day or night, or what the weather's like. But weather is actually a challenge for a sewer system, especially precipitation. How does New York do it? That's great for keeping sewage from finding other places to go—like back up into your toilet. That isn't exactly sustainable. Sustainability, on the other hand, means efficiency, at least in part, as designers strive to strike a balance between human needs and environmental impacts.