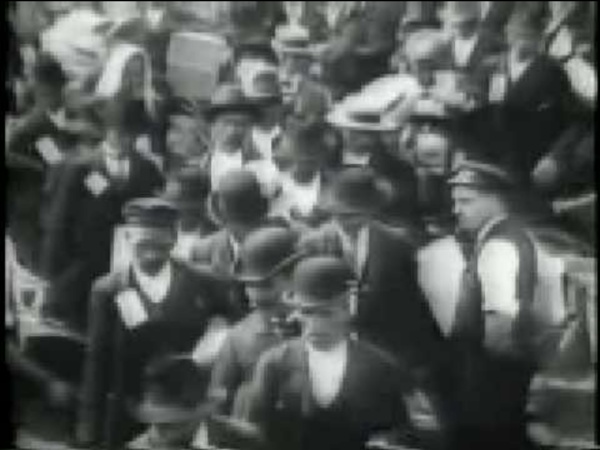 North Texas Institute for Educators on the Visual Arts Prospective immigrants were lined up through a maze of metal fences in the Great Hall at Ellis Island. During busy periods, as many as 5,000 people each day would be checked. Each, in turn, had to undergo both physical inspection and extensive questioning before they were released. For the majority of people, the procedure took between three and five hours. What is your name? The Truth About Columbus Day: Why Are We Celebrating? Supporters of the Resolution changing "Columbus Day" in Seattle to "Indigenous Peoples' Day," September 2, 2014. (Photo: Jacicita)Christopher Columbus was the ISIS of his day. He justified rape, murder and pillage with religion and funded his efforts with whatever he could steal. Today, while millions across America are celebrating Columbus Day, the city of Seattle is celebrating Indigenous Peoples’ Day. That’s because last week, the Seattle city council unanimously passed a resolution to honor the contributions and cultures of Native Americans on the second Monday of October. While Seattle’s decision may seem unusual, it’s actually part of growing trend. Many cities and states across the country have shifted away from celebrating Columbus Day, and that’s because more and more Americans are learning the real history behind Christopher Columbus and his “discovery.” First of all, Columbus didn’t actually discover the Americas, despite what you may have been taught in elementary school.

Poverty Disturbs Children's Brain Development and Academic Performance Income inequality is growing in the U.S., and the problem is much worse than most people believe. For children, growing up poor hinders brain development and leads to poorer performance in schools, according to a study published this week in JAMA Pediatrics. It has long been known that low socioeconomic status is linked to poorer performance in school, and recent research has linked poverty to smaller brain surface area. Using a sample of 389 healthy children and adolescents from age four to 22, psychologist Seth Pollak and his colleagues at the University of Wisconsin–Madison compared scores on academic achievement tests with tissue volume in select areas of the brain. The researchers found that children who grew up in families below the federal poverty line had gray matter volumes 8 to 10 percent below normal development. Pollak was hoping to see the gap closing as children grew older, spent more time in school and outside their homes, but this was not the case.

US History - Ellis Island - Facts - Pictures - Glossary - Listening - Activities - Webquests - Songs - Poems - Videos - Cinema An Interactive Tour of Ellis Island (scholastic.com) Ellis Island, "in Upper New York Bay, was the gateway for millions of immigrants to the United States as the nation's busiest immigrant inspection station from 1892 until 1954..." (Wikipedia) Questions Asked of Immigrants at Ellis Island (art.unt.edu) Ellis Island - History "From 1892 to 1954, over twelve million immigrants entered the United States through the portal of Ellis Island, a small island in New York Harbor..." 3 maps that explain America The United States of America is a young country, but it's also big and complicated and fascinating. It can be tough to distill all that down to a few maps, but here are three that capture the story of America about as well as anything. If you enjoyed this, please read our much more comprehensive 70 Maps that Explain America, which goes through everything from early colonization to slavery and its legacies to the history of American global power. 1) Watch America become the country it is today Esemono This map shows the non-Native American political borders of North America from 1750 (by which point most of the continent had been claimed by European colonial powers) through today. 2) The most common ancestry in every county U.S. The United States considers itself a nation of immigrants, and this map shows just how true that really is. 3) North America's stunning environmental wealth and diversity (Commission for Environmental Cooperation)

Why Preschool Suspensions Still Happen (And How To Stop Them) : NPR Ed Something's wrong in America's classrooms. According to new data from the Education Department, black students — from kindergarten through high school — are 3.8 times more likely to be suspended than white students. Now the really bad news. This trend begins in preschool, where black children are already 3.6 times more likely to be suspended than white students. In all, 6,743 children who were enrolled in public pre-K received one or more out-of-school suspensions in the 2013-14 school year. Glass half-full: That number's down slightly and relatively small considering the 1.4 million kids who, according to the Education Department, attended public pre-K that year. Glass half-empty: That's 6,743 kids too many, say several top child development experts. "To be clear, preschool suspension just shouldn't be a thing for any kid," says Maryam Adamu, who until recently studied early childhood policy at the Center For American Progress. Training and pay for preschool teachers are often abysmal.

Ellis Island - Facts & Summary 1630-1770 Ellis Island is little more than a spit of sand in the Hudson River, located just south of Manhattan. The Mohegan Indians who lived on the nearby shores call the island Kioshk, or Gull Island. In the 1630s, a Dutch man, Michael Paauw, acquires the island and renames it Oyster Island for the plentiful amounts of shellfish on its beaches. 1775-1865 Around the time of the Revolutionary War, the New York merchant Samuel Ellis purchases the island, and builds a tavern on it that caters to local fisherman. Ellis dies in 1794, and in 1808 New York State buys the island from his family for $10,000. Meanwhile, the first federal immigration law, the Naturalization Act, is passed in 1790; it allows all white males living in the U.S. for two years to become citizens. Nearly 5 million people will arrive from northern and western Europe over the next 45 years. Concurrently, large numbers of Germans flee political and economic unrest. 1920-1935 President Warren G. 1998 In 1998, the U.S.

Many Black Cowboys Developed Their Skills in Africa, not America: Little Known Facts About Black Cowboys | Rewinding Black The cowboy remains one of the most popular figures in American culture. Whether chasing bad guys or herding cattle or sitting around the campfire, the cowboy has been immortalized in countless movies, books and television shows. However, he is seldom seen as African American. Despite the lack of Black images, men of color did in fact handle cattle, tame horses, work ranches, encounter outlaws and star in rodeos. According to the Handbook of Texas, Black cowboys have been a part of Lone Star State history since the early nineteenth century. Black cowboys were familiar with bigotry, but some found that they experienced less discrimination on the open range, as cowboys depended on each other regardless of their ethnicity. There are more facts about Black cowboys. Some Black cowboys developed their skills in Africa, not America. Following the Civil War, the cattle industry became a larger part of the Texas economy as a profitable market for beef developed in northern cities.

Preschool To Prison Pipeline: Three Year Old Suspended 5 Times In One Year April V. Taylor As more and more people become aware of the mass incarceration epidemic that has seen America’s prison population grow to be the largest in the world, many are realizing how the school to prison pipeline is a contributing component that activists and politicians have both attempted to address. However, those tackling the issue may not be realizing just how young the school to prison pipeline starts. Powell spoke with the Washington Post, revealing that her oldest son JJ was just four years old when he was suspended from preschool, and while Powell’s own negative experiences in school left her self-esteem shambles, she initially ignored her concerns. It wasn’t until she took her boys to a birthday party for one of their classmates where she had a conversation with other mothers that she began to look at things differently. What was the one glaring difference between JJ and the other children?

Corruption in America: From Benjamin Franklin’s Snuff Box to 'Citizens United' The following excerpt is the introduction to Zephyr Teachout’s new book, Corruption in America: From Benjamin Franklin’s Snuff Box to Citizens United. The Citizens United decision was not merely bad law; it was bad for politics, and displayed an even worse understanding of history. Americans from James Madison onward have argued that it is possible for politicians and citizens alike to try to achieve a kind of public good in the public sphere. Like liberty, speech or equality, corruption is an important concept with unclear boundaries. Corruption in America is my effort to fill in the history that Citizens United ignored. The Supreme Court, along with a growing subset of scholars, began to confuse the concept of corruption and throw out many of the prophylactic rules that were used to protect against it. The contemporary era is full of proverbial diamond-encrusted gifts, although they are less likely to come from the king of France.

Dissent is Patriotic – The Codex Yesterday was the Day of Remembrance, the 75th anniversary of the Japanese American internment during World War II. In remembrance, artists commemorated the experience, communities gathered in solidarity, and families shared their stories. Earlier on January 30, 2017, Google Doodle honored the 98th birthday of Fred Korematsu—a civil rights icon and face of the Korematsu v. United States (1944) Supreme Court case that questioned the constitutionality of the WWII Japanese American internment. During a time, now, when Muslims are targeted by the Trump administration and huge swaths of the American public feel unsafe and unrepresented, Google reminding millions of users of Korematsu’s legacy is no accident. In honor of the Day of Remembrance, it’s important to remember, to revisit the past, and to learn about it’s ripples into our world now. U.S. In the wake of the Japanese attack on Pearl Harbor in December 1941, President Franklin D. Korematsu v. Coded Racism in “Emergency and Peril”