Your Own Edible Rooftop Garden. Green-roof-resource-manual-full-version. Roof ripe for the picking. Nurseryman Fabian Capomolla at the Pop Up Patch on the Federation Square carpark roof. 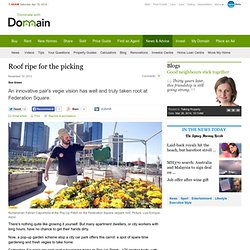 Picture: Luis Enrique Ascui. There's nothing quite like growing it yourself. But many apartment dwellers, or city workers with long hours, have no chance to get their hands dirty. Now, a pop-up garden scheme atop a city car park offers this carrot: a spot of spare-time gardening and fresh vegies to take home. Federation Square's car park roof is becoming home to Pop Up Patch - 176 garden beds, with 140 available for lease. There are 176 garden beds, with 140 available for lease. The scheme is the brainchild of advertising executive turned nurseryman Fabian Capomolla and his business partner, Mat Pember, a landscape gardener.

Advertisement ''We were in discussions with them [Federation Square] about putting in some vegie gardens for their tenants, their restaurants, who were looking to grow some food for themselves,'' Mr Capomolla says. ''It's about education and getting more people to give it a go. New York's secret skyline: Amazing aerial shots give rare glimpse into a hidden rooftop world. By Daily Mail Reporter Published: 12:17 GMT, 5 May 2012 | Updated: 16:28 GMT, 5 May 2012 This incredible collection of aerial photographs taken above New York gives a rare glimpse of a hidden rooftop world. 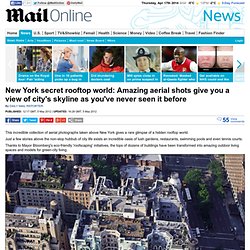 Just a few stories above the non-stop hubbub of city life exists an incredible oasis of lush gardens, restaurants, swimming pools and even tennis courts. 11-564-sr19-role-urban-agriculture-building-resilient-cities. Awsassets.panda.org/downloads/urban_solutions_lc_summary_web.pdf. The CBD greening of Melbourne and Sydney.

The rooftop garden of the City of Melbourne office building in Little Collins Street. 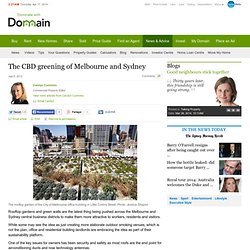 Photo: Jessica Shapiro Rooftop gardens and green walls are the latest thing being pushed across the Melbourne and Sydney central business districts to make them more attractive to workers, residents and visitors. While some may see the idea as just creating more elaborate outdoor smoking venues, which is not the plan, office and residential building landlords are embracing the idea as part of their sustainability platform. One of the key issues for owners has been security and safety as most roofs are the end point for airconditioning ducts and now technology antennas. Call to protect laneways in the name of a gritty city. MORE of Melbourne's grungy laneways will be sold to developers or converted to concrete driveways unless planning is tightened up, heritage advocates have warned. 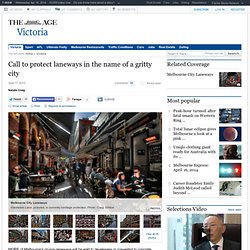 Thirteen laneways, or sections of laneways, have been sold by the City of Melbourne to developers in the past decade, according to a new report by Melbourne Heritage Action. The group says only nine of the city's remaining 190 laneways are protected from sale or redevelopment under the planning scheme. It is petitioning the council to place a moratorium on the sale of laneways while it reviews their significance. ''Selling off laneways and approving inappropriate and bland developments is eroding one of this city's most important economic, heritage, cultural and artistic resources,'' said Rupert Mann, president of the volunteer group, which is endorsed by the National Trust.

Lord mayor Robert Doyle disagreed and said it was ''wrong and offensive'' to say laneways of cultural or historic value were sold. Cities: Engines of Innovation. Crime, congestion and pollution mar all cities, from Los Angeles to Mumbai. 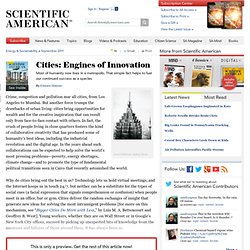 But another force trumps the drawbacks of urban living: cities bring opportunities for wealth and for the creative inspiration that can result only from face-to-face contact with others. The fertile fringe. The last farmer on the swamp Asparagus farmer Joe Vizzarri watches the urban sprawl slowly swamp his Koo Wee Rup swamp. 24, 2012 THERESE Schreurs' celery farm is about to be buried under concrete and bitumen — and she couldn't be happier. 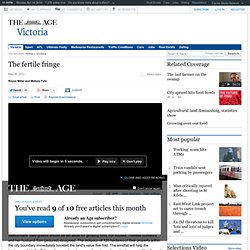 Two of her family's properties at Clyde, near Cranbourne, are among some of Melbourne's key market gardens rezoned in 2010 for the city's newest south-eastern suburb. Casey Council resisted the move, arguing that the sandy loam soils that produce much of Melburnians' daily greens should be set aside for growing food, not houses. "The general public talks about suburbs gobbling up farming land. Tom Schreurs. Tension over the development of Victoria's most productive horticultural areas at Clyde is just one crack opened by an emerging faultline in Australian public policy over farmland and how we use it. Advertisement Planners say much is at stake in the issue of farming versus urban residential development around Melbourne. Melbourne judged world's most liveable city. Melbourne takes top city spot The world's most liveable city index sees Melbourne at number one, but three other Australian cities are in the top ten. 30, 2011 Melbourne has vaulted Vancouver to become the best city in the world to live, according to the latest Economist Intelligence Unit's Global Liveability Survey. 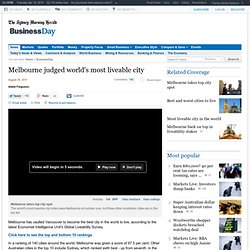 Click here to see the top and bottom 10 rankings.