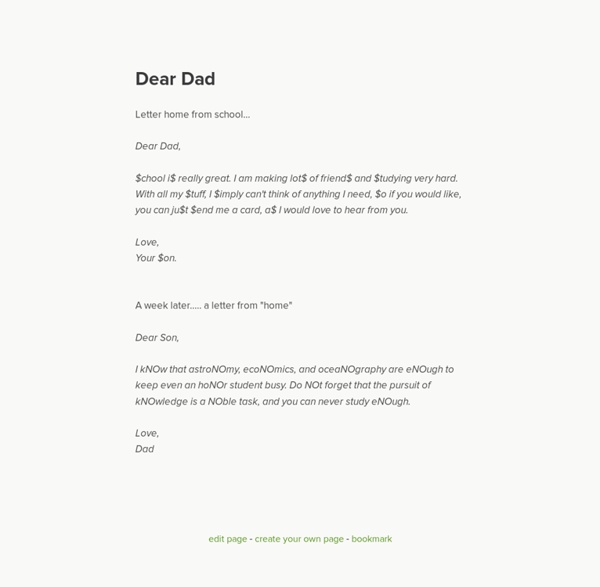 Letter home from school... Dear Dad, $chool i$ really great. I am making lot$ of friend$ and $tudying very hard. With all my $tuff, I $imply can't think of anything I need, $o if you would like, you can ju$t $end me a card, a$ I would love to hear from you. Love,Your $on.

It is possible to understand Engineers - Where theres a will, theres a way. Understanding Engineers #1 Two engineering students were biking across a university campus when one said, "Where did you get such a great bike?" The second engineer replied, "Well, I was walking along yesterday, minding my own business, when a beautiful woman rode up on this bike, threw it to the ground, took off all her clothes and said, "Take what you want." The first engineer nodded approvingly and said, "Good choice, The clothes probably wouldn't have fit you anyway." Understanding Engineers #2 To the optimist, the glass is half-full.

Visiting 10 of the Most Interesting Abandoned Places on Earth Travelers looking for a getaway from the normal getaway should skip the sandy beaches to walk amid silent relics in Namibia, Chernobyl or an abandoned California gold mining town. These empty places may look like Scooby Doo set pieces, but they hold important clues to bigger mysteries about both the past and the future; the creep of urban decay and the necessity of memorializing tragedy. Sometimes history lives alone.

Crazy Illustrations By Chow Hon Lam Chow Hon Lam is a t-shirt designer and a humorous illustrator from Malaysia. He has been completed this crazy project called Flying Mouse 365, which is create 1 design per day. I hope his illustrations can bring some smile and entertainment to the world. About the author Beethoven When Beethoven passed away, he was buried in a churchyard. A couple days later, the town drunk was walking through the cemetery and heard some strange noise coming from the area where Beethoven was buried. Terrified, the drunk ran and got the priest to come and listen to it.

All Geared Up and Raring to Go! This comic was intended to be the way that developers dress their heroines in comparison to the heroes, but I guess it could also represent the way that a lot of male gamers dress up their female characters, as well. Your choice. See Torneko in the comic? He originally appeared in Dragon Quest IV, but he was also the main character from one of my favorite video games ever: Torneko: The Last Hope. Unfortunately, my copy of the game is now unplayable and I need to get another one. This will actually be my third copy of the game when I finally get around to buying it.

Bert Kreischer and His Pranks on Hotel Maids Standup comedian Bert Kreischer is a frequent traveler. He often has to check into hotels during his travels. Being a comedian, Bert has a terrific sense of humor that makes him pull a prank on the hotel maids. Whenever Bert is checking out, he remembers to leave the hotel maid a present. Source: All of these images were tweeted by Bert Kreischer himself. Check out pictures of Bert’s presents below.

Lesson Plan for Making a Speaker Laboratory ©1995 The Regents of the University of California by Regan Lum Introduction: A speaker is a device that converts an electronic signal into sound. The speaker you will build (see figure 1) consists of a Styrofoam or paper cup, a coil of wire, a permanent magnet, and a signal source. How To Steal Like An Artist (And 9 Other Things Nobody Told Me) - Austin Kleon Wednesday, March 30th, 2011 Buy the book: Amazon | B&N | More… Here’s what a few folks have said about it: “Brilliant and real and true.” Hedvig and the Angry Itch - Pamela Essie's Blog So, last weekend, the hubby and I and a friend are hiking a mountain. We're about 2 miles high and I'm fighting a little bit of some altitude sickness; ya know a little tunnel vision, little dizziness, no big deal. Anyways, my cell phone rings, to which I answer, "Holy crap I get reception up here?" So after some laughter on the other end and a description of exactly where I'm at, my mom asks me, "Hey whats that title of that movie with the itch in it."

Lost in Translation - Cross-language computer translation "Language is the source of misunderstandings." — Antoine de Saunt-Exupéry in The Little Prince Important: Systran, which for years provided our translation functionality, shut down their service in May. We're now using Google Translate. Unfortunately, the Google Translate API has been officially deprecated as of May 26, 2011. Google's API will be shut off completely on December 1, 2011. Therefore, barring the emergence of new, publicly-available machine translation API, this site will disappear on December 1, 2011. A Father Who Creatively Captures His Kids (20 photos) If there was a prize that could be given out to the most creative father, I'd hope that it was awarded to Jason Lee. A wedding photographer by day, he's used to capturing some of the most important moments in a couple's lives. As a longtime fan of Jason's photos on Flickr however, I think the real magic happens when he turns the camera onto his daughters. Sure, his children are adorably cute in their own right, but that's not what makes his photos so interesting.

30 of the World's Greatest Wedding Cakes Few things are more important on a wedding day (apart from both partners turning up; the ring being secure; and nobody objecting during the ceremony) than the cake. Very few weddings are without such a centrepiece. It's just a shame that so many couples opt for the same traditional, boring designs when there is so much opportunity to impress and surprise the guests. Here are 30 brilliant examples, to be used as inspiration for your own big day. Above: A wedding cake fit for an action hero. Above: An illustration of things to come?