Stickers, T-shirts, Mugs on UNIX & Programming. 21 Best GIFs of All Time of the Week from best GOAT. Unlikely: The Impossible and Improbable Objects of Giuseppe Colarusso. In this ongoing series titled Unlikely, artist and photographer Giuseppe Colarusso imagines bizarre and humorous objects, each of which is either technically impossible, improbable, or simply useless in its proposed design. 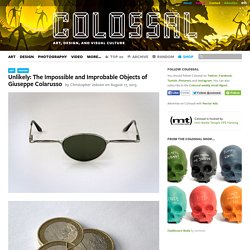 Colarusso tells me via email that many of the pieces he fabricates himself, however some are digitally created in Photoshop. So what’s the point? He hopes each image will make you stop, think and hopefully bring a smile to your face, which is definitely a worthy cause. Also, I would pay top dollar for that spray paint can with adjustable hue sliders, so could somebody make that? See some 50+ additional concepts over on his website. 31 GIFs That Will Make You Laugh Every Time. Series of offensive jokes - you've been warned : Jokes. The_coding_love(); Asdfmovie 1,2,3,4,5,6,7 (ENGLISH) Game Fails: Best 10 Fails of 2012. Video. Os Portugueses e os Minhotos: João Seabra - TEDxVimaranes. Things You'd Better Not Mix Up. Clairvoyant Fail (english subtitles) Vacas "chipadas" podem reduzir emissões de metano. A Huge List of Cool Stuff. The Restart Page - Free unlimited rebooting experience from vintage operating systems. 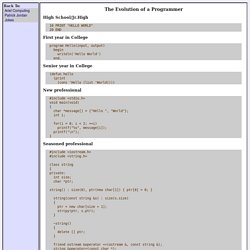 " bob@b12 Bob, could you please write me a program that prints "Hello, world. "? Senior Manager % zmail jim I need a "Hello, world. " program by this afternoon. Chief Executive % letter letter: Command not found. % mail To: ^X ^F ^C % help mail help: Command not found. % damn! Anonymous If you enjoyed this, you might like: Reasons_why_people_who_work_with_computers_seem_to_have_a_lot_of_spare_time.png (PNG Image, 640 × 530 pixels)

If historical events had Facebook updates... Ultimate Drunk Compilation Of 2011 ll FWAM. Like a boss : Crazy Liver. How to Hunt Elephants. MATHEMATICIANS hunt elephants by going to Africa, throwing out everything that is not an elephant, and catching one of whatever is left. 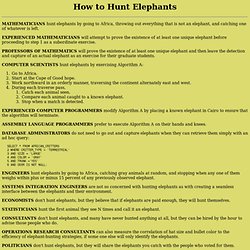 EXPERIENCED MATHEMATICIANS will attempt to prove the existence of at least one unique elephant before proceeding to step 1 as a subordinate exercise. PROFESSORS OF MATHEMATICS will prove the existence of at least one unique elephant and then leave the detection and capture of an actual elephant as an exercise for their graduate students. COMPUTER SCIENTISTS hunt elephants by exercising Algorithm A: Go to Africa. Start at the Cape of Good hope. EXPERIENCED COMPUTER PROGRAMMERS modify Algorithm A by placing a known elephant in Cairo to ensure that the algorithm will terminate. ASSEMBLY LANGUAGE PROGRAMMERS prefer to execute Algorithm A on their hands and knees. DATABASE ADMINISTRATORS do not need to go out and capture elephants when they can retrieve them simply with an ad hoc query: STATISTICIANS hunt the first animal they see N times and call it an elephant. 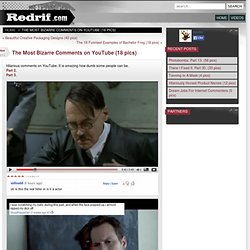 It is amazing how dumb some people can be.Part 2.Part 3.

Related:  A Huge List of Cool Stuff   -  The Restart Page - Free unlimited rebooting experience from vintage operating systems   -  If historical events had Facebook updates...   -  Like a boss : Crazy Liver   -  Just for Fun!   -  The Bored Ninja – Fun, Interesting, and Cool Stuff on the Internet   -  CollegeHumor - Funny Videos, Funny Pictures, Funny Links!   -  Unhear it - get that damn song out of your head!   -  Education   -  Enterprise