Can You Make It Through This Post Without Getting Pregnant. Jeremy Clarkson's 9 most outspoken moments. Top Gear presenter is no stranger to controversy... 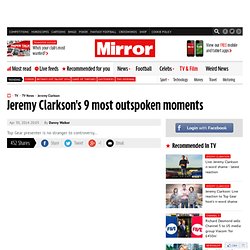 Top Gear presenter Jeremy Clarkson is no stranger to controversy. Earlier this year he found himself at the centre of an alleged racism row after appearing to mock Thai people. "That is a proud moment - but there's a slope on it," said Clarkson, as a figure walked towards himself and Richard Hammond on a bridge. Richard Hammond replied, indicating the bridge's surface: "You're right, it's definitely higher on that side. " Following the show, Clarkson tweeted his thanks to viewers - and included another loaded reference, relating to an alcoholic Thai drink. 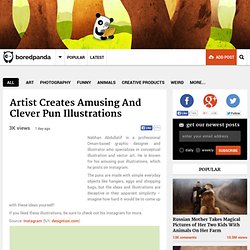 He is known for his amusing pun illustrations, which he posts on Instagram. The puns are made with simple everyday objects like hangers, eggs and shopping bags, but the ideas and illustrations are deceptive in their apparent simplicity – imagine how hard it would be to come up with these ideas yourself! If you liked these illustrations, be sure to check out his Instagram for more. Source: Instagram (h/t: designtaxi.com) 21 Jokes So Clever That You Won't Probably Won't Get Them...Definitely Won't. Humor is subjective. 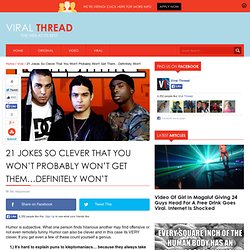 What one person finds hilarious another may find offensive or not even remotely funny. Humor can also be clever and in this case its VERY clever. If you get even a few of these count yourself a genius. 1.) It’s hard to explain puns to kleptomaniacs… because they always take things literally. 22 Exact British Versions Of Important American Things. Man Writes The Greatest Complaint Letter Ever To Airline For Having To Sit Next To An Obese Person. Dear Jetstar, Do you like riddles? 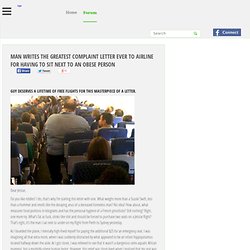 I do, that’s why I’m starting this letter with one. What weighs more than a Suzuki Swift, less than a Hummer and smells like the decaying anus of a deceased homeless man? No idea? How about, what measures food portions in kilograms and has the personal hygiene of a French prostitute? Still nothing? 32 Of The Greatest Things That Happened On Tumblr In 2014. 29 Magical Disney Princess Snapchats. 25 One-Star Reviews People Actually Left For Famous Tourist Attractions. Life In Your Early Twenties Vs. Your Late Twenties. 24 Photos You Need To Really Look At To Understand. 15 Things All Drunk Girls Do. All in all, drunk girls are a unique breed. 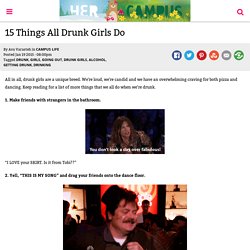 We're loud, we're candid and we have an overwhelming craving for both pizza and dancing. Keep reading for a list of more things that we all do when we’re drunk. 1. Make friends with strangers in the bathroom. “I LOVE your SKIRT. 2. Disclaimer: You will yell this regarding six different songs throughout the night. 3. Otherwise known as the college-girl mating call. 4. “And mozz sticks. 5. Because you serrriously do. 6. Because if you don’t put up a Snapchat Story, how will people even know that you went out?

7. “Can you believe she did that? 8. Ignore the pointed glares from across the bar. 9. Forget duck lips; it's all about the strong brow game. 10. “It goiong down we r yelling timber hah a h rite? 11. "Where are you from?? 12. When the seal has been broken, anywhere will have to do. 13. "Heyyyyyyyyyyyyy" The more Ys you put, the chiller you are. 14. *Takes baby steps and walks with little T-rex arms* *Falls anyway* *Repeats* 15. "I’m FINE. " 21 Times Tumblr Proved English Is The Worst Language Ever.