You only had one job, bread man. Riding like a boss. Basketball MVP. Wet floor. He is innocent. Arrested during haircut. It's Stephen, with a ph... Yes, this is Phteven. Nice job. Why women carry a huge purse. Interesting name. Where rich people live using Google maps. Women pass judgement on someone within 20 seconds of meeting them. By Daily Mail Reporter Updated: 03:13 GMT, 28 May 2011 Never mind the hours spent choosing new clothes, applying make-up and getting your hair just right: if you care what other women think, the priority should be squeezing in your waistline. 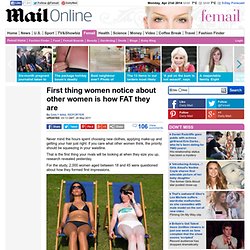 That is the first thing your rivals will be looking at when they size you up, research revealed yesterday. For the study, 2,000 women aged between 18 and 45 were questioned about how they formed first impressions. Does my bum look big in this? The first thing women do when they meet one another is to compare figures The majority admit to reaching an opinion on another woman in a matter of seconds purely by judging their appearance.

Eight in ten admitted they judged other women when they met them for the first time, although one in six claimed they didn’t mean to. While 54 per cent said they first looked at the size of a woman’s waist, 45 per cent said they checked whether they wore too much make-up. Twilight in a nutshell. You're next. Craiglist - laptop for sale - brand snvs. If Popular Superheroes Were Angry Birds Characters. Muppets + Muppets = Angry Birds. What a bitch ! Soldier custom. Vintage computer keyboard. When you see it. Expectations in Computer Science. Most Unfortunate Advertising Placements. Tired of being fat and ugly? Discount brothel. Problems with beef/horse meat? 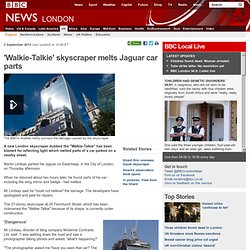 Martin Lindsay parked his Jaguar on Eastcheap, in the City of London, on Thursday afternoon. Balanced breakfast. Walle. Siri spying for the NSA? The minions embodying famous characters. Flat tire - Alaska. Suspicious Water Fountain. Hipster Lawnmower. Smart Kid. Follow up to yesterday's "send pizza" post. The 4th floor of the Children's Hospital in Los Angeles had a pizza party. I'm so confused. Yard Sale at Latino neighborhood. Latin Walmart. Poor bass player. The story of 20 toes in 20 minutes. Plunger. The way I see a banana. 20 of your favourite euphemisms. A Magazine feature about some well-known euphemisms got readers thinking about some of their favourites. 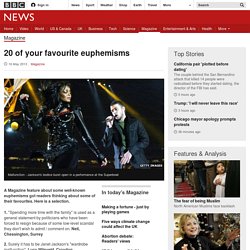 Congressman Mark Sanford has returned to frontline politics after ensuring "hiking the Appalachian Trail" became a euphemism for infidelity. 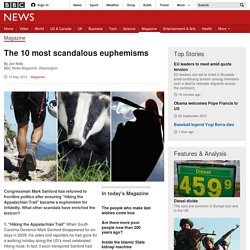 What other scandals have enriched the lexicon? 1. "Hiking the Appalachian Trail" When South Carolina Governor Mark Sanford disappeared for six days in 2009, his aides told reporters he had gone for a walking holiday along the US's most celebrated hiking route. In fact, it soon transpired Sanford had been with his Argentine mistress in Buenos Aires. The phrase quickly ignited the imaginations of the press corps. What to watch on netflix. What a Facebook redesign would be like in real. F-117 Stealth fighter. The Mistery Machine. Bike and Windows XP Background.

This photo was taken at the Palouse highway just north of Pullman WA. The original Windows XP background was captured in Sonoma County, California. – nnolasco

Oh, That's Why Cars In Horror Movies Never Start The First Time. LAUNCELOT: We were in the nick of time, you were in great peril. 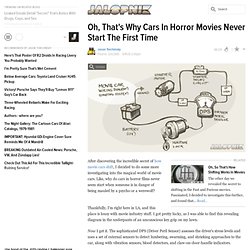 GALAHAD: I don't think I was. LAUNCELOT: Yes you were, you were in terrible peril. Local coffee shop fooling around with McDonalds. Bored writing down on the order pad? Who doesn't love a happy ending to a feel good story? Picasso vs. Dali. How to recognize the artists of paintings. The endless loop of going late to bed. Back to the future - with the Windows logo. Hands against the wall. Hey, you too. Ant vs. chopper. iOS6 - iOS7 comparison. Venn Diagram Breakfast Menu. Every girl on campus. Juicy what? Australia according to Brits.