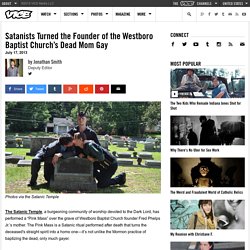 The Pink Mass is a Satanic ritual performed after death that turns the deceased's straight spirit into a homo one—it’s not unlike the Mormon practice of baptizing the dead, only much gayer. On Sunday the Satanic Temple, which first came into the national spotlight last January when the organization announced its support for Florida Governor Rick Scott, went to the Phelps family graveyard in Mississippi to perform the ritual. (Two Pink Masses were performed, one with a female couple and another with men.) I contacted Lucien Greaves, the Temple’s spokesperson and officiator of the ceremony, to find out what exactly the Pink Mass entials. The idea for the mass came about in April, when the WBC announced their intention to protest the funerals of the Boston Bombing victims.

The Subtle Art of Not Giving a Fuck. Zelda - Oracle of Ages. The Cephalopod Monster Secretly Living in Your Attic Requests That You Take this Brief Survey. Please rate the following statements on a scale from 1-5, where 5 is strongly agree and 1 is strongly disagree. 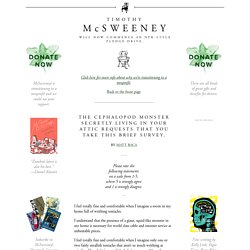 Today I Learned Something about My Boyfriend That No Girl Should Ever Have to Discover. 13 New Amazing Life And Food Hacks You Need to Know - Social DoseSocial Dose. The 9 Manliest Names in the World. Our culture is full of manly men doing manly things. 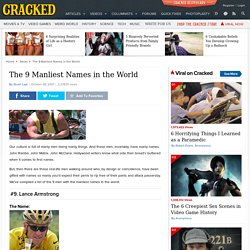 And those men, invariably, have manly names. John Rambo. John Matrix. John McClane. Hollywood writers know what side their bread's buttered when it comes to first names. But, then there are those real-life men walking around who, by design or coincidence, have been gifted with names so manly you'd expect their penis to rip free of their pants and attack passersby. . #9. The Name: It's impossible to hear this name without picturing many men getting impaled on a battlefield. The Man: Some will argue that we should have gone with the guy who walked on the moon instead of the guy who rides bikes for a living.

Untitled Document. Angry squirrel I don't know who wrote this, but he tells it quite visually and it's sure worth a laugh or two...If nothing else gives you a good belly laugh this year this will and will last the whole year. 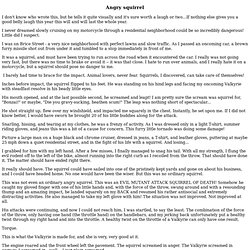 I never dreamed slowly cruising on my motorcycle through a residential neighborhood could be so incredibly dangerous! Little did I suspect. I was on Brice Street - a very nice neighborhood with perfect lawns and slow traffic. As I passed an oncoming car, a brown furry missile shot out from under it and tumbled to a stop immediately in front of me. It was a squirrel, and must have been trying to run across the road when it encountered the car. The face of regret.

It's Time To Get Classy. S Curiosities. Funny Quotes and One-Liners. As powerful as inspirational quotes can be, sometimes we just need a bit of humor to lighten up our day. 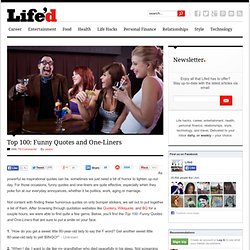 For those occasions, funny quotes and one-liners are quite effective, especially when they poke fun at our everyday annoyances, whether it be politics, work, aging or marriage. Not content with finding these humorous quotes on only bumper stickers, we set out to put together a list of them. After browsing through quotation websites like Quotery, Wikiquote, and BQ for a couple hours, we were able to find quite a few gems.

Below, you’ll find the Top 100: Funny Quotes and One-Liners that are sure to put a smile on your face. 1. ”How do you get a sweet little 80-year-old lady to say the F word? 2. 3. 4. ”Nothing sucks more than that moment during an argument when you realize you’re wrong” - Unknown 5. 6. 7. 8. 9. 10. 11. 12. 13. 14. 15. 16. ”If you die in an elevator, be sure to push the up button.” - Sam Levenson 17. 18. 19. College.essay. This is an actual essay written by a college applicant. The author, Hugh Gallagher, now attends NYU. 3A. ESSAY: IN ORDER FOR THE ADMISSIONS STAFF OF OUR COLLEGE TO GET TO KNOW YOU, THE APPLICANT, BETTER, WE ASK THAT YOU ANSWER THE FOLLOWING QUESTION: ARE THERE ANY SIGNIFICANT EXPERIENCES YOU HAVE HAD, OR ACCOMPLISHMENTS YOU HAVE REALIZED, THAT HAVE HELPED TO DEFINE YOU AS A PERSON?

I am a dynamic figure, often seen scaling walls and crushing ice. I have been known to remodel train stations on my lunch breaks, making them more efficient in the area of heat retention. I translate ethnic slurs for Cuban refugees, I write award-winning operas, I manage time efficiently. Fun Latin. Inspiration for the Uninspired.