Unhear it - get that damn song out of your head! 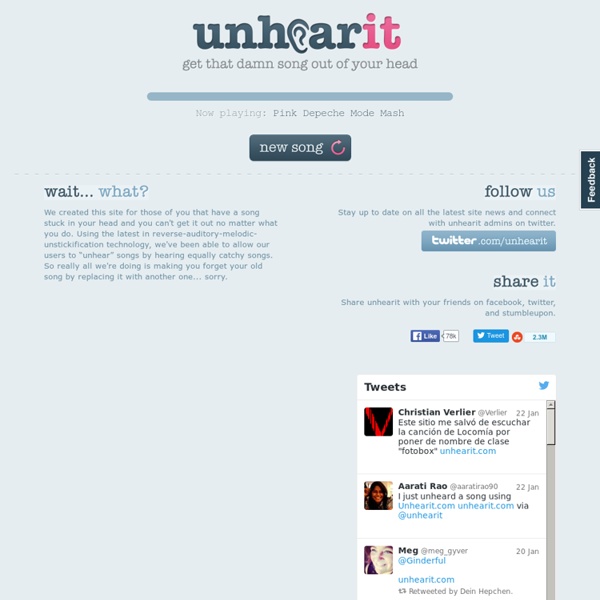 Unhear it get that damn song out of your head : file_get_contents() [ function.file-get-contents ]: Filename cannot be empty in on line Now playing: New song Wait... what?

14 fun and odd facts you probably didn’t know A12-week-old macaque – who was abandoned by his mother – was close to death when it was rescued on Neilingding Island, in Goangdong Province. After being taken to an animal hospital his health began to improve but he seemed spiritless – until he developed a friendship with a white pigeon. The blossoming relationship helped to revive the macaque who developed a new lease of life. 7 Videogame Cocktail Recipes From The Drunken Moogle See more videogame recipes at The Drunken Moogle. And submit your own drink recipe to the Dorkly Facebook page for consideration! Metroid (Metroid Cocktail) Ingredients:1/2 shot Bacardi Big Apple Rum1/2 shot Coconut Rum1/2 glass Kiwi Strawberry Minute Maid (or Kool-Aid)A little less than 1/2 a glass Sprite3 Strawberries Directions: Shake the two rums and Kiwi Strawberry Minute Maid and pour into a lowball glass. Add the Sprite for a bit of flavor and carbonation.

Running the Numbers - An American Self-Portrait An American Self-Portrait by Photographer/artist Chris Jordan Plastic Bottles, 2007 60x120" Pierogi Recipe October 2, 2010 My mom is obsessed with keeping a stocked freezer, but I guess I don’t really take after her, because my freezer tends to be relatively empty, aside from random containers of stock/ramen broth, frozen dumplings and pierogi. I admit, I store buy frozen chinese dumplings and pierogi for those times that I just don’t feel like cooking.

Apple Pies I know, I’ve made a few pies lately. But see how these are different? Look at how adorable these are! I mean, come on. Could you resist? I sure couldn’t. The Comfort of Eggs in a Basket Eggs in a basket was the first meal I ever cooked. I was in 5th grade, and it was a Sunday morning at my best friend's house after a sleepover. We woke up hungry, and for some reason his parents weren't home. Baked Egg Boat recipe Breakfast is my favorite meal. I like to drink iced coffee and watch the cream climb its way down the chunky ice cubes in a dazy before the caffeine hits. I like to order bacon with whatever I’m eating. I like eating potatoes with ketchup. I like eggs over easy, and fluffy scrambled eggs. I pretty much like everything there is to like about breakfast.

How to Make Caramel Apple Shots Photo: Michelle Oddis Once in a while, a party trick comes along that grabs our attention. Food blogger Michelle Oddis of That's So Michelle loves making caramel apple shots we can't imagine anyone would turn down. Using, wait for it, real fruit and time-tested formulas for tasty, jiggly shots that stay put in their edible "shotglasses," Michelle's gotten Food Republic on the gimmicky Halloween bandwagon we've been resisting so fiercely. Try out these irresistible boozy apple treats (and don't hold your breath for a candy corn cocktail on our end).

Avocado Mac and Cheese Recipe My avocado obsession continues, this time with Stovetop Avocado Mac and Cheese! If you like our Creamy Avocado Pasta, you will love this decadent macaroni and cheese. It is basically the same delicious pasta, but kicked up a notch. Josh thought I was a little looney when I told him what we were having for dinner, but after one bite, he was in mac and cheese heaven. Baked Eggs with Bacon and Spinach Do y’all remember the scene in Runaway Bride (that’s an Oscar contender if I’ve ever seen one…) where Julia Roberts realizes that she doesn’t know how she likes her eggs? You know, because she’s always turning herself into the girl that the guy she’s marrying wants to be with? Yeah. That’s not me.