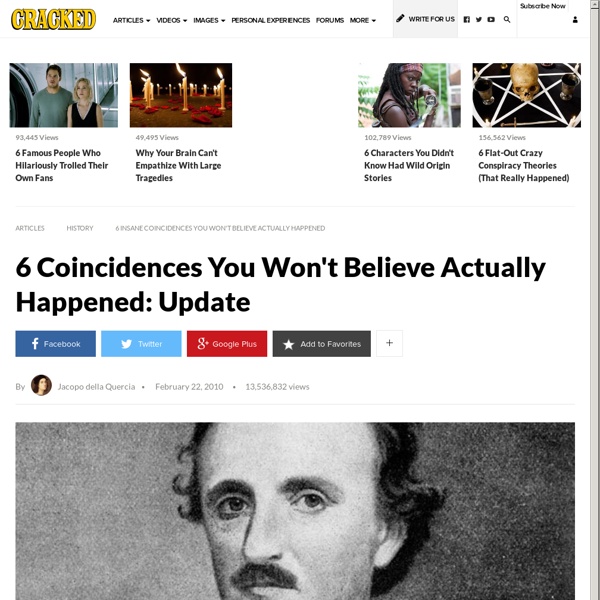 America's Freak Luck During the Battle of Midway The Battle of Midway may be remembered as one of the most spectacular naval battles in history and one of the huge turning points in the Pacific theater, but it started out as a pure clusterfuck for the Americans. Despite going into battle with most of Japan's game plan in their pocket thanks to American codebreakers/Bothan spies, the U.S. Navy had little to show for it in the early hours of June 4, 1942. Just about every aircraft that took on the Japanese that day was destroyed, and all without delivering any serious damage. In short, the Battle of Midway started off like the Battle of Endor, only with every fighter in the Rebel Fleet crashing into the Death Star's deflector shield. Where it Gets Weird: There was one squadron of American dive bombers lead by Lieutenant Commander C. His squadron started dropping like flies until, in an act of sheer luck that would make even J.K. Where it Gets Even Weirder: ...when he wasn't busy being a pimp.

I write for myself and I'll say anything I damn well please Transcripts follow. (Source: Dexter; Image above, via NME.) Transcript December 2, 1996 Green Day P.O. The 5 Most Insane Moments in Indian Comic Books 1980s Indian comic books were the best. Sometimes the English translation was baffling, other times the plots were inscrutable, and -- if you were really lucky -- these twain did meet, and you were transported to a realm of semi-unreadable fantasia. Here are five such glorious occasions. #5. Superman Goes to India, Gets Casual About Murder AlanHunt.Ca

Poodwaddle POODWADDLE WORLD CLOCKThe World Stats Counter (V 7.0) This minute 250 babies will be born, 100 people will die, 20 violent crimes will be reported, and the US debt will climb $1 million. The World Clock tells more than time. These 31 charts will destroy your faith in humanity Earlier this week, Rob Wile of Business Insider posted his graph-heavy opus: "31 Charts That Will Restore Your Faith In Humanity." Naturally, we here at Wonkblog were all eager to see the results. But we'd quibble a bit with Wile's interpretations of the data. His charts all struck us as horrible news. So we're re-analyzing them here with the proper, gloom-heavy spin: 1) Inter-state wars are on the rise since 2002.

20 Great Websites To Earn Part-time Money While Working In College There are literally thousands of ways to make money online. They range from affiliate marketing, blogging, domain parking, web designing and many more. But most of them, like any other real world business require time and patience to bring in a decent amount of cash every month. The 6 Creepiest Places on Earth It doesn't matter whether or not you believe in ghosts, there are some places in which none of us would want to spend a night. These places have well earned their reputations as being so creepy, tragic or mysterious (or all three) that they definitely qualify as "haunted." Places like... Aokigahara is a woodland at the base of Mount Fuji in Japan that makes The Blair Witch Project forest look like Winnie the Pooh's Hundred Acre Wood. It probably has something to do with all the dead bodies scattered around. What Niagara Falls is to weddings, Aokigahara is to suicide.

The average destination of international flights from every country in the world For the United States, it’s in the middle of a Quebecois forest. Hong Kong’s is near Wuhan, in the heart of China. France’s is in France. Scientists discover how the brain encodes memories at a cellular level (Santa Barbara, Calif.) –– Scientists at UC Santa Barbara have made a major discovery in how the brain encodes memories. The finding, published in the December 24 issue of the journal Neuron, could eventually lead to the development of new drugs to aid memory. The team of scientists is the first to uncover a central process in encoding memories that occurs at the level of the synapse, where neurons connect with each other. "When we learn new things, when we store memories, there are a number of things that have to happen," said senior author Kenneth S. Kosik, co-director and Harriman Chair in Neuroscience Research, at UCSB's Neuroscience Research Institute.

6 Real Islands Way More Terrifying Than The One On 'Lost' Summer's right around the corner, and it's time to pick your next vacation spot. Now, we know the problem you're facing: You want a nice island paradise, but you also want to experience horrors beyond comprehension, and maybe you even want to die on your trip. Well, we've got some great islands for you... Ilha de Queimada Grande; A.K.A. Snake Island Over at Forests.org, there's an article that opens with a description of, "A deserted island where the forest floor writhes with the world's most venomous vipers.

Top 10 Strangest Things In Space Space Let’s be honest: space is an absolutely crazy place. Most science fiction writers throw in a planet with two stars that looks vaguely like Southern California, and call it a day.