The Evolution of a Programmer 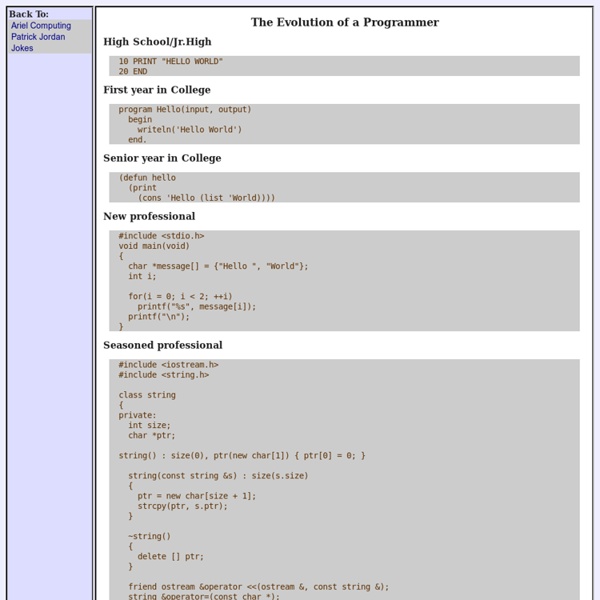 And now for something completely different This is a minimal crash-course in the programming language Python. To learn more, take a look at the documentation at the Python web site, www.python.org; especially the tutorial. If you wonder why you should be interested, check out the comparison page where Python is compared to other languages. This introduction has been translated into several languages, among them Portuguese, Italian, Spanish, Russian, French, Lithuanian, Japanese, German and Greek, and is currently being translated into Norwegian, Polish, and Korean. Since this document still might undergo changes, these translations may not always be up to date. Note: To get the examples working properly, write the programs in a text file and then run that with the interpreter; do not try to run them directly in the interactive interpreter - not all of them will work. To begin with, think of Python as pseudo-code. x,y,z = 1,2,3 first, second = second, first a = b = 123 The first two examples are equivalent. Simple, isn’t it? print b

Stanford CS Ed Library The brick-road-laying Tiger Stone - Image 1 of 6 Laying down paving bricks is back-breaking, time-consuming work... or at least, it is if you do it the usual way. Henk van Kuijk, director of Dutch industrial company Vanku, evidently decided that squatting/kneeling and shoving the bricks into place on the ground was just a little too slow, so he invented the Tiger Stone paving machine. The road-wide device is fed loose bricks, and lays them out onto the road as it slowly moves along. A quick going-over with a tamper, and you’ve got an instant brick road. View all One to three human operators stand on the platform of the Tiger Stone, and move loose bricks by hand from its hopper to its sloping “pusher” slot – the bricks do have to be fed into the pusher in the desired finished pattern. The tread-tracked machine is electrically-powered, and has few moving parts, so noise and maintenance are kept to a minimum. Via Gizmodo. About the Author Post a CommentRelated Articles Just enter your friends and your email address into the form below

YAPH: Management Technique Staffing Hire the best employees you can possibly afford then ignore their input, micro-manage them and second guess their decisions. Recognize employees who develop new or extend existing skills by putting others in charge of related projects. Keep staffing levels critically low. Hire consultants to "relieve" the workload. I wish to thank the effete, small-minded corporate toadies who brought the existence of this page to the notice of management. Center for Democracy & Technology- Free Speech OnlineElectronic Frontier Foundation (EFF) "Censorship & Free Expression" Archive

CGI - Simple Common Gateway Interface Clas CGI - Simple Common Gateway Interface Class This perl library uses perl5 objects to make it easy to create Web fill-out forms and parse their contents. This package defines CGI objects, entities that contain the values of the current query string and other state variables. Using a CGI object's methods, you can examine keywords and parameters passed to your script, and create forms whose initial values are taken from the current query (thereby preserving state information). The module provides shortcut functions that produce boilerplate HTML, reducing typing and coding errors. It also provides functionality for some of the more advanced features of CGI scripting, including support for file uploads, cookies, cascading style sheets, server push, and frames. CGI.pm also provides a simple function-oriented programming style for those who don't need its object-oriented features. The current version of CGI.pm is available at The examples in this document mainly use the object-oriented style. :cgi

Free Java Tutorials & Guide | Java programming source code Wireless Electricity is Real and Can Change the World A revolution in the method of transmitting and receiving power is taking place, and the results as it pertains to the everyday consumer may not be far behind. In fact, some forms of the technology will be made available this year. Picture yourself never having to worry about recharging your phone, IPod or laptop as long as you were inside a wireless energy zone. That zone can be located in your house, on the train, in the airport, or at your workplace. “Laptop batteries are always burning out and always need a charge. What we did was build a coil into a standard laptop computer and it gets its source from behind a wall in your office,” said Eric Giler, president and CEO of WiTricity. With major competition along many different technological avenues of bringing wireless power to the market, it’s almost assured that some form or another will be used in the mainstream before too long. The ramifications of such technology hitting the market are endless.

Stupid Patent This "business process on the Internet" patenting is patently ridiculous. The patent office is now allowing the patenting of goals, not just technology. It is getting extremely silly. They are simply taking common, unpatentable physical or verbal processes, and patenting the act of making an electronic version of them. Did anybody successfully patent delivering goods by car when horses started to fall out of style in the 1900's? Just because a common practice happens using 1's and 0's instead of by phone or on a piece of paper is no reason to be granted a patent. For example, one man has a patent for "sending moving images over the Internet" [paraphrased]. I almost suspect bribery at the patent office. STOP THIS NONSENSE! For you programmers out there, here is the algorithm to generate stupid patents of the type being accepted and abused right now: That is the simple recipe for stupid e-patents. Possible Solution - Fixed Percents Main

PHP Tutorial Introduction Up until recently, scripting on the internet was something which very few people even attempted, let alone mastered. Recently though, more and more people have been building their own websites and scripting languages have become more important. Because of this, scripting languages are becomming easier to learn and PHP is one of the easiest and most powerful yet. What Is PHP? PHP stands for Hypertext Preprocessor and is a server-side language. Why PHP? You may be wondering why you should choose PHP over other languages such as Perl or even why you should learn a scripting language at all. Using scripts on your website allows you to add many new 'interactive' features like feedback forms, guestbooks, message boards, counters and even more advanced features like portal systems, content management, advertising managers etc. What Do I Need? As mentioned earlier, PHP is a server-side scripting language. Writing PHP Writing PHP on your computer is actually very simple. Declaring PHP