TOP 100 funniest one-liners, quotes and jokes on the internet! Part 1 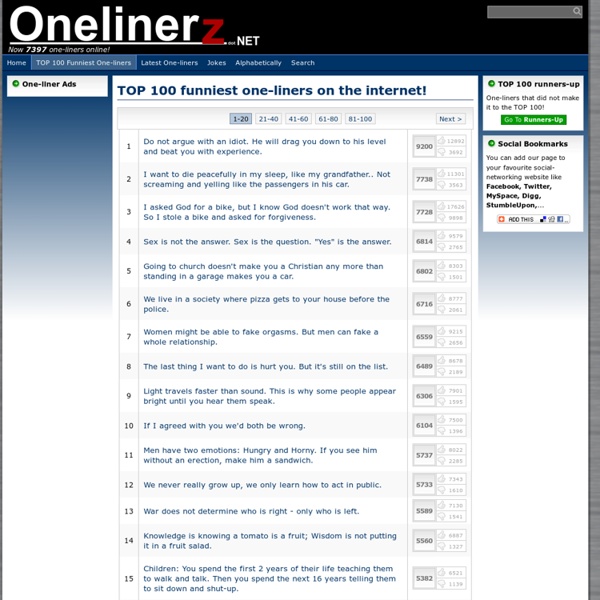 Fails Pictures Posted On 04/14/2014 Loading more fun... Stand by... Pictures Taken Exactly At The Wrong Time July 21, 2009 | 45 Comments and 0 Reactions | Topics: LOLs , main Loading ... Other Stories You Might Like Hot Stories Around The Web What If Everybody in Canada Flushed At Once? Written by Pats Papers | Monday, 8 March 2010 2:42 PM The water utility in Edmonton, EPCOR, published the most incredible graph of water consumption last week. By now you’ve probably heard that up to 80% of Canadians were watching last Sunday’s gold medal Olympic hockey game. So I guess it stands to reason that they’d all go pee between periods. But still—the degree to which the water consumption matches with the key breaks in the hockey game is stunning. Payback: Lawyers on Both Sides of Collection are Feeling Debt’s Sting - Magazine "It's death by a thousand cuts." —Robert Markoff (Photo by Jim Newberry) Adam Krohn sues debt collectors for unfair practices, but he found himself in a role reversal last year when calling a fellow California lawyer who owed him money on a judgment.

Well Timed Photographs Photography Photographs taken at exactly the right moment. Some Perfectly Timed Photos – Part II If the first set of Perfect Timed Photos and Funny Roller Coaster Moments wasn’t enough for you, then this set of perfectly timed photos might do it. I don’t know about you guys but this will surely help me get through the rest of the week. [Source: PerfectlyTimedPhotos] Posted on November 10, 2010 Got something to say? Leave me a comment! Passive Aggressive Notes - Funny Passive Aggressive Note There seems to be a trend towards not confronting our problems. People are, more and more, avoiding conflict and becoming passive aggressive in how they deal with it. Fortunately, sometimes that passive aggressive way of dealing with problems is funny, and sometimes those funny passive aggressive notes people like to leave behind get photographed. Which is your favorite passive aggressive note. The yellow sticky note was kind, the blue tape with the question on it was just asking for somebody named Dave to steal all of their tea and drink it. It’s a pretty big assumption that the person you’re leaving notes to is also a Christian.

Pop Icons In Another Light Part 2 (PICS 22 Jul These images were gathered from all over the internets but it has come to our attention that a few of them can be purchased as shirts from various sites. If you’re looking to find some terrific t-shirts (beyond just what you may see here as well) visit Threadless , Shirt Woot! , Tee Fury and Glennz Tees . Check out Part 1 in this series here and Part 3 here . Stuffed Animals with Mental Disorders German toymaker Paraplush has released a line of cute stuffed animals that suffer from different mental illnesses. Depressed Turtle Being an animal accustomed to a more relaxed pace, life in the fast lane has caught up with Dub, sending him into a severe depression. Sheep with Multiple Personality Disorder Dolly seems to suffer from the delusion that she is a wolf despite the fact that she is without a doubt a sheep.