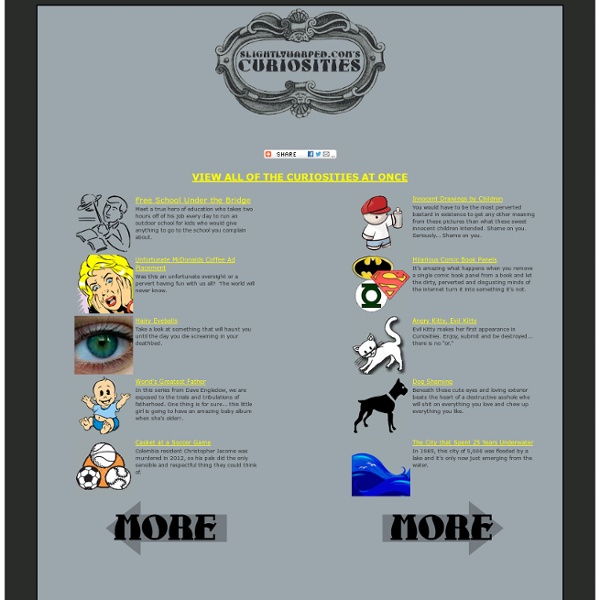 Dark Roasted Blend "QUANTUM SHOT" #531Link - by Avi Abrams Army of tiny robots grows in number and sophistication Since our last "Robot Art" overview came out, these cute little bots multiplied like rabbits or Google spiders, and they all look good, so it's time for an update! (image courtesy Mike Rivamonte) Most of these robot figures (often called "nerdbots") are made from found objects, purely for your esthetic appreciation - and yet one can't shake the feeling that they might one day come to life (as if in some Stephen King story) and invade your cubicle, making shrill R2D2 sounds and mounting attacks on, say, a hated monstrous copy machine in the corner. Mike Rivamonte's metal sculptures are "interpretation of robots and spacemen capable of flight and mischief. The detailing on these robots is exceptional: (images courtesy Mike Rivamonte) Recent updates from Nemo Gould are quite surreal: Nicholas and Angela from "Nerdbots" site build the said "bots" out of scraps of... pretty much anything vintage and cool:

Fresh Baked Bread, Anyone? Gruesome Body Bakery Imagine running up to the bakery around the corner and coming across bread shaped like body parts. Sound yummy? Artist Kittiwat Unarrom creates just that; gruesome works of art out of bread. Kittiwat Unarrom has a master's degree in fine arts and creates bruised and battered heads, feet and other internal organs at a bread shop in Thailand. He started using his skills and made sculptures out of bread. This came naturally to him because his family runs a bakery. This makes me wonder how long the line wraps around the bakery in order to purchase this finely crafted delicious bread. I would love to go over to my parent's house with one of these. I think this could be an excellent idea for restaurants. Sources: amiedotcom, foodmall If this is not strange enough for you, perhaps you can Feast Like A Cannibal at the Human Buffet instead.

Oddity Central - Weird Places, Odd Events, Bizarre News, Strange People and A Lot More All Too Flat : Pranks : Cube We couldn't have been happier! Here are a whole bunch of pictures of the Astor Place Rubik's Cube from many angles: The thing was humongous! At this point it was almost 6am. Many thanks to our peeps who stayed up all night to help us pull this off. The Rubik's Cube stayed up for the entire day. At around 5pm, I was curious if it was still up since I hadn't heard from anyone for a while. It stayed up through evening rush hour, when people seemed waaay more excited about it than they did at 6:30am on their way to work. But then around 8pm a strange thing happen. Oh well. Back to the Astor CubeBack to pranks

Did you know Random Facts but all True Can you imagine free web hosting service that has 99.9% uptime? Too good to be true? No more! 000webhost.com has made the revolution, forget the stereotype that free hosting is unreliable.. Here is the proof: uptime stats of 20 servers. 1500 MB disk space, 100 GB data transfer! Our free hosting service is supercharged with over 60 features, just like paid hosting. Need unlimited premium hosting that is really UNLIMITED? Signup with www.hosting24.com - unlimited disk space, unlimited data transfer, host unlimited domains for just $4.84 1500 MB Disk Space, 100 GB Data Transfer Every account receives 1500MB space and a whopping 100GB bandwidth, made possible by the unmetered connections our servers utilise. PHP with MySQL Database Support Unlike other free webhosts we do support PHP and MySQL with no restrictions. cPanel Control Panel cPanel is the most advanced control panel in industry. Fantastico De Luxe 1-Click Autoinstaller Finally! Website Builder Software