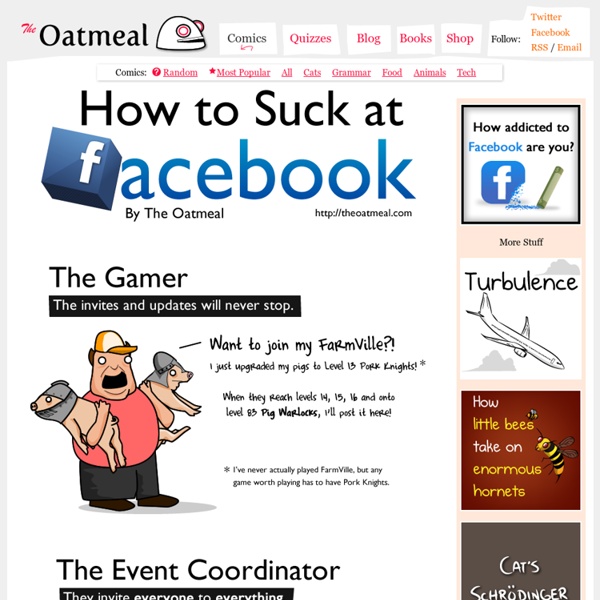 Rise of the Facebook-Killers On a cold Friday evening in February two years ago, with a historic blizzard bearing down on the Eastern Seaboard, a small crowd of people bundled into a New York University lecture hall to hear a talk that would become something of a legend, a shot heard 'round the Internet. The speaker of the evening was Eben Moglen, a professor at Columbia Law School and the founder of the Software Freedom Law Center. A stocky man with a white beard, glasses, and a high, nasal voice, Moglen spoke casually and rocked back and forth on his heels as he turned to make eye contact with his audience. "So, of course, I didn't have any date tonight," Moglen began, deadpan. "Everybody knows that. My calendar's on the Web.

Human bones take part in an artistic project against violence The skeleton bones you see in these pictures are real human bones, believe it or not. Francois Robert purchased some old metal lockers several years ago at an auction, and one of the lockers contained real human bones, so he figured out that he had to use them in some way. The result was to make different shapes that are 6 feet wide by using the bones – a project he called “Stop the Violence” that will make others aware of the violence caused by wars. The shapes are mostly inspired by war and ideologies, and they are everything from guns and bombs to the signs of the different religions. The shapes look really clean and neat because the white bones are in a great contrast to the black background.

Kids Turn White Room into Explosion of Color Jan 7, 2012 The Obliteration Room 2011 revisits the popular interactive children’s project developed by Yayoi Kusama for the Queensland Art Gallery’s ‘APT 2002: Asia Pacific Triennial of Contemporary Art’. In this reworked and enlarged installation, an Australian domestic environment is recreated in the gallery space, complete with locally sourced furniture and ornamentation, all of which has been painted completely white. While this may suggest an everyday topography drained of all colour and specificity, it also functions as a blank canvas to be invigorated — or, in Kusama’s vocabulary, ‘obliterated’ — through the application, to every available surface, of brightly coloured stickers in the shape of dots. As with many of Kusama’s installations, the work is disarmingly simple in its elemental composition; however, it brilliantly exploits the framework of its presentation.

World's Fastest-Growing Facebook App Will Scare the Crap Out of You I became forever terrified upon discovering "Take This Lollipop," an interactive video that launched two weeks before Halloween, yet still continues to haunt millions on the Internet. After giving the application permission to access my information (something my generation often doesn't think twice about), a blue lollipop appears on the screen with a razor in the middle. Slightly concerned, but mostly intrigued, I click the piece of candy. Let's take a tour of the video. As of this morning, "Take This Lollipop" has been liked by 9,976,146 people, making it the fastest-growing Facebook application ever — a result the video's creator never expected.