An Open Letter to White Male Comedians. French Parliament Observes “Cat Call & Wolf Whistle” Tuesdays. Are women now confined to drab, dark pants suits, a slicked back bun and minimal make up to be taken seriously in politics? In France, the answer is unfortunately a resounding yes. Recently, Cecile Duflot, French Housing Minister, who donned a conservative, long-sleeved, knee-length floral summer dress to speak before the assembly, was heckled with whistles and wolf howls.

Duflot addressed the uncalled for sexism at the onset of her speech saying, “Ladies and gentlemen, obviously, more gentlemen than ladies…” Duflot attempted to continue her speech regarding a new metropolitan plan for the Paris region, but leering and shouting overshadowed her political message. The men of the assembly are attempting to excuse their actions by saying the cat-calls were out of admiration.

Conservative MP Patrick Balkany said, "We weren’t heckling or whistling Cecile Duflot, we were admiring her. This should serve as a reminder to all of us to remain vigilant about sexism in the media. The “Context” of Daniel Tosh’s Rape Joke. How Daniel Tosh’s joke and his subsequent apology are part of a much larger problem. by Imran Siddiquee Supporters of Daniel Tosh and his brand of comedy will often use the defense – as the comedian himself did – that comedy provides a context in which we can joke about “awful things” without worrying about the impact these things might have if said elsewhere (these “things” being, in this case, gang-raping women ).

The framework provided by a comedian’s stand-up routine, the theory goes, makes any kind of humor permissible because the performer and the audience have a universal understanding that what is said on stage is not truth, but “comedy.” Or as someone on Facebook put it: “everyone knows there are no sacred cows in comedy.” 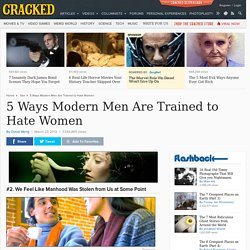 We Feel Like Manhood Was Stolen from Us at Some Point Photos.com You know how every comedy has that stock character of the womanizing, amoral guy who just says what he thinks all the time, and cares only about himself? Joey in Friends, Charlie Sheen in Two and a Half Men, Sterling Archer in Archer, Gob in Arrested Development, Ashton Kutcher's character in That '70s Show, Michael in our Web series, the title character in my books? Guys love that character because he's doing what, on some level, we all wish we could do.

See, every single male can remember the first time, when he was 5 or 6 years old, he showed his penis to a stranger and everybody started freaking the hell out. And, when we get nostalgic for the past, we always dress it up in some ridiculous fantasy like 300, where everybody is shirtless and screaming and hacking things with swords. Photos.com"No, just hold on. And then at some point, women took it all away. #1. Via TV TropesThird panel omitted due to graphic content. 5 Reasons Women Will Rule the Future. Do me a favor. 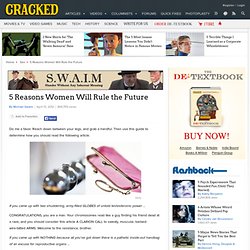 Reach down between your legs, and grab a handful. Then use this guide to determine how you should read the following article. Getty If you came up with two shuddering, army-filled GLOBES of untold testosteronic power ... CONGRATULATIONS, you are a man. If you came up with NOTHING because all you've got down there is a pathetic inside-out handbag of an excuse for reproductive organs ... SORRY, you are a woman. The trends are clear. Fellas ... this is what we're up against. #5. Kate's Playground. Pandagon.net. Dat Ass. Are sex offenders and lads’ mags using the same language? - University of Surrey - Guildford.

Tuesday 6 December 2011 Far from being harmless or ironic fun, lads’ mags could be legitimising hostile sexist attitudes, according to new research. 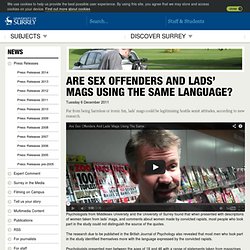 Psychologists from Middlesex University and the University of Surrey found that when presented with descriptions of women taken from lads’ mags, and comments about women made by convicted rapists, most people who took part in the study could not distinguish the source of the quotes. The research due to be published in the British Journal of Psychology also revealed that most men who took part in the study identified themselves more with the language expressed by the convicted rapists. Psychologists presented men between the ages of 18 and 46 with a range of statements taken from magazines and from convicted rapists in the study, and gave the men different information about the source of the quotes.

He added that young men should be given credible sex education and not have to rely on lads’ mags as a source of information as they grow up. Maxim's "Cure A Feminist" Spreads the Sexism Even Farther Than It Dared to Hope. I noticed a friend’s Facebook share the other day of a Maxim “article” along with a critique of the language of “lads mags.” 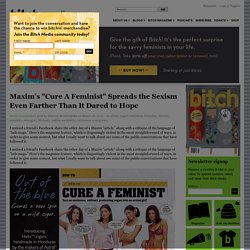