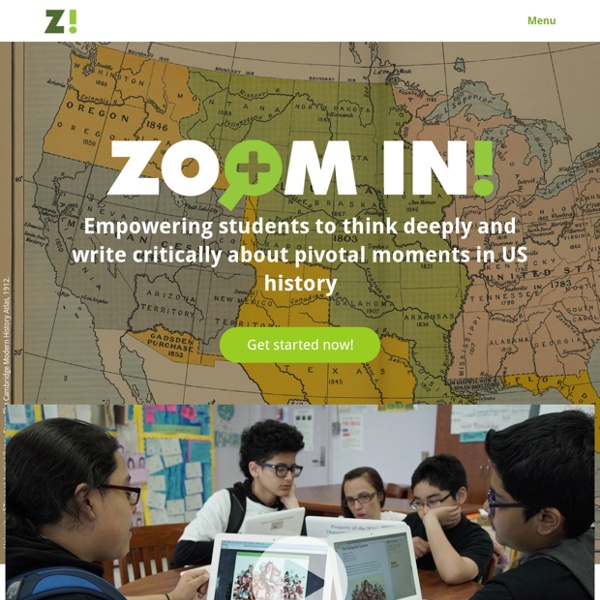 Parable of the Polygons - a playable post on the shape of society This is a story of how harmless choices can make a harmful world. These little cuties are 50% Triangles, 50% Squares, and 100% slightly shapist. But only slightly! In fact, every polygon prefers being in a diverse crowd: You can only move them if they're unhappy with their immediate neighborhood. Once they're OK where they are, you can't move them until they're unhappy with their neighbors again. ​The 10 Best AR Apps for Classrooms Using Apple’s New ARKit The recent popularity of augmented reality (AR) and virtual reality (VR) has put a spotlight on immersive technology—and our curriculum may never look the same again. In the midst of all this enthusiasm, Apple has released a new resource for app developers—the ARKit—that has supercharged augmented reality for fields like entertainment, gaming, advertising and, of course, education. The ARKit is often mistaken as a single app, but it’s actually a tool for developers to create their own apps. Already, it has opened up the AR floodgates for newer Apple devices, and developers have been showcasing their new apps on social media using the hashtag #ARKit.

Trans-Atlantic Slave Trade Roll over names of designated regions on the map above for descriptions of the role of each in the trans-Atlantic slave trade. North America The North American mainland played a relatively minor role in the trans-Atlantic slave trade. Its ports sent out less than five percent of all known voyages, and its slave markets absorbed less than four percent of all slaves carried off from Africa. An intra-American trade in slaves – originating in the Caribbean - supplied additional slaves, however. This region was exceptional in the Americas in that a positive rate of natural population growth began relatively early, thus reducing the dependence of the region on coerced migrants. National Jukebox LOC.gov WARNING: Historical recordings may contain offensive language. Read the disclaimer Now Playing... Elk's reunion march Le parlate d'amor El teléfono a larga distancia At the jazz band ball Everybody's jazzin' it Pack up your troubles in your old kit bag and smile, smile, smile! View This Playlist

The Persistence of Myth: The Causes of the Civil War Although there is little controversy among historians about the centrality of slavery in causing the Civil War, the myth of a “debate” persists. And with President Trump’s recent, historically inaccurate comments about the Civil War, this issue has once again been dragged into the spotlight, galling historians and history teachers. The notion that there is any controversy only serves to advance the ideology of white nationalists and so-called Lost Causers. In promoting this “alternative” view, these groups seek to undermine the role of slavery in secession, in the development of American capitalism and even in the creation of the United States. As historian James W.

Five Tools for Creating Animations on Chromebooks Yesterday's post about the PuppetMaster app prompted a couple of people to ask me if there is anything similar available for Chromebook use. While I can't think of anything that is free and exactly like PuppetMaster, here are some options for creating animated videos on Chromebooks. Animatron is a nice tool for creating animated videos and images.

PBS Election The Contenders - 16 for '16 PBS, in partnership with OZY Media, is proud to present The Contenders-16 for '16, a documentary series that examines the most compelling and influential presidential campaigns in modern history. From Jesse Jackson’s groundbreaking 1984 and 1988 campaigns to Barry Goldwater’s 1964 launching of a brand of conservatism that influenced both Republican Ronald Reagan and even Democratic Hillary Clinton. Educators Foster your students' learning and your own in workshops and events and with online, print, and other resources. K–12 Educator Programs The Museum offers a variety of programs designed for K–12 educators that explore objects in The Met collection, interdisciplinary curriculum integration, and methods for teaching with objects. School Groups Teachers and their students may explore The Met collection either with a Museum guide. Use this quick guide to helpful online Met resources.

a Program of the National Park Service NEW! Arthurdale: A New Deal Community Experiment Explore Arthurdale, West Virginia, and discover a town founded during the Great Depression when First Lady Eleanor Roosevelt championed subsistence homestead communities for struggling Americans across the country. In this lesson, learn about the impoverished Appalachian mining town that Arthurdale's homesteaders left and the Progressive-era theories about communal work, school, and rural life they tested at their new home. Crash! Bang! Boom! How to add Google Drawings comic strips to your class This post is co-authored by Ditch That Textbook’s Matt Miller and Cori Orlando, a teacher on special assignment (TOSA) from Simi Valley, California. Find her blog, Leading in Limbo, at leadinginlimbo.weebly.com. We (Cori and Matt) are betting that comics are a memorable part of your childhood, whether they were the color comic strips in the Sunday newspaper or comic books. Comic strips and comic strips captivated us as children. Tap into that energy in the classroom with Google Drawings comic strips!

The Learning Power of Lesson Cliffhangers and Connectors A MiddleWeb Blog I started saying it because it amused me: Stay tuned for tomorrow’s episode in which we will look at the part of the Declaration of Independence that Thomas Jefferson cut out because it was so controversial… Or… Now that the United States has acquired the Philippines, Puerto Rico and Guam, tomorrow we will look at the key piece of the puzzle that will connect America’s new empire… Then I began to notice students talking to each other after the bell rang about what we had done in class and what might be next. K12 Open Ed - ebooks This work by K12 Handhelds is licensed under a Creative Commons Attribution 3.0 Unported License. Fiction Title: Angry KingDownloads: Kindle Title: Bald BobDownloads: Kindle Title: Bedbug TadDownloads: Kindle

Making of America aking of America (MoA) is a digital library of primary sources in American social history from the antebellum period through reconstruction. The collection is particularly strong in the subject areas of education, psychology, American history, sociology, religion, and science and technology. The collection currently contains approximately 10,000 books and 50,000 journal articles with 19th century imprints. For more details about the project, see About MoA. Making of America is made possible by a grant from the Andrew W.