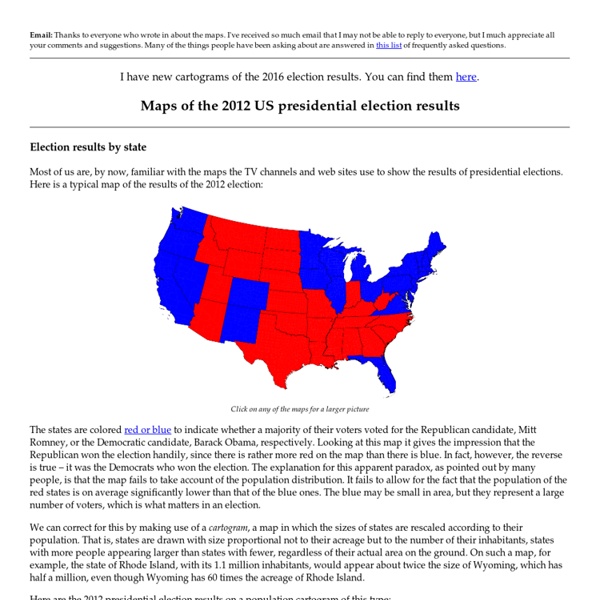 Email: Thanks to everyone who wrote in about the maps. I've received so much email that I may not be able to reply to everyone, but I much appreciate all your comments and suggestions. Many of the things people have been asking about are answered in this list of frequently asked questions. I have new cartograms of the 2016 election results. You can find them here. Election results by state Most of us are, by now, familiar with the maps the TV channels and web sites use to show the results of presidential elections. Click on any of the maps for a larger picture The states are colored red or blue to indicate whether a majority of their voters voted for the Republican candidate, Mitt Romney, or the Democratic candidate, Barack Obama, respectively. We can correct for this by making use of a cartogram, a map in which the sizes of states are rescaled according to their population. Here are the 2012 presidential election results on a population cartogram of this type: Election results by county

The Tarnish of the Electoral College Now the demographic pendulum is swinging toward the Democrats. Young voters, Hispanics and a more active African-American electorate added states like Nevada, New Mexico, Colorado and Virginia to President Obama’s winning coalition in the past two elections, and suddenly Republicans are the ones complaining about a broken system. They’re right, too, just as the Democrats were a generation ago. The Electoral College remains a deeply defective political mechanism no matter whom it benefits, and it needs to be abolished. We say that in full knowledge that the college may be tilting toward the kinds of candidates we tend to support and provided a far more decisive margin for Mr. Obama earlier this month than his showing in the popular vote. There should be no structural bias in the presidential election system, even if population swings might oscillate over a long period of decades. But 76 years later, the system continues to calcify American politics.

How I Was Able to Ace Exams Without Studying Editor’s note: This is a guest post from Scott Young of ScottYoung.com. In high school, I rarely studied. Despite that, I graduated second in my class. In university, I generally studied less than an hour or two before major exams. However, over four years, my GPA always sat between an A and an A+. Recently I had to write a law exam worth 100% of my final grade. Right now, I’m guessing most of you think I’m just an arrogant jerk. Why do Some People Learn Quickly? The fact is most of my feats are relatively mundane. The story isn’t about how great I am (I’m certainly not) or even about the fantastic accomplishments of other learners. It’s this different strategy, not just blind luck and arrogance, that separates rapid learners from those who struggle. Most sources say that the difference in IQ scores across a group is roughly half genes and half environment. Rote memorization is based on the theory that if you look at information enough times it will magically be stored inside your head. 1.

Electoral Maps 1972-2008 The 2012 US Presidential Election The electoral map shown below depicts the results of the 2012 U.S. presidential election in which Barack Obama defeated Mitt Romney. Obama carried 26 states and 51.1% of the popular vote. Democrat: 332 Barack Obama Republican: 206 Mitt Romney How to Change Your Life: A User’s Guide ‘You will never change your life until you change something you do daily.’ ~Mike Murdock By Leo Babauta Start with a simple statement: what do you want to be? Are you hoping to someday be a writer, a musician, a designer, a programmer, a polyglot, a carpenter, a manga artist, an entrepreneur, an expert at something? How do you get there? Do you set yourself a big goal to complete by the end of the year, or in three months? I’m going to lay down the law here, based on many many experiments I’ve done in the last 7 years: nothing will change unless you make a daily change. I’ve tried weekly action steps, things that I do every other day, big bold monthly goals, lots of other permutations. If you’re not willing to make it a daily change, you don’t really want to change your life in this way. So make a daily change. How to Turn an Aspiration Into a Daily Change Let’s name a few aspirations: How do you turn those lofty ideas into daily changes? You get the idea. How to Implement Daily Changes

The Electoral College: Enlightened Democracy The mode of appointment of the Chief Magistrate of the United States is almost the only part of the system . . . which has escaped without severe censure. . . . I venture somewhat further, and hesitate not to affirm that if the manner of it be not perfect, it is at least excellent. -- Alexander Hamilton The United States is quickly approaching its first presidential election since the eventful election of 2000. Some academics have criticized the Electoral College for years. The negative views of today's academics are starkly at odds with the universal admiration for the system at the time it was created. The Constitution's Election Process Modern-day American presidential elections are governed by the 12th Amendment to the U.S. It is perhaps easiest to think of the current election procedure in two phases: first, the Electoral College vote, and second, the contingent election procedure, which is used only if no candidate wins a majority of electoral votes. The Electoral College Vote.

'The End of the Whole Mess' | Monkey Kingdom by Stephen KingStephen King needs no introduction. He is the award-winning, best-selling author of novels such as Carrie and the post-apocalyptic masterpiece The Stand. Although he is most well-known for his novels and the movies they’ve inspired, he is a prolific author of short fiction as well, having written enough of it to warrant several collections including: Everything’s Eventual, Night Shift, Skeleton Crew, and Nightmares & Dreamscapes. “The End of the Whole Mess,” appeared in the latter volume, but was originally published in Omni magazine in 1986. It was nominated for the World Fantasy Award, and was recently adapted into a one-hour movie as part of a TNT Nightmares & Dreamscapes miniseries. There are several factors that go into deciding which story to lead off an anthology with. In any event, I think maybe I’d better assume the worst and go as fast as I can. Shit, I can’t afford these digressions. And I’ve sure-to-God got one now. Mom graduated magna cum laude from Drew.

Electoral College tie possible in Obama-Romney race The likelihood that Obama and Romney each net 269 electoral votes is not so far-fetchedA CNN analysis finds eight scenarios that could yield a Electoral College tieIn the event of a tie, each state's House delegation casts a single vote for presidentIn 1825, the House awarded the presidency to John Quincy Adams Washington (CNN) -- An Electoral College tie. It's the white whale of American elections: elusive, mythical and never realized. The likelihood that President Barack Obama and Mitt Romney will each net 269 electoral votes in November, instead of the 270 needed to win, is actually not so farfetched -- and for close observers of the Electoral College system, a tie would set off a wave of constitutional and political mayhem that would make the 2000 Florida recount seem like a tidy affair. Check out the CNN electoral map and calculator Election results in key states would immediately be subject to legal challenges. Swing states could decide U.S. election Alex Castellanos' electoral map

166 Documentaries To Expand Your Consciousness By: Higher Perspective Here is a list of over 100 documentaries you can watch for free online. They are about Science, Consciousness, ETs, you name it. It’s a smorgasbord of fascinating subjects to learn about. If you find a dead link please let us know and we will find another to replace it. 1. The Republican Party’s uphill path to 270 electoral votes in 2016 elections Over the past three decades, the political leanings of many states have shifted dramatically. What once was a sizable Republican advantage in the electoral college has become a decided Democratic advantage. One way to look at this is by comparing two overlapping 20-year periods. The first period was the era of Republican dominance — the start of the Reagan era. Republicans won 16 states in each of the six elections during that period and won an additional four states in five of the six. From 1980-2000, 10 states were up for grabs, with each party winning them three times over six elections. From 1992-2012, Democrats built a base that rivals or exceeds that of the Republicans in the earlier period. Meanwhile, Republicans won 13 states in those six elections, but because most of them were smaller states, their electoral votes totaled just 102. What happened? All 16 states that went for the GOP in the past six elections remain solidly in the Republican column.

National Popular Vote: New York State Climbs Aboard On Tuesday, the State of New York took a baby step—or maybe a giant leap!—toward making the United States of America something more closely resembling a modern democracy: Governor Andrew Cuomo signed a bill joining up the Empire State to the National Popular Vote (N.P.V.) interstate compact. As I’ve explained many times (fifty-one, to be exact), N.P.V. is a way to elect our Presidents the way we elect our governors, our mayors, our senators and representatives, our state legislators, and everybody else: by totting up the voters’ votes—all of them—and awarding the job to whichever candidate gets the largest number. Impossible, you say? Here’s how it works: Suppose you could get a bunch of states to pledge that once there are enough of them to possess at least two hundred and seventy electoral votes—a majority of the Electoral College—they will thenceforth cast all their electoral votes for whatever candidate gets the most popular votes in the entire country. Next stop: Connecticut.

The Pixar Theory Every Pixar movie is connected. I explain how, and possibly why. Several months ago, I watched a fun-filled video on Cracked.com that introduced the idea (at least to me) that all of the Pixar movies actually exist within the same universe. Since then, I’ve obsessed over this concept, working to complete what I call “The Pixar Theory,” a working narrative that ties all of the Pixar movies into one cohesive timeline with a main theme. This theory covers every Pixar production since Toy Story. A Bug’s LifeToy Story 2Monsters Inc.Finding NemoThe IncrediblesCarsRatatouilleWall-EUpToy Story 3Cars 2BraveMonsters University The point of this theory is to have fun and exercise your imagination while simultaneously finding interesting connections between these fantastic movies. [SIDE NOTE: All text in blue indicates updated edits since the original version] You can read the full theory below, or watch this summarized video that was made and narrated by Bloop Media. Lines are being crossed. Mr.