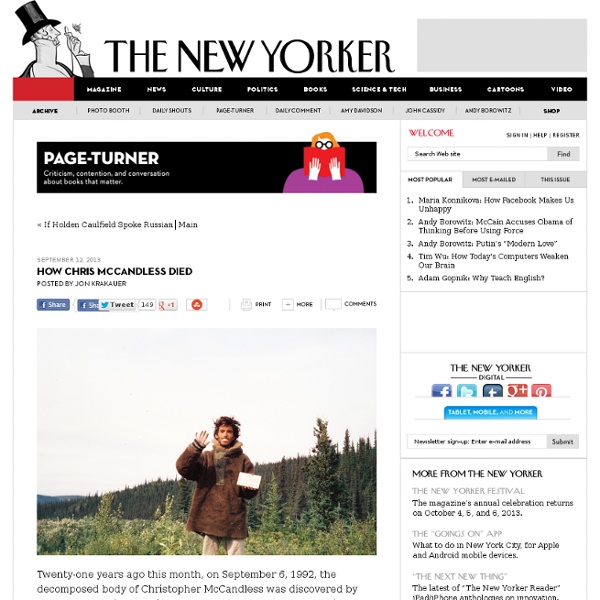 Twenty-one years ago this month, on September 6, 1992, the decomposed body of Christopher McCandless was discovered by moose hunters just outside the northern boundary of Denali National Park. He had died inside a rusting bus that served as a makeshift shelter for trappers, dog mushers, and other backcountry visitors. Taped to the door was a note scrawled on a page torn from a novel by Nikolai Gogol: From a cryptic diary found among his possessions, it appeared that McCandless had been dead for nineteen days. A driver’s license issued eight months before he perished indicated that he was twenty-four years old and weighed a hundred and forty pounds. After his body was flown out of the wilderness, an autopsy determined that it weighed sixty-seven pounds and lacked discernible subcutaneous fat. In “Into the Wild,” the book I wrote about McCandless’s brief, confounding life, I came to a different conclusion. “Into the Wild” is a misrepresentation, a sham, a fraud. I was perplexed.

Emerson-Thoreau Correspondence The Emerson-ThoreauCorrespondence: The Dial Period By F.B. Sanborn The Atlantic Monthly, May 1892 Note: These letters of Emerson and Thoreau are all from 1843. Sanborn's article was published almost 50 years after they were written. The American Novel . Six Novel Ideas . American Dreams by James Nagel The American dream is a mythic structure underlying the founding of the colonies in America and the literature that emerged in the New World. In a sense, the concept has its origins in an essay written by John Winthrop aboard the ARBELLA in 1630. Soon to be governor of the Massachusetts Bay Colony, Winthrop was pondering the nature of life in a new society, one filled with opportunity for social and financial advancement but one in which ambition had to be tempered with charity and decency, especially with regard to the poor. What his people needed, he argued, was the freedom to make the most of their lives based on the development of essential inner qualities, justice and mercy chief among them.

Rikki-tikki-tavi At the hole where he went in Red-Eye called to Wrinkle-Skin. Hear what little Red-Eye saith: ``Nag, come up and dance with death!'' Eye to eye and head to head, (Keep the measure, Nag.) This shall end when one is dead; (At thy pleasure, Nag.) Turn for turn and twist for twist- (Run and hide thee, Nag.) Hah! The best in Boston food, music, and entertainment oston Building Resources is the nation’s only building materials co-op, owned by and operated for its members, which means you can find great deals (once you find this place) on kitchen cabinetry (including design services), windows, doors, and environmentally friendly products like rain barrels, recycled paint, home compost bins, and weather stripping. There are also workshops on DIY skills such as tiling, painting, and window or screen repair (above), and bargains on great one-of-a-kind and often retro or antique donated used materials including cabinet sets, appliances, windows, doors, sinks, and flooring. Another secret: You don’t have to be a member to shop here, though you get bigger discounts if you are. Thanks to a state subsidy, you can buy a compost bin at Boston Building Resources for around 50 bucks, half the retail price.

VISITING THOREAU & FINLAY ~ Henry David Thoreau's hut site, October 1, 2014 Long ago, but not really long ago (40 years — and in those 40 years Earth has lost half of its wildlife) one could drive Route 2 along the top edge of the Massachusetts plain and pretty much have a countryside drive until one reached Concord, home of Henry David Thoreau. Walden Pond, October 1, 2014 When hiking around Walden Pond my hiking partner will ask whose land it was that Thoreau built his hut upon, and I'll say Emerson, while steering at our hike on the sandy beach around the emerald pond.

Jon Stewart and The American Dream Will getting an education help you achieve the American dream? College graduates still earn twice what their peers with only a high school diploma earn, but if you don't have the educational and social opportunities you need to actually get into college and graduate, your chances of raking in a higher salary are pretty slim. Indeed, in an appearance this week on The Daily Show to promote his new book The Price of Inequality, Nobel Prize-winning economist Joseph Stiglitz told Jon Stewart that the life chances of "a young person born in the United States" are "more dependent on the income and education of his parents" than in any other other advanced country in the world. Stiglitz says the inequality of opportunity we're facing now is worse than it was in Old Europe, which means the American Dream has become a myth.

Small Beer Press by Ray Vukcevich Sun 1 Jul 2001 - Filed under: Free Stuff to Read, Short Stories | 18 Comments And then she fired her parting shot. New England White Water Rafting - Zoar Outdoor In 1989, Zoar Outdoor pioneered the original white water rafting trips on the Deerfield River in Massachusetts and since then, we have expanded our New England rafting trips to the West River in Vermont and the Millers River and the Concord River in Massachusetts. A Zoar Outdoor adventure is the perfect vacation or active getaway in New England for your friends and family. Our professional whitewater rafting guides have years of experience guiding beginners to experts down mellow floats to Class IV thrillers. Our highly trained guides, excellent safety record and state-of-the-art rafting equipment give you the security of knowing you are in expert hands on a Zoar Outdoor adventure. Our friendly, professional staff, delicious homemade meals and convenient lodging facilities help create a memorable whitewater rafting adventure for you and your friends or family.

Intro to American Romanticism American Romanticism (or the American Renaissance) Ann Woodlief's Introduction For many years, this period and these writers were known as the American Renaissance, a coin termed by F.O. Matthiessen in his book of that name in 1941. This book set the parameters of how to read and connect these writers until relatively recently, when its limitations, especially in terms of defining the "canon" of literary giants and what made them (all male) "giants" have been recognized and challenged. However, the term is still useful to some degree. It is a misnomer, if one thinks of the period as a time of rebirth of some earlier literary greatness, as the European Renaissance, because there was nothing to be "reborn."

Chris Rock’s economic bombshell: What his “riots in the streets” prediction says about the American Dream I’ve already written a bit about Chris Rock’s must-read interview with Frank Rich and, as much as I enjoy the comedian’s work, I didn’t expect to be returning to it quite so soon. But although Rock’s comments on racism initially drew the most attention, a recent study from Gregory Clark, a researcher at University of California, Davis, has got me thinking that the comedian’s most insightful (and potentially radical) statement came earlier in the interview, during a brief digression about inequality. “Oh, people don’t even know,” he said, responding to Rich’s claim that class was still “the elephant in the room” of American politics. “If poor people knew how rich rich people are,” he continued, “there would be riots in the streets.” At first blush, this may not sound like such a profound statement; it could be easily mistaken for a comment about the politics of envy or simply the awesome scale of inequality today.

The longest joke in the world. A man in the desert. So, there’s a man crawling through the desert. He’d decided to try his SUV in a little bit of cross-country travel, had great fun zooming over the badlands and through the sand, got lost, hit a big rock, and then he couldn’t get it started again. There were no cell phone towers anywhere near, so his cell phone was useless. He had no family, his parents had died a few years before in an auto accident, and his few friends had no idea he was out here. He stayed with the car for a day or so, but his one bottle of water ran out and he was getting thirsty. He thought maybe he knew the direction back, now that he’d paid attention to the sun and thought he’d figured out which way was north, so he decided to start walking.

American Renaissance & Romanticism American Renaissance & American Romanticism “Transcendentalism” is a loose, baggy word that can have different meanings in different contexts. intellectually, Transcendentalism is a form of mystic thought rooted in Western traditions like Neo-Platonism or Swedenborgianism. Its elevated, penetrating perspective resolves the many conflicting phenomena of the material world to a spiritual direction or meaning.