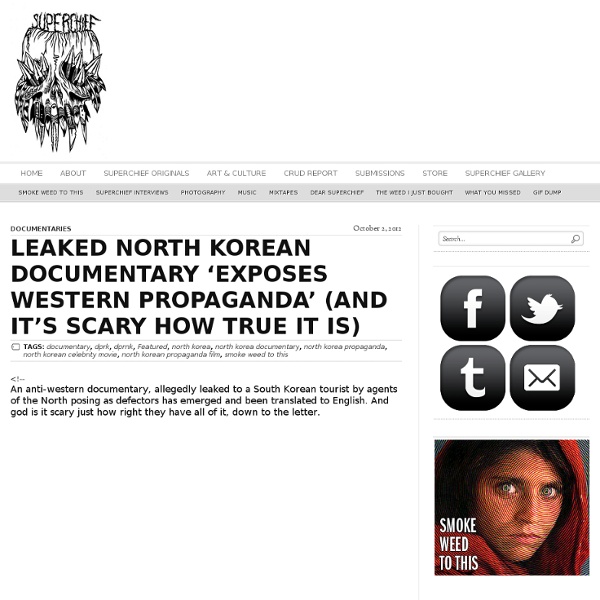 Sabine is a YouTube user who, during a visit to family living in South Korea in April of this year, was given a DVD by a man and a woman claiming to be North Korean “defectors”, and was asked to translate the film so it could be posted on the internet and reach a wider audience. What the DVD turned out to be was something much more than Sabine, or anyone else, probably would’ve imagined, and something that certainly has found a widespread audience on the internet over the last month or so – it was a film called “PROPAGANDA”, a documentary about capitalism, imperialism, mass manipulation of western culture for the purpose of commodification, and how it permeates every aspect of the lives of blissfully ignorant, borderline zombie masses. And jesus, is it on the fucking money. From the video’s description - North Korea in the 1980s The movie opens: “This is a film about psychological warfare. And in the real world, in case you haven’t realized, everything is propaganda. Table of Contents:

31 Quotes That Will Give You Chills - Ars Spiritus I think quotes have a powerful way of conveying an attitude to you which sometimes resonates so much that you feel ‘chills’ inside. Here’s a list of the quotes which have given me the most of these “chills”. Enjoy! Some people die at 25 and aren’t buried until 75. —Benjamin FranklinMost people are other people.

Logic Puzzles Bulbs This is one of my favorite free printable logic puzzles with a real life solution. There are three switches downstairs. Keep the first bulb switched on for a few minutes. A Ping-Pong Ball in a Hole Your last good ping-pong ball fell down into a narrow metal pipe imbedded in concrete one foot deep. All the tools are random things that are not going to help you. A Man in an Elevator A man who lives on the tenth floor takes the elevator down to the first floor every morning and goes to work. The man is of short stature. The Ball How can you throw a ball as hard as you can and have it come back to you, even if it doesn't bounce off anything? Throw the ball straight up in the air. The Magnet This logic puzzle was published in Martin Gardner's column in the Scientific American. You can hang the iron rods on a string and watch which one turns to the north (or hang just one rod). Virile Microbes A Petri dish hosts a healthy colony of bacteria. The dish will be full at 12:44. Philosopher's Clock

How To Mix Chalkboard Paint in Any Color We love using chalkboards as backdrops for displays and parties (like this one here!). So we were super excited to learn that you can create your own custom colors-and it's really easy! We first learned how from Martha Stewart whose tutorial you can read here. Supplies: 1/2 cup acrylic paint (choose any color you like, or mix colors together to make the perfect shade!) 1. 2. Once your chalkboard has fully dried be sure to slate the surface before using it for the first time. Have fun creating any color combination you like!!