A Brief Overview of the American Civil War 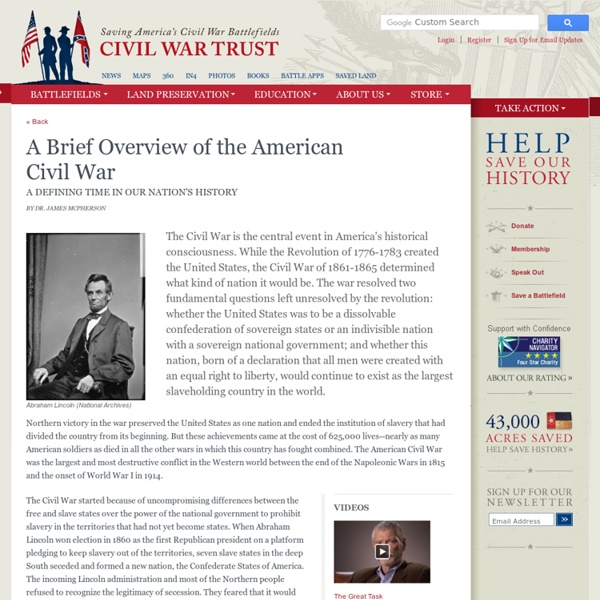 Abraham Lincoln (National Archives) The Civil War is the central event in America's historical consciousness. While the Revolution of 1776-1783 created the United States, the Civil War of 1861-1865 determined what kind of nation it would be. The war resolved two fundamental questions left unresolved by the revolution: whether the United States was to be a dissolvable confederation of sovereign states or an indivisible nation with a sovereign national government; and whether this nation, born of a declaration that all men were created with an equal right to liberty, would continue to exist as the largest slaveholding country in the world. Northern victory in the war preserved the United States as one nation and ended the institution of slavery that had divided the country from its beginning. But these achievements came at the cost of 625,000 lives--nearly as many American soldiers as died in all the other wars in which this country has fought combined.

American Civil War History - American Civil War Lincoln had used the occasion of the Union victory at Antietam to issue a preliminary Emancipation Proclamation, which freed all slaves in the rebellious states after January 1, 1863. He justified his decision as a wartime measure, and did not go so far as to free the slaves in the border states loyal to the Union. Still, the Emancipation Proclamation deprived the Confederacy of the bulk of its labor forces and put international public opinion strongly on the Union side.