Beyond the Bubble: Assessing 21st-century Skills with LOC documents 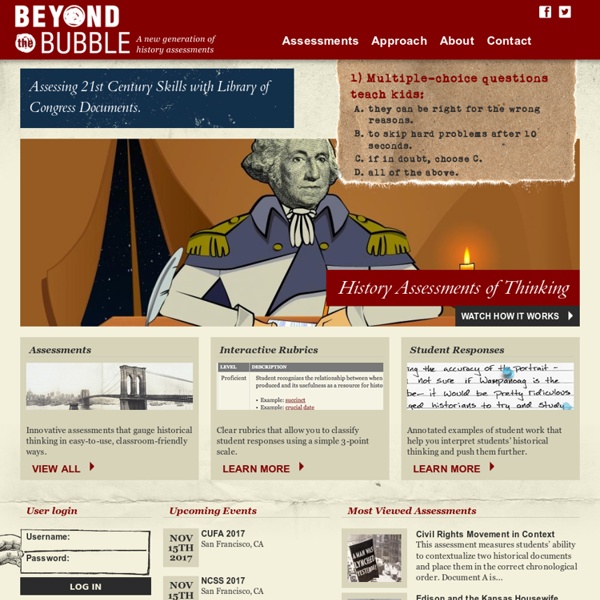 Reading Like A Historian The Reading Like a Historian curriculum engages students in historical inquiry. Each lesson revolves around a central historical question and features sets of primary documents designed for groups of students with diverse reading skills and abilities. This curriculum teaches students how to investigate historical questions by employing reading strategies such as sourcing, contextualizing, corroborating, and close reading. Instead of memorizing historical facts, students evaluate the trustworthiness of multiple perspectives on historical issues.

Trans-Atlantic Slave Trade Roll over names of designated regions on the map above for descriptions of the role of each in the trans-Atlantic slave trade. North America The North American mainland played a relatively minor role in the trans-Atlantic slave trade. Its ports sent out less than five percent of all known voyages, and its slave markets absorbed less than four percent of all slaves carried off from Africa. Immigration: Stories of Yesterday and Today and Ellis Island World War II and the Postwar Period The United States entered World War II in 1942. During the war, immigration decreased. There was fighting in Europe, transportation was interrupted, and the American consulates weren't open. Fewer than 10 percent of the immigration quotas from Europe were used from 1942 to 1945.In many ways, the country was still fearful of the influence of foreign-born people.

National Archives: Teaching With Documents When we ask students to work with and learn from primary sources, we transform them into historians. Rather than passively receiving information from a teacher or textbook, students engage in the activities of historians — making sense of the stories, events and ideas of the past through document analysis. Document Analysis Document analysis is the first step in working with primary sources. PBS Election The Contenders - 16 for '16 PBS, in partnership with OZY Media, is proud to present The Contenders-16 for '16, a documentary series that examines the most compelling and influential presidential campaigns in modern history. From Jesse Jackson’s groundbreaking 1984 and 1988 campaigns to Barry Goldwater’s 1964 launching of a brand of conservatism that influenced both Republican Ronald Reagan and even Democratic Hillary Clinton. The Contenders covers sixteen stories from the past 50 years of presidential election history. The series shows how previous elections are still influencing today in unexpected ways.

VocalNationalAnthems Jana Gana Mana (Bengali: জন গণ মন, Jôno Gôno Mono) is the national anthem of India. Written in highly Sanskritized Bengali, it is the first of five stanzas of a Brahmo hymn composed and scored by Nobel laureate Rabindranath Tagore. It was first sung at the Calcutta Session of the Indian National Congress on 27 December 1911. Jana Gana Mana was officially adopted by the Constituent Assembly as the Indian national anthem on January 24, 1950. An earlier poem by Tagore (Amar Shonar Bangla) was later selected as the national anthem of Bangladesh. Geography Awareness Week 2017: The Geography of Civil Rights Movements This week, Geography Awareness Week celebrates 30 years of geo goodness. Established in 1987, the week is designed to promote geography and highlight the relevance of a geographic education in preparing citizens to understand and debate pressing social and environmental issues and problems. This year’s theme focuses on the Geography of Civil Rights Movements. A recent American Association of Geographers press release suggests that a “civil rights-themed Geography Awareness Week can be an important moment, especially during these turbulent political times, to come to terms with the nation’s unreconciled legacies of oppression and domination.” The AAG goes on:

Class Tech Tips: 5 Totally Free Teacher Tools from the Library of Congress The Library of Congress is a fantastic resource for teachers and students. Their web-based collections, interactive ebooks, and mobile apps are perfect for classrooms studying United States history. Students can swipe through the ebooks on their tablets, access fables on their smartphone or examine primary source documents hosted on the web. Finding resources online can be tough but these free resources from the Library of Congress can connect students to people of the past. All About Explorers Henry Hudson According to detailed records recently discovered in the archives of the Cork County Records Office in Ireland, Henry Hudson was born in room 441 of the Blarney Medical Center at 3:17 PM on Monday, August 13, 1593. He was a very well-educated man who attended the famous Harvard University.