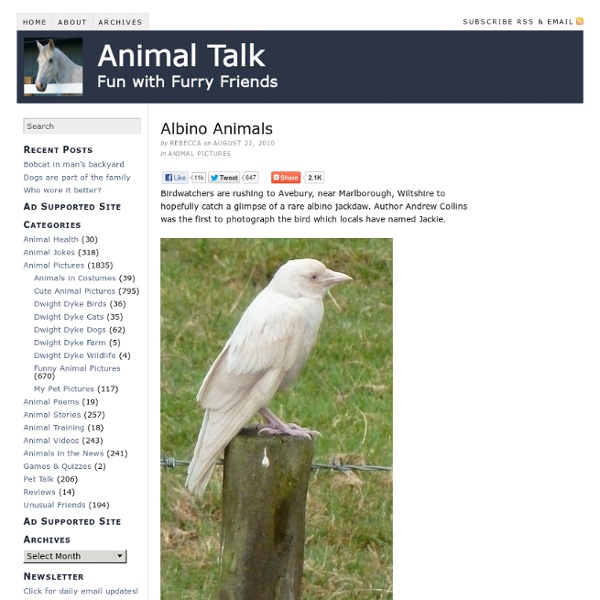 Birdwatchers are rushing to Avebury, near Marlborough, Wiltshire to hopefully catch a glimpse of a rare albino jackdaw. Author Andrew Collins was the first to photograph the bird which locals have named Jackie. Other fabulous albino animals include: According to Wikipedia there is no reported case of a true “albino” horse even though white horses have been referred to as albino in literature and some registries. All so-called “albino” horses have pigmented eyes, usually brown or blue, and thus are not true albinos. Dominant white in horses is caused by the absence of pigment cells melanocytes, whereas albino animals have a normal distribution of melanocytes In other animals, patches of unpigmented skin, hair, or eyes due to the lack of pigment cells (melanocytes) are called piebaldism, not albinism nor partial albinism. Despite this, some registries still refer to “albino” horses.

best animal photobombs ever... Photobomb - (verb) to drop into a photo unexpectedly. An otherwise normal photo that has been ruined or spoiled by someone who was not supposed to be in the photograph. hahaha! so THAT’S why I love cats!! via www.buzzfeed.com Like this: Like Loading... Filed under animals, art, family, funny happenings, life Tagged as animals, camera, cats, dogs, funny, horses, Kodak moments, pets, photobomb, Photograph, photography, pictures

The Russian Blue cat The Russian Blue is a shorthair cat. It doesn't need grooming, but it often enjoys being brushed and combed - because it has a pleasant time. The structure of the coat is something between plush and silk. It must not be too flat lying or long, but it must neither seem wooly. The colour of the coat is blue - this is blue-grey, and a medium blue colour is preferred. It is a great pleasure to show a Russian Blue that has a perfect coat, because many judges value this very much. Ethereal Macro Photos of Snowflakes in the Moments Before They Disappear Russian photographer Andrew Osokin is a master of winter macro photography. His photo collection is chock full of gorgeous super-close-up photographs of insects, flowers, snow, and frost. Among his most impressive shots are photographs of individual snowflakes that have fallen upon the ground and are in the process of melting away. The shots are so detailed and so perfectly framed that you might suspect them of being computer-generated fabrications. You can enjoy many more of Osokin’s impressive photographs (16 pages worth, at the moment) over on his LensArt.ru website. Andrew Osokin Photography [LensArt via The Curious Brain via Colossal] Image credits: Photographs by Andrew Osokin and used with permission

cute Russian Blue The Russian Blue is a cat breed that has a silver-blue coat. They are very intelligent and playful, but tend to be shy around strangers. They develop close bonds with their human companions and are sought out as pets due to their personalities and coat. Some Russian Blues have a small puff of fur above both of their eyes that slant slightly down to give the appearance that Russian Blues look grouchy. Origin[edit] The Russian Blue is a naturally occurring breed that may have originated in the port of Arkhangelsk, Russia.[1] They are also sometimes called Archangel Blues.[2] It is believed that sailors took Russian Blues from the Archangel Isles to England and Northern Europe in the 1860s.[1] The first recorded appearance outside of Russia was in 1875 at the Crystal Palace in England, as the Archangel Cat. Russian Blues are short-haired, blue-gray cats. Physical characteristics[edit] Four month old Russian Blue male Behavioral characteristics[edit] Russian blue's green eyes Allergies[edit]

Wonderland by Kirsty Mitchell: heart-breakingly beautiful photographic series in memory of an extraordinary life Kirsty Mitchell's Wonderland series has been three years in the makingAll costumes, wigs and sets were constructed on a shoestring budgetSome images took up to five months to createShe would often wait an entire year to find the perfect natural setting for her shots By Stephanie Hirschmiller Published: 14:11 GMT, 17 May 2012 | Updated: 09:34 GMT, 18 May 2012 Kirsty Mitchell's late mother Maureen was an English teacher who spent her life inspiring generations of children with imaginative stories and plays. Following Maureen's death from a brain tumour in 2008, Kirsty channelled her grief into her passion for photography. She retreated behind the lens of her camera and created Wonderland, an ethereal fantasy world. 'Real life became a difficult place to deal with, and I found myself retreating further into an alternative existence through the portal of my camera,' said the artist. The resulting images looked so hyper-real that it was assumed that they were created in Photoshop.

mau Tamaskan Dog The Tamaskan Dog is a crossbred dog of sleddog type, originating from Finland, and as of 27 November 2013, has been recognized by the American Rare Breed Association, and the Kennel Club of the United States of America, two related dog fancier and pedigree registries.[1][2] It is a highly versatile dog that can excel in agility, obedience and working trials. It is also capable of pulling sleds, which is inherited from its Siberian Husky and Alaskan Malamute ancestors. Morphologically, Tamaskans have been bred to look like wolves and have a notable lupine appearance. Although there are a little over 400 registered Tamaskan Dogs worldwide, increasing interest has resulted in their spread throughout continental Europe, the UK and the USA, as well as Canada and Australia. Description[edit] A Tamaskan puppy Tamaskans are large, athletic dogs; slightly taller in size than German Shepherds. Temperament[edit] Two off-leash Tamaskan dogs Health[edit] An adult female History[edit] A Tamaskan

African Leopard The African Leopard (Panthera pardus pardus) is a leopard subspecies occurring across most of sub-Saharan Africa. In 2008, the IUCN classified leopards as Near Threatened, stating that they may soon qualify for the Vulnerable status due to habitat loss and fragmentation. They are becoming increasingly rare outside protected areas. Characteristics and geographical variation[edit] Dark-coloured leopard skin from Central Africa (Kongo) African leopards exhibit great variation in coat color, depending on location and habitat. Between 1996 and 2000, 11 adult leopards were radio-collared on Namibian farmlands. Leopards inhabiting the mountains of the Cape Provinces appear physically different from leopards further north. Distribution and habitat[edit] Leopard with kill in tree in Limpopo, South Africa African leopards used to occur in most of sub-Saharan Africa, occupying both rainforest and arid desert habitats. Ecology and behavior[edit] Threats[edit] Conservation[edit] Taxonomy[edit]

African Leopards African leopards are probably the most common of the leopard subspecies that has a minimal conservation concern. Habitat They are widely seen in Africa particularly in the mountainous forests, grasslands, and even the savannahs with the exception of the extreme sandy deserts. Physical Characteristics The physical characteristic of leopards may vary depending on its habitat or location. They are covered with black rosettes with no spots where the pattern is unique in every individual. Those found in the East Africa have a more circular spot, while in Southern Africa, African leopards have square spots. They prefer to live in solitude, and it is very unlikely that they would be seen in groups. a Leopard in Kruger National Park, S.A. Hunting for Survival This animal has strong survival skills, which is why their diet and prey by African leopards may vary. They can eat rodents, insects, reptiles, mammals, and if the food is scarce, they can also take in domestic livestock. Leopard Cubs

African Lions, African Lion Pictures, African Lion Facts, African Cats Lions are the only cats that live in groups, which are called prides. Prides are family units that may include up to three males, a dozen or so females, and their young. All of a pride's lionesses are related, and female cubs typically stay with the group as they age. Young males eventually leave and establish their own prides by taking over a group headed by another male. Only male lions boast manes, the impressive fringe of long hair that encircles their heads. Males defend the pride's territory, which may include some 100 square miles (259 square kilometers) of grasslands, scrub, or open woodlands. Female lions are the pride's primary hunters. After the hunt, the group effort often degenerates to squabbling over the sharing of the kill, with cubs at the bottom of the pecking order. Lions have been celebrated throughout history for their courage and strength.