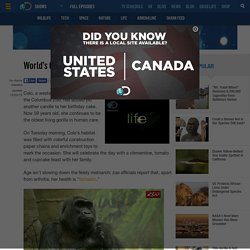 "It's not yet the big 6-0, but it's the big 5-9! Because she is so old, every single day with her, not just her birthday, is a gift. We are lucky for every moment we get to spend with her. " Related: The Faces of Poaching: Digit the Mountain Gorilla. Pet cat Beebz is purr-fect life-saver as it rescues owner from epileptic fits. Photography by ©John Woo. Photos du journal - International Wolf Center. ✨□□□□□□Goodnight babies □□□□Sweet dreams□□□□□ Friends . ❤⛄❄□□□❤ #CatsOfTwitter. ❤❤❤ LOVE MAMY ❤❤❤ Stranded sheep rescued by sheep dog from island in Ambleside, UK - Weather & Nature. Want to know more about Newsflare? 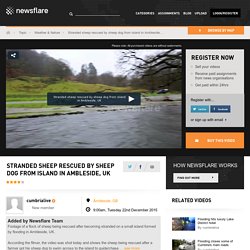 Newsflare is an online video news community and marketplace for user generated video content. Newsflare specialises in covering news that is too breaking, too remote or too local for traditional news organisations. We are all about news. Unlike many other online video sharing sites Newsflare is dedicated to user-generated news content and encourages an ethos of journalistic values. We believe in the power of video to communicate a message and our service is built to make the most of this medium.

Our goal is to ensure that all our members get the rewards they deserve. David Sheldrick Wildlife Trust for elephants in Nairobi appealing for sponsors. A sanctuary for elephants whose parents have abandoned them or been killed by poachers is appealing for donations and sponsors. 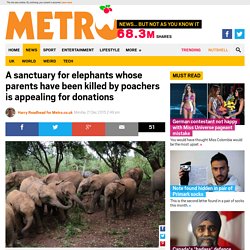 The David Sheldrick Wildlife Trust, a conservation NGO in Nairobi National Park, Kenya, recently rescued several vulnerable, milk-dependent orphaned elephants, taking the number given sanctuary this year to 29, which is almost three times as many as five years ago. This Christmas, the Trust is appealing for donations so it can provide specialist formula milk, blankets and round-the-clock care for these elephants, who must be hand-raised because they can be reintroduced to the wild. Google Translate. Buon inizio di settimana natalizia amici !! Good morning twitter friends ! #funny #owl #GoodMorning. @K2644 спасибо Гульжан. □ @WineULoveMe Thank you dear□□ Cutie pics□□□□□□ Have a lovely sunday night❄️❄️❄️□□ ☀️Happy Tuesday Everyone ❄️Wishing you a magical day ❄️Blessed with peace, love and joy □ .#currentmood Arrrrrrrgh!! □Still got more Chrimbo shopping to do! Haven't wrapped a single pressie yet!! □□□□ When nature loves you back □□□

Luna... a lovely winter day... SJ Kit Fox Pup (Wild and Endangered) Photography by ©Mark Bridger. Easy, breezy, beautiful, cover squirrel. A wounded Jaguar nursed back to health by a farmer in Costa Rica. Photo by Judylynn Malloch. □□□ Photography by ©Ignatov. I wanna go on a safari □□□ Photography by ©Than Nguyen. BBC Two - Gorilla Family & Me, Cute moments. Arctic Grizzlies Bully Polar Bears. Polar bears are the largest of all bear species, while the grizzlies that live on Alaska’s North Slope are the smallest brown bears in that state — some no bigger than the black bears that try to break into garbage cans on the hillsides around Anchorage. 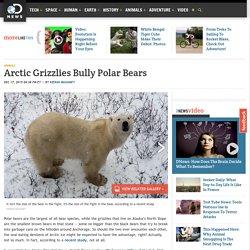 So should the two ever encounter each other, the seal-eating denizens of Arctic ice might be expected to have the advantage, right? Actually, not so much. In fact, according to a recent study, not at all. In an article for Alaska Dispatch News, Yereth Rosen spoke with Susanne Miller of the U.S. Fish and Wildlife Service, who explained that diminishing amounts of summer and fall sea ice in the southern Beaufort Sea off the North Slope have forced polar bears to spend more time ashore, grabbing whatever food they can on land. “Brown bears just showed up and polar bears left,” she said.

#Mugaruka chewing over whether or not to have @gordonjbuchanan for breakfast #GorillaFamily #kahuzibiega. @gordonjbuchanan hanging out with #Mugaruka the Gardener and #Chimanuka rival in laid-back mode #GorillaFamily. Two African lion subspecies will now be protected under the Endangered Species Act >> Nice! RT @helwatweets Wild life enjoying purple bed of #flowers #nature #wild #photo #photography #colors. Photography by ©Judy Lynn Malloch. Tiny Elephant No One Thought Would Survive Happily Rests In His Little Bed. An orphanage for baby rhinos in South Africa has been harboring a tiny secret: A tiny elephant in their midst. 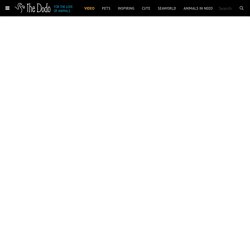 Thula Thula Rhino Orphanage recently announced on Facebook that they've been caring for Ellie for months, but he was so vulnerable they didn't want to share his story just yet. But on Wednesday the people at the rhino orphanage decided to share their secret elephant rescue with the world. "The cat's out of the bag, or is it among the pigeons....no! It's an elephant amongst the rhino! " the page shared caretaker Karen Trendler's words on Facebook. Back in September, Trendler had announced the arrival of two rhino calves, Thando and Impy within a few days of one another. What Trendler didn't mention was that a few days prior to the arrival of the two baby rhinos, a tiny 2-week-old critically ill elephant was admitted to the orphanage.

Thula Thula Rhino Orphanage. Photos du journal - Australian Geographic. A true friend is always ready to help, any time. Elephants on the move in Amboseli National Park, Kenya. So beautiful. #nature. This docile female deer carried the long-tailed macaque on her back at the Melaka Zoo in Malaysia. Red-shanked douc family group feeding in the canopy at Son Tra nature reserve in Vietnam. A stoat looks around for food in Cousset, Switzerland. Fashion Claims More Victims Than You Think. This is what a warthog and a lion in combat looks like, Kenya.

Four bear cubs climb up a tree for safety as an alpha male approaches them. Scene was captured in Finland. Photography by ©Barbara Arstall. Cheetah and Cub Under An Acacia Tree, Tanzania. We captured this rare highlight of a polar bear mom nursing her cubs. Here's some serious cute: A mountain goat nanny & kid @GlacierBayNPS in #Alaska □ Meet the news moms of the famous 'hugging dogs' Cute lion cub plays with his mother's tail. Baby penguin □ Baby Rhino. Photography by ©Thea Van Diepen. Royal Flycatcher. Avalanche search & rescue dogs keep skiers & snowboarders safe, and they love their jobs. Father and son. Chatty Texas Tigers on the @BigCatRescue Vacation Rotation Cam Snap by Anne8. A movement can be born when hope is ignited. #StartWith1Thing today >> Victoria's Riflebird Attracting Females. In need for a Hug? We’ve 7 of the Cutest Animal Hugs for you! See here . Oldest #polarbear in US celebrate 35th bday @phillyzoo.

The Australian Canine Heroes Protecting a Colony of the World's Smallest Penguins. Middle Island, a picturesque outcrop located off the coast of southern Victoria in Australia, is home to a colony of the world’s smallest penguins. 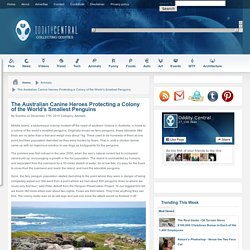 Originally known as fairy penguins, these adorable little birds are no taller than a foot and weigh only about 1kg. There used to be hundreds of them at one point, but their population dwindled as they were hunted by foxes. That is, until a chicken farmer came up with an ingenious solution to use dogs as bodyguards for the penguins. The problem was first noticed in the year 2000, when the sea’s natural current led to increased sand-build up, encouraging a growth in the fox population. The island is uninhabited by humans, and separated from the mainland by a 30-meter stretch of water. No one had an inkling of how the penguins could be saved, but a chicken farmer named ‘Swampy Marsh’ finally came up with a solution in 2006 – he suggested using dogs and generously agreed to send one of his own Maremma dogs to protect the birds. Via BBC. A female red squirrel adopting an orphan baby from an abandoned nest. Happy holidays from some very happy Texas Tigers @BigCatRescue. Snowy wildcat this morning! Doesn't look as happy as we were about it!! @SaveOurWildcats #Wildcats.

This tortoise is extinct. Scientists think they can bring it back. Tnc_79670970_preview_cropped. Tnc_81947950_preview_cropped. Elephant-Aerial_©-Ami-Vitale1-1260x708. Baby Chimpanzee Dayo And His Mother. New views bring new (and let's face it, pretty wacky) pandas! Meet Phoenix & Captiva, bobcats @BigCatRescue rehabbed and are to re-release pic by CKaye. Baby Rhesus Macaque And A Tiger Cub. Mother and son, Mwinja & Mwira. Gorilla Family & Me Monday 21:00 BBC TWO @BBCEarth #GorillaFamily. Snap & share a picture of a baby seal to win a fabulous prize, courtesy of @audubonpuffin! This is Great!! Photography by ©Francisco Mingorance. WOWPicsOfLife : Baby fennec fox. Photography by ©Servee Wijsen. What This Lioness Does To A Male Lion Is Priceless-Fuzzfix. Sleeping Lizard Discovered Using A Rose For A Bed Is The Cutest Thing You’ll See All Day. Piggyback riders: Funny photos of lazy hitchhiking animals. Bright orange monkey born at Sydney's Taronga zoo is a rare François’ langur.

Sydney’s Taronga zoo has announced the birth of a bright orange François’ langur, one of the world’s rarest monkeys. 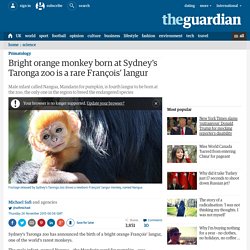 The male infant, named Nangua – the Mandarin word for pumpkin – was discovered in his mother Meili’s arms by keepers on 7 November. François’ langurs are born with bright orange fur that gradually darkens as they age. The species is endangered, with about 800 thought to remain in the wild. The monkey is found in pockets of dense forest, limestone cliffs and tropical and subtropical caves in south-west China and northern Vietnam.

It is named after Auguste François, a 19th century French consul in Lungchow, in China’s Guangxi province, who was one of the first westerners to make notes about the species. Nangua is the fourth langur to be born at the zoo, the only one in the region to breed the species. François’ langurs practise allomothering, in which a group of females participate in raising the infant, passing it around and nurturing it in turns. Young Orangutan Covering Himself From The Rain. Pygmy hippo and mom. Lion in snow. This is what a stingray's face looks like.