Weirdos from planet Earth… Deep-sea fish can live to over a hundred years and deep-sea corals hold the record of animal longevity on Earth with individuals reaching over 4,200 years. 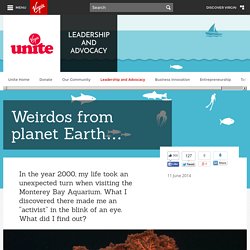 That’s right. 4,200 years. Think of it: those single coral polyps first settled on the seafloor when Egyptians were building pyramids... Today, this heritage is bulldozed in seconds by giant bottom trawlers in the pursuit of a few edible fish that no one really wants or needs. Tecolutla Turtle Preservation Project. “Kemp’s Ridley” is the American name for the species of sea turtle being protected by Fernando Manzano in Tecolutla, Veracruz, Mexico. 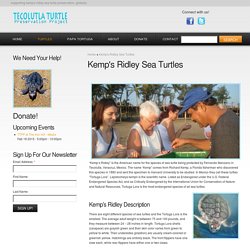 The name “Kemp” comes from Richard Kemp, a Florida fisherman who discovered this species in 1880 and sent the specimen to Harvard University to be studied. In Mexico they call these turtles “Tortuga Lora”. Lepidochelys kempii is the scientific name. Listed as Endangered under the U.S. Federal Endangered Species Act, and as Critically Endangered by the International Union for Conservation of Nature and Natural Resources, Tortuga Lora is the most endangered species of all sea turtles. SeaWorld San Diego. Sea turtles are truly a global species found in temperate and tropical seas worldwide. 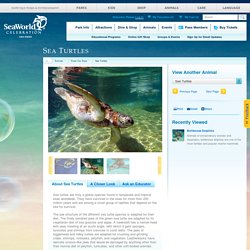 They have survived in the seas for more than 200 million years and are among a small group of reptiles that depend on the sea for survival. The jaw structure of the different sea turtle species is adapted for their diet. The finely serrated jaws of the green sea turtle are adapted for its vegetarian diet of sea grasses and algae. A hawksbill has a narrow head with jaws meeting at an acute angle, with which it gets sponges, tunicates and shrimps from crevices in coral reefs. The jaws of loggerhead and ridley turtles are adapted for crushing and grinding crabs, shrimps, mollusks, jellyfish, and vegetation. 10 marine species on the brink of mass extinction due to ocean acidification. The ocean is a delicate place, and tiny changes to its composition can cause serious devastation. 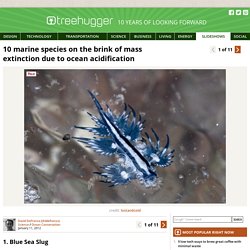 Adding carbon to the atmosphere contributes to global warming and climate change. Another less-discussed impact is ocean acidification—whereby carbon molecules diffuse into the ocean from the atmosphere, causing a steady rise in acidity—even though the impacts are already being felt by many species. The beautiful blue sea slug, seen here, is one such creature. Coral. A coral "head" is a colony of myriad genetically identical polyps.

Each polyp is a spineless animal typically only a few millimeters in diameter and a few centimeters in length. A set of tentacles surround a central mouth opening. An exoskeleton is excreted near the base. Toxic and Stinging Sea Creature Photos. Ten Amazing Facts About Ocean Animals. With over 72% of the Earth’s surface covered by salt water, the Earth’s oceans are home to 230,000 known species. 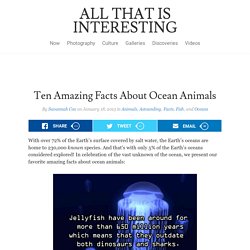 And that’s with only 5% of the Earth’s oceans considered explored! Endangered Ocean Animals. The Endangered Species Act (ESA) was signed into law on December 28, 1973 by President Nixon. 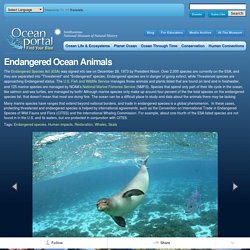 Over 2,000 species are currently on the ESA, and they are separated into "Threatened" and "Endangered" species. Endangered species are in danger of going extinct, while Threatened species are approaching Endangered status. The U.S. Fish and Wildlife Service manages those animals and plants listed that are found on land and in freshwater, and 125 marine species are managed by NOAA's National Marine Fisheries Service (NMFS). 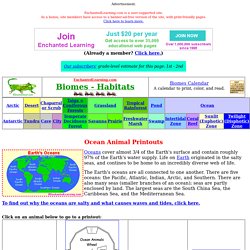 EnchantedLearning.com is a user-supported site. As a bonus, site members have access to a banner-ad-free version of the site, with print-friendly pages.Click here to learn more. (Already a member? Click here.) Ocean Animal Printouts Oceans cover almost 3/4 of the Earth's surface and contain roughly 97% of the Earth's water supply. The Earth's oceans are all connected to one another. To find out why the oceans are salty and what causes waves and tides, click here. Click on an animal below to go to a printout: Click here for an Ocean Theme page. List of Oceans Animals. 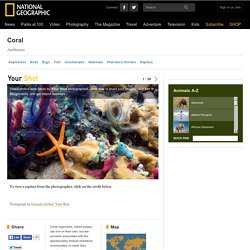 Coral polyps are tiny, soft-bodied organisms related to sea anemones and jellyfish. At their base is a hard, protective limestone skeleton called a calicle, which forms the structure of coral reefs. Weird Creatures in Abyssal Zone. The pelagic zone, part of the ocean or open sea that comprise the water column, and have the deepest benthic communities near the sea floor or bottom of the sea, and also called the abyssal zone. 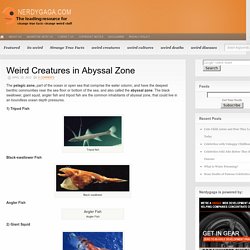