.@exploreorg's popular bear web cams are inspiring some to go Alaska's @KatmaiNPS in person. Kisses! I bet the photographer was delicious. Photo by Chris Gillete. A whale shark coming up to say hi in the Philippines - JP Swing. Little Velcro is not so little anymore! #BearCam snap by @NNJRob. The @KatmaiNPS Rangers are narrating all the #bearcam action live right now! ZOMG! Your feet are so big mom! What Happens When a Great White Can’t Breach? Mesmerizing Drone Footage Captures Dozens of Swimming Sharks. Mama and cub. U Want Some Of THIS. Sleeping Birds. Awesome picture of two red pandas! Lovely creatures! Cute Animals. 15 Cats With Their Cute Mini-Mes. Look At These Little Fluffy Cat Nuggets source Cat With Her Mini-me source The Same Cat’s Mini-Me source The Cutest Little Girl source Like Father Like Son source Matryoshka Cats source Like Mother Like Daughter source source Friend’s Cat And Her Kitten source source Cat And Her Mini-me source Mini-me source Mama Cat Hugs Her Kitten. 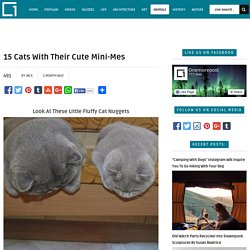 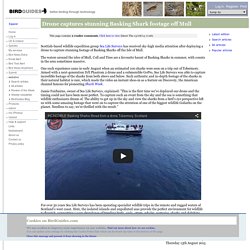 The waters around the isles of Mull, Coll and Tiree are a favourite haunt of Basking Sharks in summer, with counts in the area sometimes massive. One such experience came in early August when an estimated 100 sharks were seen on a trip out of Tobermory. Armed with a next-generation DJI Phantom 2 drone and a submersible GoPro, Sea Life Surveys was able to capture incredible footage of the sharks from both above and below. Such authentic and in-depth footage of the sharks in their natural habitat is rare, which made the video an instant shoo-in as a feature on Discovery, the American channel famous for pioneering Shark Week. Jamie Fairbairns, owner of Sea Life Surveys, explained: "This is the first time we've deployed our drone and the timing could not have been more perfect. Drone Captures Pod of Dolphins Surfing Waves Off Australian Coast. Video Evidence That Belugas Are Not What Raffi Led Us To Believe.

Explore.org “Baby Beluga in the deep blue sea/ Swim so wild and swim so free” So crooned Raffi, imagining the underwater world in which a “little white whale on the go” cavorted in and out of the waves, enjoying the utopian bliss of the sea. 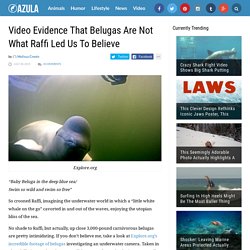 No shade to Raffi, but actually, up close 3,000-pound carnivorous belugas are pretty intimidating. If you don’t believe me, take a look at Explore.org’s incredible footage of belugas investigating an underwater camera. Study: Horses Use Facial Expressions to Communicate (Gallery) 20 Dog Best Friends That Can’t Be Separated. A Little Kiss source My Friend’s Dogs Think They Are Going To The Vet When In Reality They Are Headed To The Park source We Were Worried They Wouldn’t Get Along source. 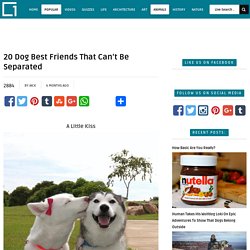 Earth Pics sur Twitter : "Salmon Run in Alaska. Life on Earth sur Twitter : "What a pretty bird. Explore.org sur Twitter : "That moment when you get the perfect #bearcam snapshot - by May B Kronstad Eide. Fisherman chased by pod of 30 giant killer whales in sunrise surprise. A pair of fishermen stumbled upon the pod of about 30 killer whales about five miles off the coast of Point Loma, in the San Diego Bay area in America. 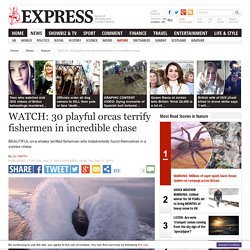 They gave a rare stunning display which was caught on camera. The orcas began to chase the boat playfully, leaping in and out of the water and even spinning around to show their stomachs. But the giant creatures got a little too close for comfort for the men who had been out fishing. As the killer whales sped towards the boat, the fishermen became unnerved and tried to get away. One of the men is heard saying, half-jokingly: "He's gonna bite my arm off. " Moments later, the same man shouts to the driver: "Go, go, go, go, go, go, go! " One whale can be seen leaping at the boat just behind its motor.

Naomi Rose, a marine biologist with the Animal Welfare Institute, explained that some orcas cruise along the boat just "for fun". She said: "This is a common behaviour in certain places. "It's called wake-riding and they are doing it for fun. Chimps may prefer cooked food according to nature experts. They revealed that chimps not only prefer cooked food but will also save it up so it can be put in a cooker. 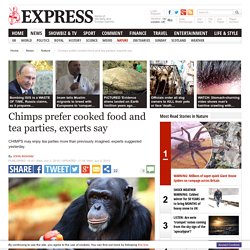 And they are smart enough to know what can be cooked and what is inedible. The study by psychologists from Harvard and Yale Universities involved putting semi-wild chimps from the Jane Goodall Institute's sanctuary in the Republic of Congo through their paces. Pictures: The Elephant who thinks it is a giraffe. The pictures show the playful elephant standing upright on its hind legs with its trunk at full stretch reaching out for the pods above. 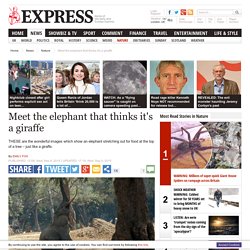 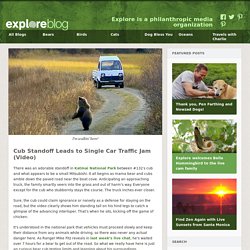 There was an adorable standoff in Katmai National Park between #132′s cub and what appears to be a small Mitsubishi. It all begins as mama bear and cubs amble down the paved road near the boat cove. Anticipating an approaching truck, the family smartly veers into the grass and out of harm’s way. Everyone except for the cub who stubbornly stays the course. The truck inches ever closer. Sure, the cub could claim ignorance or naivety as a defense for staying on the road, but the video clearly shows him standing tall on his hind legs to catch a glimpse of the advancing interloper. It’s understood in the national park that vehicles must proceed slowly and keep their distance from any animals while driving, so there was never any actual danger here. Check out the action in the highlight below: EXPLORE The Complete – Brown Bear Live Camera Experience. Life on Earth sur Twitter : "Great White Shark Breaching. Awesome. 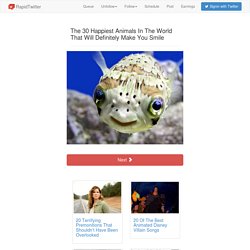 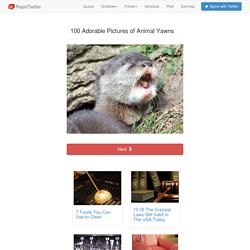