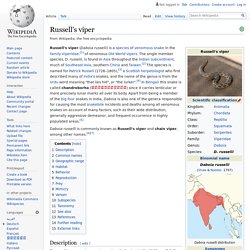 Island populations may be slightly smaller on average.[6] It is more slender than most vipers.[8] Ditmars (1937) reported the following dimensions for a "fair-sized adult specimen":[9] What Is the Natural Habitat of a Hedgehog? Hedgehogs are omnivores found naturally throughout Europe, Africa and Asia. 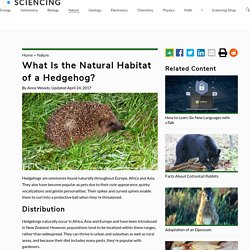 They also have become popular as pets due to their cute appearance, quirky vocalizations and gentle personalities. Their spikes and curved spines enable them to curl into a protective ball when they're threatened. Distribution Hedgehogs naturally occur in Africa, Asia and Europe and have been introduced in New Zealand. Notice Nature - October Species of the Month. Below is a list of our previous 'Species of the Month' The Hedgehog – An Gráinneog (Erinaceus europaeus) The hedgehog is a familiar species in the Irish countryside. 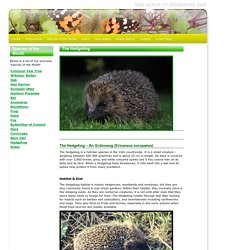 It is a small creature - weighing between 600-900 grammes and is about 25 cm in length. Its back is covered with over 5,000 brown, grey, and white coloured spines and it has coarse hair on its belly and its face. When a hedgehog feels threatened, it rolls itself into a ball and its spines help protect it from many predators. Dolphin Life Cycle.

The Life Cycle of Bottlenose Dolphins. Like coffee cup kittens, musical hamsters and cute bouncing babies, bottlenose dolphins, with their permanently etched "smiles" and playful antics, bring laughter and warmth to people around the world. 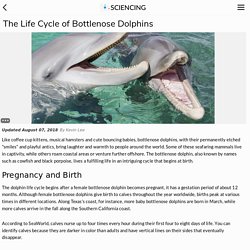 Some of these seafaring mammals live in captivity, while others roam coastal areas or venture further offshore. The bottlenose dolphin, also known by names such as cowfish and black porpoise, lives a fulfilling life in an intriguing cycle that begins at birth. Pregnancy and Birth The dolphin life cycle begins after a female bottlenose dolphin becomes pregnant, it has a gestation period of about 12 months. Although female bottlenose dolphins give birth to calves throughout the year worldwide, births peak at various times in different locations. According to SeaWorld, calves nurse up to four times every hour during their first four to eight days of life. Adult Bottlenose Dolphin Feeding.

Bottlenose Dolphin. Body Parts of a Fox. Foxes are one of nature’s most beautiful predators. 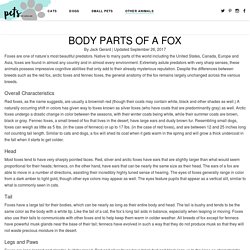 Native to many parts of the world including the United States, Canada, Europe and Asia, foxes are found in almost any country and in almost every environment. Extremely astute predators with very sharp senses, these animals possess impressive cognitive abilities that only add to their already mysterious reputation. Despite the differences between breeds such as the red fox, arctic foxes and fennec foxes, the general anatomy of the fox remains largely unchanged across the various breeds. Overall Characteristics Red foxes, as the name suggests, are usually a brownish red (though their coats may contain white, black and other shades as well.) In photos: Anatomy of a black mamba. Black mambas have a pretty bad rap. 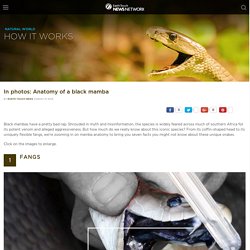 Shrouded in myth and misinformation, the species is widely feared across much of southern Africa for its potent venom and alleged aggressiveness. Mamba. Mamba. Behaviour[edit] The three species of snakes are→→→§ green mambas are arboreal, whereas the black mamba is largely terrestrial. 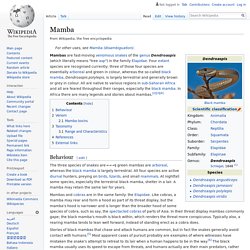 All four species are active diurnal hunters, preying on birds, lizards, and small mammals. Red Lionfish - Interesting Fishes of the Gulf of Mexico and Coastal Mississippi. June 23, 2014 - AL.Com - More Lionfish off Florida and Louisiana Than off Alabama, but There are Plenty Here, Alex Fogg was interviewed by Ben Raines regarding lionfish in the northern Gulf. 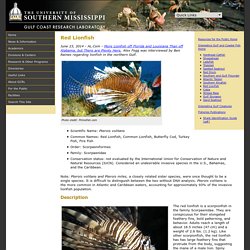 Description. Invasive Species, Sting, 11 facts about blue whales, the largest animals ever known to live on Earth. So colossal are these majestic marine mammals, their hearts alone weigh as much as a car. 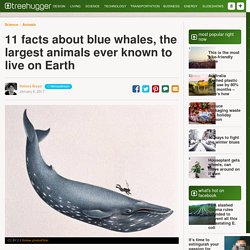 Picture in your mind a 10-story-tall animal walking down the street and you probably start channeling images of Godzilla or King Kong. But if you imagine it as a marine mammal and place it on its side, swimming … now you’ve got a blue whale. Balaenoptera musculus, the blue whale, is the largest animal ever known to have lived on the planet – movie monsters aside. 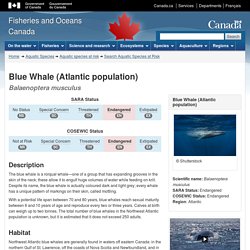 Fennec Fox (Vulpes Zerda) - Animals. Fennec Fox Location Map of Africa Fennec Fox Fennec Fox Classification and EvolutionThe fennec fox is a small species of fox found in the deserts of North Africa. They are the smallest canine species but have the largest ears relative to their body size which are used to both aid their hearing and to help them to control their body temperature in the hostile environments in which they live. Fennec Fox - Key Facts, Information & Pictures. Image Source The Fennec Fox (Vulpes zerda) is a small canid which is native to the deserts of North Africa. It is the smallest of the canines but has the largest ears in proportion to its body size. Fennec foxes are found in North Africa from Morocco to Egypt, south to north Niger and Sudan, east to Sinai Peninsula and Kuwait. Fennec Fox Life Cycle by Quinn Mamula on Prezi. Russell's viper. The Life Cycle of a Pit Viper.

Common barn owl. The Common barn owl is penas alba, a species of owl in the genus Tito. It is the most widely distributed species of owl, and one of the most widespread of all birds. The barn-owl family Tytonidae is one of two main lineages of living owls, the other being the typical owls (Strigidae). Blobfish Facts. The World's Ugliest Animal. In Defense of the Blobfish: Why the "World's Ugliest Animal" Isn't as Ugly as You Think It Is. Blobfish — 10 Facts about the Kings and Queens of Ugly. Blobfish. Blobfish are typically shorter than 30 cm. They live at depths between 600 and 1,200 m (2,000 and 3,900 ft) where the pressure is several dozen times higher than at sea level.