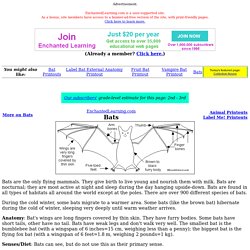 They give birth to live young and nourish them with milk. Bats are nocturnal; they are most active at night and sleep during the day hanging upside-down. Bats are found in all types of habitats all around the world except at the poles. There are over 900 different species of bats. During the cold winter, some bats migrate to a warmer area. Anatomy: Bat's wings are long fingers covered by thin skin. Senses/Diet: Bats can see, but do not use this as their primary sense. There are two types of bats that differ in their diet and in the way they sense and obtain food.

Microchiropterans: These bats use echolocation to find insects and small animals to eat. Fun Facts About Bats. Bats are the only mammals that can fly. 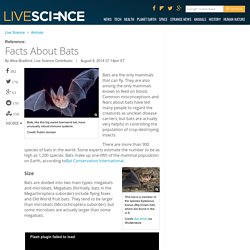 They are also among the only mammals known to feed on blood. Common misconceptions and fears about bats have led many people to regard the creatures as unclean disease carriers, but bats are actually very helpful in controlling the population of crop-destroying insects. There are more than 900 species of bats in the world. Some experts estimate the number to be as high as 1,200 species. Bats make up one-fifth of the mammal population on Earth, according toBat Conservation International. Bats are divided into two main types: megabats and microbats. Prehistoric Van Goghs: Artists Used Pointillism 38,000 Years Ago Nineteenth-century artists, such as Georges Seurat and Vincent van Gogh, weren't the first to use pointillism, according to a discovery of 38,000-year-old decorated limestone tablets in France.

Flying foxes (genus Pteropus) are the largest bats. Badger Printout- EnchantedLearning.com. The badger is a burrowing mammal with a black-and-white striped face. 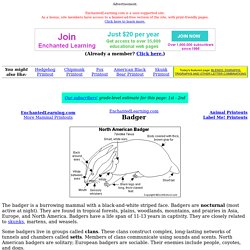 Badgers are nocturnal (most active at night). They are found in tropical forests, plains, woodlands, mountains, and prairies in Asia, Europe, and North America. Badgers have a life span of 11-13 years in captivity. They are closely related to skunks, martens, and weasels. Some badgers live in groups called clans. Anatomy: Badgers range in size from 13-31 inches (33-79 cm) long plus a short tail 4-7 inches (10-18 cm) long. Diet: Badgers are omnivores (eating both animals and plants). Hedgehog (Atelerix Albiventris) The hedgehog is thought to be one of the oldest mammals on earth, with estimates dating the hedgehog to around 15 million years ago. 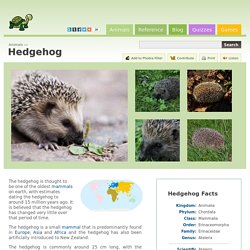 Post Comment. Young People's Trust For the Environment. Distribution: widespread, from Britain and rest of Europe, except the far north, across to Russia. 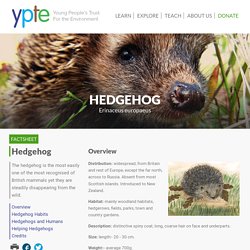