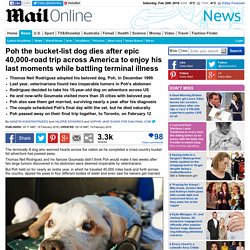 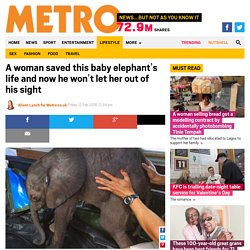 Which is adorable, but not great news for the soft furnishings. Those 20 Unique Images Will Make You Love Dogs Even More! If you don't like dogs before then that would change after you have seen these dogs with unusual markings. 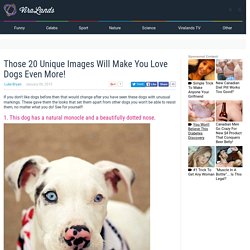 These gave them the looks that set them apart from other dogs you won't be able to resist them, no matter what you do! Cole & Marmalade – Welcome Cat People! Kekoa the giant timber wolf plays with wildlife worker and even licks her face  When a wolf has its face next to yours you have good reason to be petrified. 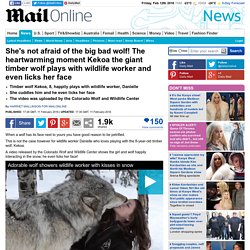 This is not the case however for wildlife worker Danielle who loves playing with the 8-year-old timber wolf, Kekoa. A video released by the Colorado Wolf and Wildlife Center shows the girl and wolf happily interacting in the snow; he even licks her face! Adorable wolf showers wildlife worker with kisses in snow. Canada Strikes Landmark Deal to Protect Over 9 Million Acres of Rainforest. @salehhadisalem تبكي ولدها …وتشكي أنظروا لعينيها…بكائه وفمهايتمتم سبحانه تحتضن صاحبها…وتصيح #أتقوا_الله_بالأم_راعوها. Look who's stepping outside! #BeiBei ventured into the yard with Mei Xiang for the first time today□ #WeSaveSpecies. Omg I love elephants □□ Look At These Tiny Meerkat Pups Exploring The Outside World For The First Time. Watch This. Watch This. Facebook. I'm a horseaddict. Baby Animals - Photos du journal. ForestEthics. Twitter. Happy day□ Happy day□ Rare black fox takes on hot-blooded red rival in fierce fight...over a vixen.

The black fox and red vixen faced off on a shed roof in Hounslow, LondonWhen the red male padded into view of the black fox, he leapt into actionTrevor Williams, of charity The Fox Project, said: 'In 27 years and dealing with some 10,000 foxes we have never had a black fox brought in' By Alison Smith-squire For The Daily Mail Published: 22:42 GMT, 29 January 2016 | Updated: 18:05 GMT, 30 January 2016 It's the mating season – and for this rare black fox it meant a fierce fight with a red rival over a vixen. 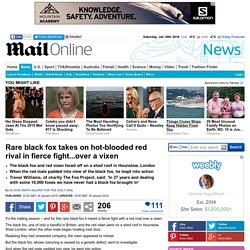 The black fox, one of only a handful in Britain, and the red vixen were on a shed roof in Hounslow, West London, when the other male began howling next door. Realising they had unwanted company, the vixen appeared to retreat. But the black fox, whose colouring is caused by a genetic defect, went to investigate. And when the red male padded into view, he went into action. What's that? Face off: There it encounters the red male, with its ears flat, back hunched and an angry snarl. Rare black fox takes on hot-blooded red rival in fierce fight...over a vixen. @70cemil @gulkag1998 i wish you a pleasent evening <3.

Wolf in snow storm...□❄❄ Lioness helping her cub with its first steps. He's missing all the action! Bungling photographer fails to spot a VERY amorous display by a pair of rhinos. Photographer in Nairobi National Park completely missed a male rhino mounting a female in the backgroundWWF-UK’s Senior Producer Greg Armfield was visiting the Mara during a lion collaring expeditionHe was himself photographed seemingly completely oblivious to the animals in the background By Sara Malm for MailOnline Published: 17:18 GMT, 19 January 2016 | Updated: 17:22 GMT, 19 January 2016 This is the hilarious moment a photographer visiting the Nairobi National Park in Kenya completely misses a pair of rhinoceros going at it right behind him. 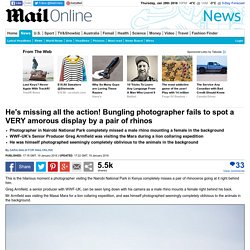 Video shows the friendship between baby elephant and his canine companion. For hundreds of years it's been common knowledge that a dog is a man's best friend. 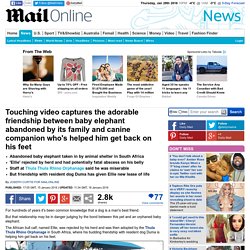 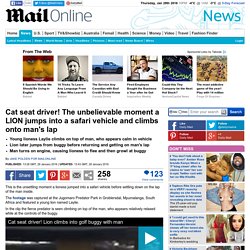 The footage was captured at the Jugomaro Predator Park in Groblersdal, Mpumalanga, South Africa and featured a young lion named Laylie. In the clip the fierce predator is seen climbing on top of the man, who appears relatively relaxed while at the controls of the buggy. Untitled. Twitter. This Selfie Taking Cat Takes Better Selfies Than You. Galapagos tortoise, a species in danger of extinction. Good morning for those who love Fauna. Un momento : te cuento un secreto.