Food chains and food webs. Every plant and animal species, no matter how big or small, depends to some extent on another plant or animal species for its survival. 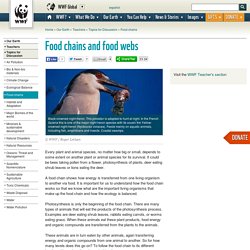 It could be bees taking pollen from a flower, photosynthesis of plants, deer eating shrub leaves or lions eating the deer. A food chain shows how energy is transferred from one living organism to another via food. It is important for us to understand how the food chain works so that we know what are the important living organisms that make up the food chain and how the ecology is balanced. Photosynthesis is only the beginning of the food chain. There are many types of animals that will eat the products of the photosynthesis process. These animals are in turn eaten by other animals, again transferring energy and organic compounds from one animal to another. Why We Need Sharks. Why We Need Sharks - Operation Requiem. Sharks ensure our very survival The frightening reality is, like them or not, sharks play a crucial role on this planet. 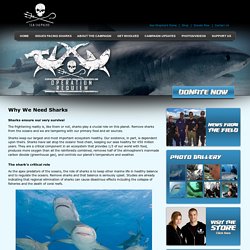 Remove sharks from the oceans and we are tampering with our primary food and air sources. Sharks keep our largest and most important ecosystem healthy. Our existence, in part, is dependent upon theirs. Sharks have sat atop the oceans’ food chain, keeping our seas healthy for 450 million years. Why are sharks important? Sharks are often the apex predator in the oceanic ecosystem, meaning that they keep the ecosystem balanced and allow populations of other creatures to maintain healthy levels. 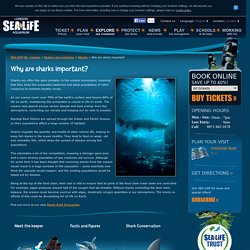 As our oceans cover over 70% of the earth’s surface and houses 80% of life on earth, maintaining this ecosystem is crucial to life on earth. The oceans help absorb excess carbon dioxide and heat energy from the atmosphere, controlling our climate and keeping our air safe to breathe. Blacktip Reef Sharks are spread through the Indian and Pacific Oceans so their populations affect a large number of habitats. Sharks regulate the quantity and health of other marine life, helping to keep fish stocks in the ocean healthy. They tend to feed on weak, old and unhealthy fish, which stops the spread of disease among fish populations. This eliminates a lot of the competition, meaning a stronger gene pool and a more diverse population of sea creatures will survive. Find out more at our new Shark Reef Encounter.

Sharks' Role in the Ocean. Declines in large shark populations on the East Coast of the US led to the collapse of North Carolina's century-old bay scallop fishery. (Source: Cascading Effects of the Loss of Apex Predatory Sharks from a Coastal Ocean - Ransom A. Myers - Dalhousie University - 2007). A study by Enric Sala of Scripps Institute of Oceanography suggests that the loss of sharks may have contributed to the decline of reefs in the Caribbean, most of which are now dominated by algae. (Source: New Scientist - April 23, 2005) The Manduca Project. Wonderful! 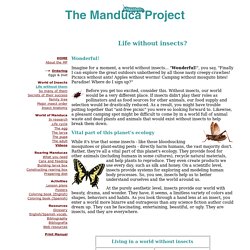 Imagine for a moment, a world without insects... "Wonderful! ", you say, "Finally I can explore the great outdoors unbothered by all those nasty creepy-crawlies! Picnics without ants! Apples without worms! Before you get too excited, consider this. Vital part of this planet's ecology While it's true that some insects - like those bloodsucking mosquitoes or plant-eating pests - directly harm humans, the vast majority don't. They even create products we use every day, such as silk and honey. At the purely aesthetic level, insects provide our world with beauty, drama, and wonder. What do bugs do. What do bugs do. Let's Talk About Insects. Getting Ready Talk about insects with your child(ren) before you begin to use the Let's Talk About Insects website. 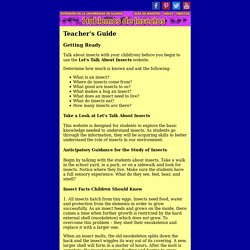 Determine how much is known and ask the following: What is an insect? Where do insects come from? What good are insects to us? Take a Look at Let's Talk About Insects This website is designed for students to explore the basic knowledge needed to understand insects. What Good Are Bugs? - National Wildlife Federation.

By Gerry Bishop; art by David SheldonPhotos by Jerzyworks/Masterfile What’s a Bug? 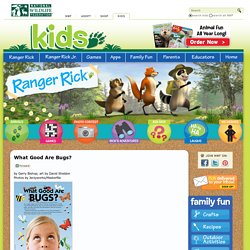 Many people use the word “bug” to mean any kind of insect or other small crawling creature, such as a spider or worm. Habitat Loss. Habitat loss—due to destruction, fragmentation or degradation of habitat—is the primary threat to the survival of wildlife in the United States. 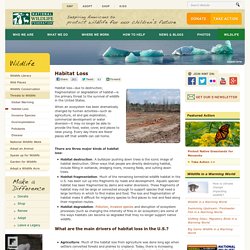 When an ecosystem has been dramatically changed by human activities—such as agriculture, oil and gas exploration, commercial development or water diversion—it may no longer be able to provide the food, water, cover, and places to raise young. Every day there are fewer places left that wildlife can call home. There are three major kinds of habitat loss: Habitat destruction: A bulldozer pushing down trees is the iconic image of habitat destruction. Other ways that people are directly destroying habitat, include filling in wetlands, dredging rivers, mowing fields, and cutting down trees. What are the main drivers of habitat loss in the U.S.? Agriculture: Much of the habitat loss from agriculture was done long ago when settlers converted forests and prairies to cropland.

Pollution: Freshwater wildlife are most impacted by pollution.