Watch Dogs Play In The Mud Because It's Too Darn Fun To Ignore. 25 Hilarious Photos Of Alpacas With The Most Amazing Hair Ever. Watch This Hilarious Subtitled Argument Between Two Huskies. When It Comes To Passive Aggressive Behaviour, These Cunning Cats Have Totally Nailed It. The Moment These Three Bears See A Balloon For The First Time Is Just Brilliant. Crazimals - A surprisingly tender moment between this... Mark Eatwell - Splendid fairy wrens found in Bedfordale...

Finalizando a série "Banhos" com o... - Projeto Tatu-Canastra/Giant Armadillo Project - Brazil. This proves how smart animals are - Best Videos Today. Newsner.com - They released 14 wolves into a park. What... The Dodo - This dog watched through the window as a wild... UNILAD - Just a tiny porcupine called Wilbur eating a... I Love Horses - A horse who likes to blow water bubbles!

This is so cool! How did she teach her... - Now I've Seen Everything. Break - Momma raccoon taking the kids home for the day... Happy Tails - This goat can't get enough with her new... Beauty of nature □ kindly rate our... - Beauty Of Nature. Kolmården - Fyrlingar i björnfamiljen! □ Här får mamma... UNILAD - The daily struggle □□ via ViralHog. Cuddle time ♥ Credit:... - Adorable Animals. 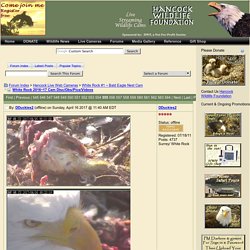 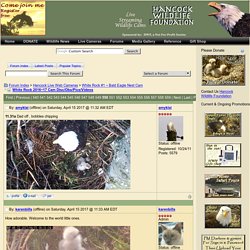 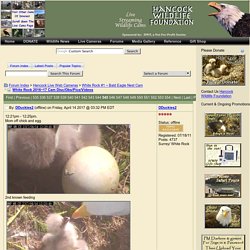 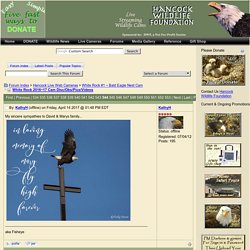 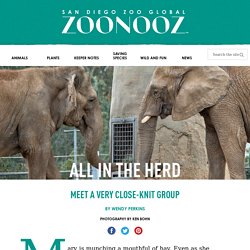 Even as she chews—and chews, and chews—she reaches into the feeder to grab a fresh trunkful. Shaba approaches slowly, trunk extended, then stops and waits. Mary shifts slightly, and Shaba moves forward to feed beside the leader of the herd, touching her gently with her trunk before reaching for the feeder. The subtle social structure of the San Diego Zoo’s elephant herd is strong and healthy. The Harry and Grace Steele Elephant Odyssey is currently home to seven elephants: six females and one male. GOLDEN GIRLS … AND GUY At 51 years old, Mary is the oldest elephant in our herd. At 49 years old, Ranchipur is the fifth-oldest male elephant in North America. When Mila Met Mary…and Friends Mila came to the San Diego Zoo from the Franklin Zoo and Wildlife Sanctuary in New Zealand. Once Mila had settled into a routine and trusted relationships with her new caretakers in San Diego, it was time for her to begin meeting the herd. 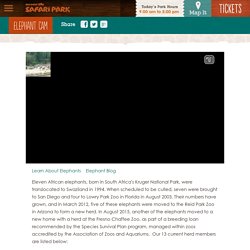 When scheduled to be culled, seven were brought to San Diego and four to Lowry Park Zoo in Florida in August 2003. Their numbers have grown, and in March 2012, five of these elephants were moved to the Reid Park Zoo in Arizona to form a new herd. In August 2015, another of the elephants moved to a new home with a herd at the Fresno Chaffee Zoo, as part of a breeding loan recommended by the Species Survival Plan program, managed within zoos accredited by the Association of Zoos and Aquariums.

Labor Of Love – ZOONOOZ. It takes a village to raise a child, and recently it took a department—several, actually—to save and raise a tiger cub. 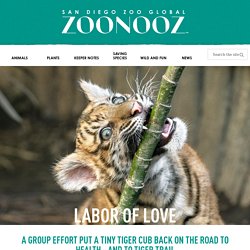 When Joanne, a first-time Sumatran tiger Panthera tigris sumatrae mother at the Safari Park, had trouble caring for her newborn singleton cub, a combination of veterinary expertise, teamwork, and a little good luck all joined forces to cure his ailments and bring him roaring back to recovery. Many people poured their heart into getting the little tiger back on his feet, and the dedication it took to save him is reflected in his name, Suka, which means “loved” in the Malay language. The number of pounds of meat a tiger can consume at one “sitting.” A “Ruff” Start Born in the wee hours of September 14, 2015, all appeared to be well with the cub until four days later, when Joanne stopped looking after him—something not uncommon with single tiger births, explains Lissa McCaffree, a lead animal keeper at the Park. The number of tiger subspecies still in existence. The Newest “Stripe” in the “Streak” – ZOONOOZ. Sometimes, I don’t know if I’m training Suka or if Suka is training me. 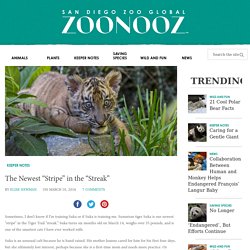 Sumatran tiger Suka is our newest “stripe” in the Tiger Trail “streak.” Suka turns six months old on March 14, weighs over 35 pounds, and is one of the smartest cats I have ever worked with. Suka is an unusual cub because he is hand-raised. His mother Joanne cared for him for his first four days, but she ultimately lost interest, perhaps because she is a first-time mom and needs more practice. Suka Has a Playmate! – ZOONOOZ. *Featured image of Suka by Todd Lahman* 1-year-old Suka is one of my favorite tigers I’ve had the pleasure of knowing in my 25-year career in the Zoo field. 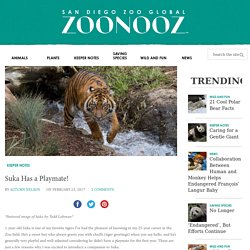 He’s a sweet boy who always greets you with chuffs (tiger greetings) when you say hello, and he’s generally very playful and well-adjusted considering he didn’t have a playmate for the first year. These are just a few reasons why I was excited to introduce a companion to Suka. Suka grew up in the Animal Care Center nursery after his mom decided not to care for him after five days. The veterinarians discovered that he had a severe kidney infection, so he required extensive treatment for the first several weeks of his life. After Suka moved to Tiger Trail he was housed near other tigers so that he could observe tiger behavior.

In January we started the process of getting them together. Autumn Nelson is animal care supervisor at the San Diego Zoo Safari Park. Bear Apparent – ZOONOOZ. When you’re descended from what could be considered Zoo royalty, it can be difficult to escape your family’s shadow. 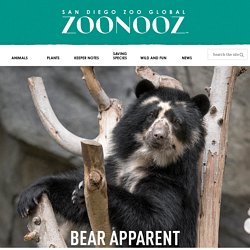 That is, of course, unless you happen to be a smart and sassy little Andean bear named Alba. Alba came to the Zoo late last spring. While she has some very well-known paw prints to fill, she also has the spirit and personality to shine all on her own. Because of year-round food availability, Andean bears do not hibernate. A “Grand” Tradition “Alba is the granddaughter of Miss Houdini and Tommy,” says Hali O’Connor, a senior keeper at the Zoo. PLAY WITH YOUR FOODWorking on food puzzles is just one of the ways Alba spends her time. Since Alba is barely two years old, she won’t be dealing with mates and cubs for a while, as bears breed for the first time when they are between four and seven years old. What’s New with the Three Bears? – ZOONOOZ. There’s a lot going on at the Zoo’s Conrad Prebys Polar Bear Plunge, 24 hours a day—even after all the guests go home and the keepers clock out for the night.

At various hours, timed scent dispensers are releasing intriguing smells for the bears to investigate, food is provided at different and unexpected times, and the bears are exploring vegetation and ever-changing enrichment items in every part of their enclosure—indoors and outside—all day and all night long. “We put synthetic raccoon urine out there (in the exhibit) today,” explained Nate Wagner, senior keeper.

“Our bears are incredibly active, and they are interacting with their environment constantly. No two days are the same here—and the polar bears decide how things are going to go.” Polar Bears Participate in Research—and Their Own Health Maintenance – ZOONOOZ. Along with exploring their exhibit and showing off natural polar bear behaviors, the bears of the Zoo’s Conrad Prebys Polar Bear Plunge are also participating in research that could eventually help polar bears in the wild, and they are participating in their own health maintenance activities.

Tatqiq—the Zoo’s 580-pound, almost-16-year-old female—has learned how to wear an accelerometer collar—which works something like a giant Fitbit for polar bears, monitoring her movement and activity. The results are being used to create baseline readings for a typical, healthy polar bear that can be compared to readings from collars worn by polar bears in the Arctic, in a study being conducted with San Diego Zoo Global partners at the U.S. Geological Survey. Tatqiq is also currently training to participate in a treadmill test. The accelerometer tracks Tatqiq’s activity on land as well as in the water (seen at the top of this post). “You’ve got to give our polar bears credit,” Nate added. San Diego Zoo Polar Bear Contributes to Energetics Research – ZOONOOZ. Female Bear Prepares to Walk on Treadmill Tatqiq, a 580-pound polar bear at the San Diego Zoo, is making new strides in her “fitness” training. Animal care staff and scientists at the Zoo’s Institute for Conservation Research have been preparing the 17-year-old female to voluntarily take part in a U.S.

Geological Survey (USGS) project that is studying the energy demands polar bears face in the Arctic—an example of the role that zoos play in conservation science. This week, biologists from the USGS and University of California, Santa Cruz successfully collected data on Tatqiq’s resting oxygen consumption, in preparation for the next phase of the study: walking on a motorized treadmill. “Collecting oxygen consumption (data) gives us a measure of energy expenditure,” said Anthony Pagano, a wildlife biologist with the USGS. Rhino Baby Refuses To Leave Mom’s Side. Every mom can agree: After you’ve given birth, it is virtually impossible to get any time to yourself. If you do get some alone time, you’ve probably got a mere 60 seconds before your little one realizes that they can’t see you!

One mama rhino in Australia is learning this firsthand, if she didn’t already know. After giving birth to a healthy, 55-pound baby girl, she’s experiencing the happiness that comes with a new baby. But her little one is also adamant about remaining right by her mama’s side! Wherever her mama goes, she goes. The baby rhino is not yet on display to visitors at the zoo, as she’s still too young. As rhinos are endangered, zookeepers say that this little one will be important in the conservation of her species. If you love to see rhino babies happy and doing well, you’ll also enjoy this video of a little rhino snuggled up in a blanket and enjoying some nice, warm milk. Only Female Polar Bear In Australia Gives Birth. Polar bears are a species on the brink: with their natural habitat in decline, the numbers are decreasing, and there are fewer and fewer individuals found in the wild.

But thanks to conservation efforts around the globe, this decrease had been slowed down by polar bear births. Many zoos and institutions participate in a breeding program that will help ensure the animal’s survival as a species. Sea World Gold Coast in Queensland, Australia, (unaffiliated to the SeaWorld parks in the United States) is part of this program. The park recently welcomed two tiny newborns to their family. The only female polar bear in the country resides there. Keepers installed infrared cameras and microphones in her maternity den so they could monitor her all day and night. Elephant Runs To The Rescue Of It's Caretaker. Animals are a beautiful part of our world. Out in the wild, however, they can often find themselves in danger. 11 Weird Cat Facts You Probably Don’t Know. There are two types of people in this world: dog people and cat people.

Sure, sure, you can love both kinds of furry friends, but I bet deep down you connect with one more than the other.