Earth - The truth about meerkats. Are these the top 5 cutest animals ever? Crime of Passion. Crime of Passion. 9 bizarre animal mating habits: Strange love. 10 vibrant animals: Brown panda bear. 10 animals with color mutations: Colorful creatures. 29 Adorable Moms And Their Babies From The Animal Kingdom. These 42 Adorable Animal Photos Will Melt Your Heart With Their Cuteness. We can all use a pick-me-up when our days start to drag and the coffee just doesn't seem to be kicking in. 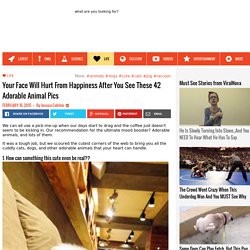 Our recommendation for the ultimate mood booster? Adorable animals, and lots of them. It was a tough job, but we scoured the cutest corners of the web to bring you all the cuddly cats, dogs, and other adorable animals that your heart can handle. Sneaky giraffe steals woman's purse. Photos Reveal Life Inside Retirement Home For Ringling Bros. Elephants. The elephants at Ringling Bros. are finally getting out of the ring and off the railroad. 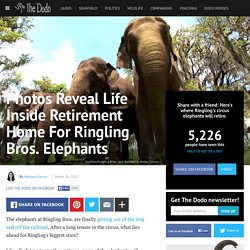 After a long tenure in the circus, what lies ahead for Ringling's biggest stars? Like all of America's other retirees, many of the elephants will eventually head to Florida, where Ringling Bros. has its Center for Elephant Conservation. Home to the largest herd of Asian elephants in the western hemisphere, the 200-acre plot has long served as a stronghold for the company's breeding and training programs. A video produced by Ringling gives a glimpse inside the center: Clearly, the center is leaps and bounds away from the life of a traveling circus elephant, which involves being locked in boxcar for days on end, performing tricks for a crowd and standing on hard concrete that can cause severe foot injuries. Facebook. 10 strange and beautiful horse breeds. Horses have been domesticated for thousands of years, and in that time we've had a chance to influence some extraordinary breeds. 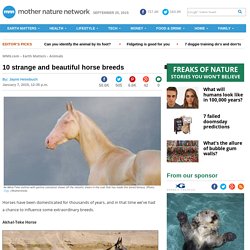 Akhal-Teke Horse Photo: Artur Baboev/Wikipedia The Akhal-Teke is best known for its incredible coat which has a metallic sheen, something unique to the breed. This, combined with its lanky, delicate features, has earned it the nickname of the "supermodel" of the horse world. Though the sheen can be present in any coat color, the colors that show it off the best are buckskin (shown above), palomino, cremello (shown below) and perlino. Akhal-Teke.org explains why the shimmering effect of the coat happens: "This is caused by the structure of the hair; the opaque core is reduced in size and in some areas may be absent altogether. 18 strange and beautiful hummingbird species. Birds, bats, bees and other insects are all important pollinators, but hummingbirds seem to do the job with the most flare. 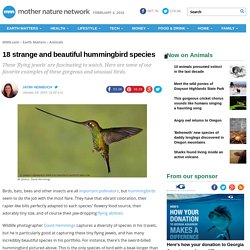 They have that vibrant coloration, their rapier-like bills perfectly adapted to each species' flowery food source, their adorably tiny size, and of course their jaw-dropping flying abilities. Wildlife photographer David Hemmings captures a diversity of species in his travels, but he is particularly good at capturing these tiny flying jewels, and has many incredibly beautiful species in his portfolio. For instance, there's the sword-billed hummingbird pictured above.

This is the only species of bird with a beak longer than its body. 11 things humans do that dogs hate. Dogs try to be our best friends, but boy do we ever make it difficult sometimes. 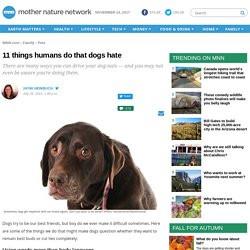 Here are some of the things we do that might make dogs question whether they want to remain best buds or cut ties completely: Using words more than body language We’re a vocal species. We love to chatter away, even at our pets, who can’t understand the vast majority of what we’re saying. Dogs might be able to deduce what a few key words mean — walk, treat, toy, off — and maybe even learn hundreds of words as some border collies have done. FOX 10 Phoenix - YouTube. The Desert Lions ~ Lion Family Structure.

A decade of research on Namibia’s desert lions by carnivore expert Dr. 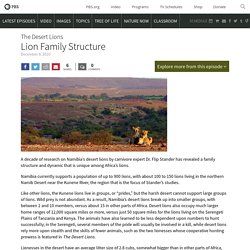 Flip Stander has revealed a family structure and dynamic that is unique among Africa’s lions. Namibia currently supports a population of up to 900 lions, with about 100 to 150 lions living in the northern Namib Desert near the Kunene River, the region that is the focus of Stander’s studies. Caddy: Sofa/Couch Side Table par iSkelterProducts. ZooBorns. Facebook. Bill Lea - Photos du profil. Courtney Luper - Photos du journal. Facebook. National Geographic Books. National Geographic Books. 20 Times Dogs Proved To Be Horrible At Playing Hide-And-Seek. Dogs truly are man's best friend. 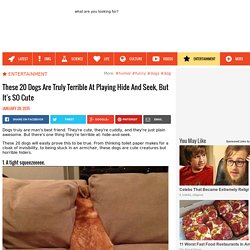 Finding The Sniper In These 8 Photos Will Drive You Insane. We all know that trained snipers can hide in places we'd least expect, naked from the human eye. 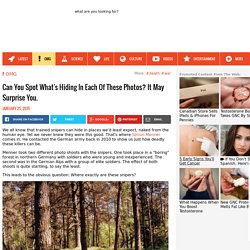 Yet we never knew they were this good. That's where Simon Menner comes in. He contacted the German army back in 2010 to show us just how deadly these killers can be. Menner took two different photo shoots with the snipers. This Man Took 5 German Shepherds For A Walk Without A Leash. These Party Animals Got A Little Out Of Control On New Year's Eve. Oof. 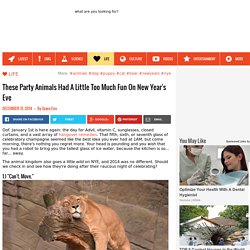 January 1st is here again: the day for Advil, vitamin C, sunglasses, closed curtains, and a vast array of hangover remedies. That fifth, sixth, or seventh glass of celebratory champagne seemed like the best idea you ever had at 1AM, but come morning, there's nothing you regret more. Your head is pounding and you wish that you had a robot to bring you the tallest glass of ice water, because the kitchen is so... far... away. The animal kingdom also goes a little wild on NYE, and 2014 was no different. 27 Dogs And Cats That Are Way Too Clingy For Their Own Good. Personal space is a sacred thing. 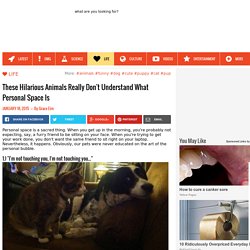 When you get up in the morning, you're probably not expecting, say, a furry friend to be sitting on your face. A Guy Found This Adorable Ermine While Hunting In The Woods. You Should Definitely Adopt Pets Instead Of Purchasing Them From A Pet Store Or A Breeder. Adding a dog to the family is always a big decision. You've got to ask yourself many questions before arriving at the conclusion to bring a furry friend into your home. Abandoned French Chateau With Amazing Secret Tunnel. These 46 Brilliant Hacks Could Save Your Puppy's Life.

Dog lovers are always looking to make things better for their pets and themselves. After all, what's better than making their lives a little better? Making yours too ;) That's why we've complied the 46 best doghacks for you. Enjoy! The 24 Saddest Animals In The World Didn't Get What They Wanted For Christmas. These Animal Facts Will Make You Appreciate Our Similarities, Differences, And How Animals Help Us. Many animals are much more similar to us than we think. Some can feel sadness or grief as powerfully as we can, some can solve puzzles just as easily as we can, and some are simply more polite than we are. We're learning more about their lives all the time, while also learning how they can drastically affect our lives. We inhabit this single planet, so we might as well learn to appreciate our neighbors - mammalian, insect, or otherwise - for all they are and for all they can lend to us. 1.) Being Caribou. 16 Insane Things That Can Happen In A Canadian Winter.

Winter is coming. And though many Canadians dread it ... Some incredible things can happen. Like a frozen water sprinkler. Or water guns filled with ice. These 23 Photos Of Massive Animal Migrations Will Humble You. Humans seem to forget how big Planet Earth is, and just how small our part in it is. These 23 breathtaking pictures of giant animal herds in motion should help put things in perspective. These Cats Can Fit Into Just About Anything. 17 Animal Family Photos Cuter Than Your Family Photos. Squirrel Cam Catching Squirrels In The Act. Squirrel Cam Catching Squirrels In The Act. These Animals Have Shocked Faces Because Of What You Did. These Gorgeous Photographs Capture Animals Enjoying Fall. 23 Incredibly Adorable Facts About Animals. 10 Beautiful Photos Remind Us Why We Need Nature. The stories behind 3 amazing, award-winning wildlife photos. Photo: Michael "Nick" Nichols/National Geographic National Geographic magazine is known for its out-of-this-world photography, so it's no wonder that three of the magazine's contributing photographers would dominate the 2014 Wildlife Photographer of the Year Awards, one of the world's most prestigious photography competitions.

Now in its 50th year, the awards are presented by the British Natural History Museum and BBC Worldwide. The competition attracted more than 42,000 entries from amateur and professional photographers around the globe, but it was American photographer Michael "Nick" Nichols who nabbed the grand prize title for his beautiful photo "The Last Great Picture," which was previously featured in National Geographic magazine.

NC Zoo otter pup takes first swim. DILLIECAM on USTREAM: Dillie the HousDeer www.dilliedeer.com. Pets. Santa Cruz Pumas. Wildlife Photography. A Man Among Wolves. Lion Triplets Meet Dad For The First Time; Immediately Annoy The Hell Out Of Him. 30 Animals With Their Adorable Mini-Mi Versions. 22 Adorable Before And After Pictures Of Animals Growing Up. Terry Bennett. Decorah Eagles. (27) Oasis HD - Timeline Photos. Home. Lion Whisperer gets up close and personal with wild lions. Isabella Monaco. Trey Descant. I can’t believe what this dog did while her human was away! It will blow your mind.

I can’t believe what this dog did while her human was away! It will blow your mind. (7) Tin Man Photography. Bloghuts - This dog is super awesome!' Parks Canada staff get stunning wildlife photos in Banff. 17 Hiding Animals Are Failing Miserably At Their Attempt. Snow Geese in Missouri are So Numerous They Block Out the Sky. WATCH: Did This Expert Just Figure Out How to Talk to Dolphins? Husky Verbally Refuses to Go Into His Kennel. THE EPIC COLLECTION - 30 Mishka Videos! Laika meets Mishka & Moki! Elena Shumilova / Photos. Eagle used to battle bird strikes - CBC News Vancouver at 6 - CBC Player. Cougar family snapped strolling Sunshine Coast beach - British Columbia. Diversionary Feeding. International Wolf Center - 31 December 2013 - A Year in Review. International Wolf Center - 31 December 2013 - A Year in Review.