20 Naughty & Cheeky Pussy Cats Are Shamed In The Cutest Way Possible. ZooBorns - Bulldozers Can't Stop Baby Echidna. Meetville. K9 Instinct - Beautiful German Shepherd playing with her... Un-bear-ably cute! These rescued bear cubs need your attention. While her owner gets ready to run the Boston Marathon on Monday, Alice the pug is also in training to give her puppy legs a workout. 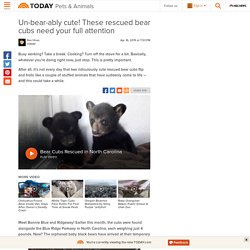 Alice, nicknamed "Big Al,'' is getting ready to run a "puppy marathon" of .262 miles to raise money and awareness for the non-profit Pug Rescue of New England. Courtesy of Julia McGovern Alice the pug is in "training" for her own puppy marathon after her owner runs the Boston Marathon. Alice's owner, Julia McGovern, 24, will run in her second Boston Marathon this year and thought it would be a fun idea for Alice to run one of her own for a good cause.

McGovern has set up a DreamFund page for those looking to donate during Alice's "training. " "While I was training for the (Boston) Marathon, I also was fund-raising for House of Possibilities,'' McGovern told TODAY.com. Alice's puppy marathon is helping to raise money for the non-profit Pug Rescue of New England. "She goes for lots of walks, and we take her on the beach,'' McGovern said.

Humming Bird - Photos du journal. Lioness does the unthinkable to save her stranded baby cub. This is incredible.Onemorepost. The instinct of motherhood is undoubtedly one of the strongest. 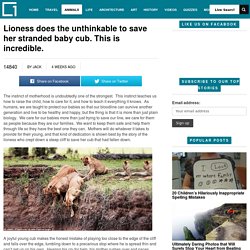 This instinct teaches us how to raise the child, how to care for it, and how to teach it everything it knows. As humans, we are taught to protect our babies so that our bloodline can survive another generation and live to be healthy and happy, but the thing is that it is more than just plain biology. We care for our babies more than just trying to save our line, we care for them as people because they are our families. We want to keep them safe and help them through life so they have the best one they can.

Mothers will do whatever it takes to provide for their young, and that kind of dedication is shown best by the story of the lioness who crept down a steep cliff to save her cub that had fallen down. A joyful young cub makes the honest mistake of playing too close to the edge of the cliff and falls over the edge, tumbling down to a precarious stop where he is spread thin and can’t get up on his own. First Nesting Bald Eagle Pair Confirmed in New York City. Starting a family in New York City is not for the faint of heart—the rent is high, the school system is overwhelming, and stroller traffic keeps getting worse—but that hasn't deterred a young couple of Bald Eagles. 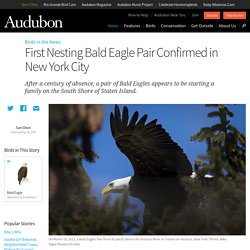 The pair has taken up on the South Shore of Staten Island, and they appear to be incubating eggs—making the very first active New York City Bald Eagle nest reported in 100 years, New York City Audubon announced this morning. Local birders have named the male Bald Eagle Vito, and are eagerly awaiting the offspring (Bald Eagle incubation period lasts between 34-36 days, and the incubating behavior was first spotted last week). “The eagles are engaging in brooding behavior typical of nesting birds incubating their eggs,” says Tod Winston, communications manager and research assistant for NYC Audubon. “Due to the height and location of the nest, it is not possible to actually see into it from the ground.” We’re pretty excited that Bald Eagles are making New York City home. 7 Palms Full Of Cuteness. Earth - Apes reveal secrets to good sleep. Watching an orangutan sleep is like watching a giant, orange baby slumbering sweetly. 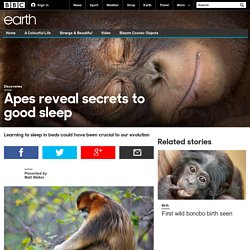 These huge great apes like to get into bed, and nestle down for a long and deep night’s sleep, their eyes occasionally dancing behind their eyelids, perhaps dreaming a fleeting orangutan’s dream. Watching a baboon sleep is more like watching a small bitter paranoid person desperately trying to get some shut eye. Sleep has only recently been acknowledged as a potentially critical factor in human evolution They sleep badly; sitting upright, balancing on their bottoms, minds whirring, constantly fearful that something or someone is after them. CCp8q5HW4AAHsy-.jpg (JPEG Image, 600 × 450 pixels) This Sleepy San Diego Zoo Jaguar Cub Can't Keep His Eyes Open. Two weeks ago, a seven-year-old leopard, Nadiri, gave birth to a beautiful baby cub at the San Diego Zoo. 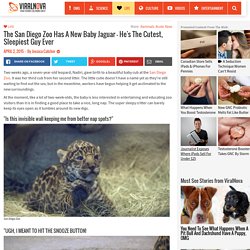 It was her third cub from her second litter. The little cutie doesn't have a name yet as they're still waiting to find out the sex, but in the meantime, workers have begun helping it get acclimated to the new surroundings. At the moment, like a lot of two-week-olds, the baby is less interested in entertaining and educating zoo visitors than it is in finding a good place to take a nice, long nap. The super sleepy critter can barely keep its eyes open as it tumbles around its new digs. They Told Their Bird He Had To Go To The Vet. What He Did Next Was SO Ridiculous.Onemorepost. Life on Earth sur Twitter : "Wall-climbing Mountain Goats.. Hokkaido Island In Japan Is Home To 7 Incredibly Cute AnimalsOnemorepost. 7 Of The Most Breathtakingly Pretty Fox Species In The WorldOnemorepost. Name the type of fox you love most? 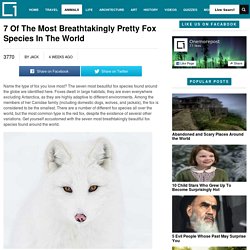 The seven most beautiful fox species found around the globe are identified here. Foxes dwell in large habitats, they are even everywhere excluding Antarctica, as they are highly adaptive to different environments. Among the members of her Canidae family (including domestic dogs, wolves, and jackals), the fox is considered to be the smallest. There are a number of different fox species all over the world, but the most common type is the red fox, despite the existence of several other variations. Russian Miner Spends His Breaks Taking Photos Of Foxes In The Arctic CircleOnemorepost. Ivan Kislov, a miner from Russia, spends his break time in the remote Chukotka region of North-East Russia, which is an arctic tundra region and has unfavorable living conditions. 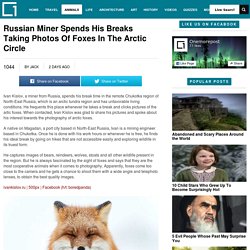 He frequents this place whenever he takes a break and clicks pictures of the artic foxes. When contacted, Ivan Kislov was glad to share his pictures and spoke about his interest towards the photography of arctic foxes. An Adorable And Unlikely Friendship Between An Owl and A DogOnemorepost. Animal photographer Tanja Brandt captures affectionate moments between Ingo the shepherd dog and Poldi the owl. 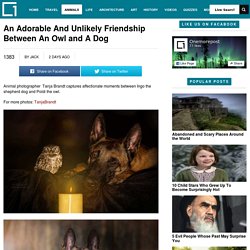 For more photos: TanjaBrandt. Welcome to Twitter - Login or Sign up. The Story of Leo, Baloo and Shere Khan: The Inseparable Bond Between a Bear, Lion and TigerOnemorepost. Leo: an African Lion, Baloo: an American Bear and Shere Khan: a Bengal Tiger, are perhaps the only combination of bear, tiger and lion that share the same space. 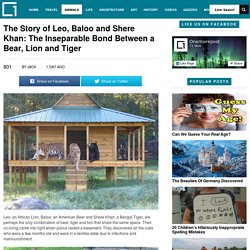 Their co-living came into light when police raided a basement. They discovered all the cubs who were a few months old and were in a terrible state due to infections and malnourishment. The police officers then shifted all three cubs to Noah’s Ark, a sanctuary for animals in Locust Grove, Georgia. It is a non-profit organization spread over 250 acres and has over 1,500 animals ranging from over 100 species. It is a home for animals that are injured, abused, neglected or animals that are in need of care. The condition of Baloo was terrible as the flesh had started growing all over and above it. Welcome to Twitter - Login or Sign up. Mother and daughter elephants reunite and prove they don't forget.

April 04, 2015: An Asian elephant that was taken from its mother by the Thai tourism industry has been returned after being rehabilitated by wildlife workers. 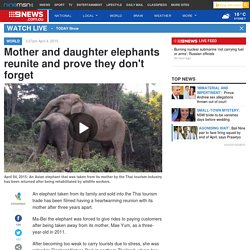 An elephant taken from its family and sold into the Thai tourism trade has been filmed having a heartwarming reunion with its mother after three years apart. Ma-Bei the elephant was forced to give rides to paying customers after being taken away from its mother, Mae Yum, as a three-year-old in 2011. After becoming too weak to carry tourists due to stress, she was retired to Elephant Nature Park in northern Thailand, where her new owners set out to reunite her with her mother.

They were filmed being reunited on Friday, and going by the happy scene at their reunion, they certainly hadn't forgotten each other. Caretakers at Elephant Nature Park are now said to be working towards returning the pair to the wild. Mother and daughter elephants reunite and prove they don't forget. Giant tortoises breeding on Necker. Earth - Amazing birth of a baby kangaroo. BBC - Earth - Amazing raven intelligence. 17 Animal Family Photos Cuter Than Your Family Photos. Family photo day is always a hassle. It might be scientifically impossible to gather everyone together in nice clothes without anyone making a goofy face. Your only hope is that the photographer managed to get at least one decent photo where you all look like a normal, happy family. Maybe we should take a cue from the animal kingdom. There's no need for silly poses with these adorable families. Their candid moments will inspire you to capture your family in a different light.

What Elephants and Whales Look Like From Space — The Atlantic. Only two creatures—both mammals—have been seen by private orbiting cameras. When satellite companies talk about the imagery they capture, they play up how you can see big, human-made things: planes and trains and parking lots. Sometimes they might mention, too, how important sky pictures are to foresters or farmers. But as I’ve seen more and more projects that involve imagery, I’ve been struck by the non-human things you can see. Specifically, the animals. At least two projects have glimpsed individual creatures at “commercially available” resolutions, about the same level as you can see on Google Maps. 1. Above is an elephant walking by itself in the Botswana’s Okavango Delta. Mostly, though, elephants are spotted in herds.

Earth - All animal life in 35 photos. The number of species per phylum is always changing, as more animals are discovered. In 2014 alone, over 1,400 new marine species were discovered, and the largely unexplored deep sea surely holds many more surprises. Also, seemingly separate phyla sometimes turn out to be the same. As a result, this list of phyla is not definitive. But it is our best attempt to sum up the vast diversity of Earth's animal life. Alberta Photographer Of The Month: Andrea Halwas And Chad Larsen (PHOTOS) With spring right around the corner, we have to admit we're excited. Like many other Albertans, we're ready to shed our winter woolies, trade our skis for hiking boots, and hit the mountain trails. These stunning photos of Alberta wildlife are just fueling that fire. Husband-and-wife photography team Chad Larsen and Andrea Halwas have been shooting wildlife and landscapes across western Canada together for six years.

Together they own Thirteenth Avenue Photography, and also specialize in lifestyle and family photography. There were kind enough to share some of their awesome animal portraits with us, and answer a few questions about what it's like to work alongside the person you love: