22 Of The Cutest Animal Parenting Moments Ever. This Hermit Crab Upgrades Her Shell Then Transfers Over The Sea Creatures Living On The Old One. This Squirrel Was Rescued From A Hurricane. Her Adorable Antics Will Make You Smile. These Dogs Are Meeting Baby Animals For The First Time With A Hilarious Mixture Of Reactions. 20 Cute Photos Of Animals Eating That Will Make You Smile. Watch Nora The Amazing Piano-Playing Cat Performing Live With A Symphony Orchestra. His howl can change the world because it... - Wolf Conservation Center. The Toronto Zoo - At least someone was happy to wake up to... Avantgardens - Little Squirrel Snow Plough! Omg I Like This - #ILIKETHIS. Beautiful. Via -po.st/WUQ7R2 - The Rainforest Site. Second Polar Bear Birth of the Year for Germany. Three years after the birth of twin Polar Bears at Hellabrunn Zoo Munich, they are celebrating another arrival. 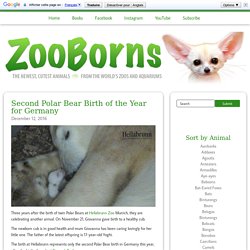 On November 21, Giovanna gave birth to a healthy cub. The newborn cub is in good health and mum Giovanna has been caring lovingly for her little one. The father of the latest offspring is 17-year-old Yoghi. The birth at Hellabrunn represents only the second Polar Bear birth in Germany this year, after the birth of a cub at Tierpark Berlin. Photo Credits: Tierpark Hellabrunn In their natural habitat, expectant females dig a den in a snowdrift, which provides shelter for giving birth and provides protection for the vulnerable newborn.

Following this voluntary seclusion by Giovanna, zookeepers were curious to find out if another cub would be born in the Polar World exhibit this year. The new cub is getting bigger and more active with each passing day. According to keepers, the cub currently weighs about 600 grams and is approximately 20 cm tall. First Pictures of Snow Leopards in Kyrgyz Ala-Too Range - Snow Leopard Trust. Press Release, Snow Leopard Trust / Snow Leopard Foundation Kyrgyzstan / Department of Rational Use of Natural Resources, Government of the Kyrgyz Republic Seattle – “We knew that this area had great potential as a snow leopard habitat. 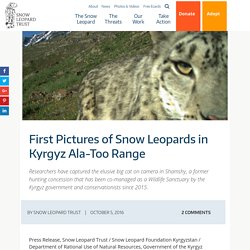 We’ve partnered with the government to establish and manage the Shamshy Wildlife Sanctuary when the opportunity presented itself “, says Kuban Jumabai uulu, Director of the Snow Leopard Foundation Kyrgyzstan, and country program manager for the Snow Leopard Trust. “Earlier this year, we had found snow leopard tracks and scratch marks on several ridgelines in Shamshy. Now, these pictures prove the cat’s presence in the Sanctuary.” Log In or Sign Up. Be inspired by their music, feel the... - Wolf Conservation Center. Log In or Sign Up. Precious World - Caption please. photo credit: Tin Man... Facebook. STOP !!! AND SHARE AROUND THE WORLD.... - Native American Cherokee. Video captures lynx family frolicking along road in Riding Mountain National Park.

Spotting a lynx is a rare sight, but spotting five? 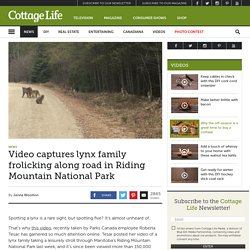 It’s almost unheard of. That’s why this video, recently taken by Parks Canada employee Roberta Tesar, has garnered so much attention online. Tesar posted her video of a lynx family taking a leisurely stroll through Manitoba’s Riding Mountain National Park last week, and it’s since been viewed more than 150,000 times. According to reports, Tesar was driving down a side road not far off Highway 19, which runs through the southern tip of the park, when she spotted the mother lynx. It wasn’t until she stopped her vehicle to get a better look that she realized there was more than one. “Then we noticed two of the kittens, and then a third,” she told CBC News. When she began recording the video, there were three of the wild cats frolicking along the dirt road. Keep Laughing - Lol :P. Hafid Ennaciri - Cuban tody For More Plz Follow us ; join... Log In or Sign Up. Now - So, THIS is why dogs have tails! #adorable. Log In or Sign Up. Log In or Sign Up. Jason the Little Black Bear. 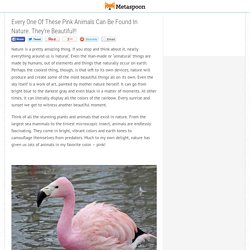 If you stop and think about it, nearly everything around us is ‘natural’. Even the man-made or ‘unnatural’ things are made by humans, out of elements and things that naturally occur on earth. Perhaps the coolest thing, though, is that left to its own devices, nature will produce and create some of the most beautiful things all on its own.

Even the sky itself is a work of art, painted by mother nature herself. It can go from bright blue to the darkest gray and even black in a matter of moments. Think of all the stunning plants and animals that exist in nature. The quintessential pink animal – the pink flamingo. This pink pig is quite possibly the cutest thing ever. This gorgeous pink butterfly seems to prefer beautiful pink flowers. I bet more people would like bugs of they all came in pink. This pink katydid is very rare. This gorgeous creature is a roseate spoonbill. This little bird is a rose finch, named for its rosy coloring. Robin red breast? Bruiser Bear. Salt River Wild Horses - Champ, Wild Stallion Rescues Filly From Drowning.

Metaspoon. If you’ve ever spent some time around horses, I probably don’t need to tell you that they’re incredibly intelligent and loving animals. 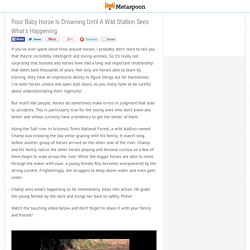 So it’s really not surprising that humans and horses have had a long and important relationship that dates back thousands of years. Not only are horses able to learn by training, they have an impressive ability to figure things out for themselves. I’ve seen horses unlock and open stall doors, so you really have to be careful about underestimating their ingenuity! But much like people, horses do sometimes make errors in judgment that lead to accidents. This is particularly true for the young ones who don’t know any better and whose curiosity have a tendency to get the better of them.

Along the Salt river in Arizona’s Tonto National Forest, a wild stallion named Champ was enjoying the day while grazing with his family. Champ sees what’s happening so he immediately steps into action. Danielle and Kekoa 2. Metaspoon. Have you ever heard of San Ignacio Lagoon? 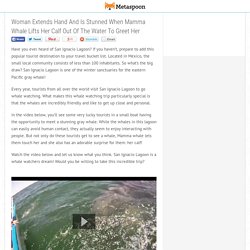 If you haven’t, prepare to add this popular tourist destination to your travel bucket list. Located in Mexico, the small local community consists of less than 100 inhabitants. So what’s the big draw? San Ignacio Lagoon is one of the winter sanctuaries for the eastern Pacific gray whale! Every year, tourists from all over the world visit San Ignacio Lagoon to go whale watching. In the video below, you’ll see some very lucky tourists in a small boat having the opportunity to meet a stunning gray whale. 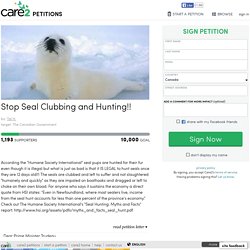