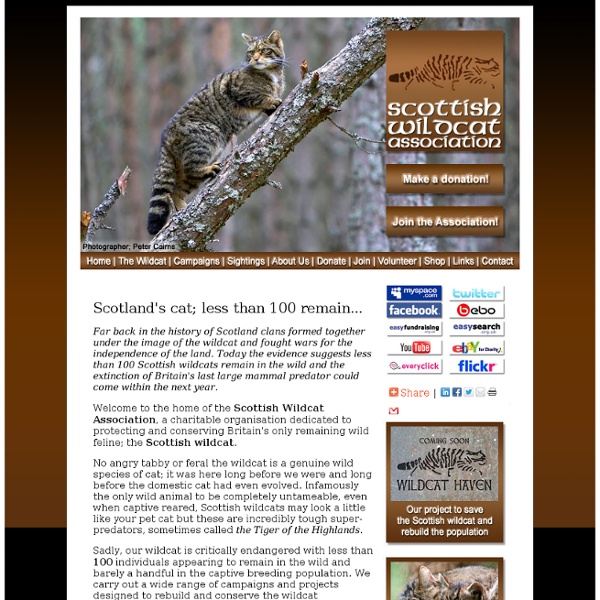 Amur leopard cub is born in Germany The birth of an Amur leopard cub at Germany's Leipzig Zoo is huge news for her species, which is critically endangered. The cub, a female who hasn't yet been named, was born at the zoo in late June. Amur leopards, native to eastern Russia, parts of China and the Korean Peninsula, have been driven nearly to extinction, primarily as a result of habitat loss and fragmentation. Today, it's estimated that fewer than 40 Amur leopards remain in the wild in Russia, and an even smaller number are thought to remain in China. See more photos of the Leipzig Zoo's cub after the jump. RELATED CUTE CUBS: Your morning adorable: Clouded leopard cubs make their debut at Paris zoo Your morning adorable: Lion cubs get a checkup at Israeli zoo -- Lindsay Barnett First, second and fourth photos: Sebastian Willnow / Associated Press Third photo: Hendrik Schmidt / European Pressphoto Agency

Saola Caught in Asia 16 September 2010Last updated at 14:59 By Katia Moskvitch Science reporter, BBC News There may only be a few dozen of Saola left in the wild An extremely rare animal known as the "Asian unicorn" - in spite of having two horns - has been caught by villagers in Laos. No biologist has ever reported seeing the rare Saola in the wild and there are none of them in captivity. The animal was discovered in the forests of South-East Asia as recently as 1992. There have only been a few photos of the Saola taken so far, by villagers and automatic camera traps. The Saola - Pseudoryx nghetinhensis - is believed to inhabit the Annamite Mountains of Laos and Vietnam, and that is where villagers from Laos' central province of Bolikhamxay caught the unfortunate adult male earlier this August. They brought the mammal back to the village. Unfortunate death Surprised by the odd-looking animal, the villagers took a few photos and notified the Lao authorities. New species Not much time

Iberian Lynx, Most Endangered Wild Cat (ENDANGERED SPECIES) Hope for the world’s most endangered wild cat, the Iberian lynx, has arrived! For the first time, scientists have successfully collected and preserved the feline’s embryos which may help save the species. The cat’s declining population is in critical condition with less than 200 accounted for a decade ago. Scientists hope that by preserving the embryos, they may be able to use surrogate mothers from closely related species to boost the Iberian lynx population. Read more about the Iberian lynx and this scientific triumph. — Global Animal The Iberian lynx is the world’s most endangered wild cat. Live Science, Megan Gannon It seems counterintuitive that castration could help save a species facing extinction. Conservationists are hoping the fertilized eggs could be implanted into a surrogate mother of a closely related species, possibly a Eurasian lynx female. More Live Science:

Shocking Study Finds Lions are Nearly Extinct in West Africa Physically and emotionally demanding. That’s how Philipp Henschel, Lion Program Survey Coordinator for the big-cat conservation organization Panthera, describes the six years he and other researchers spent combing the wilds of 17 nations looking for the elusive and rarely studied West African lion. The results of their quest were disheartening to say the least. West African lions—historically referred to as the subspecies Panthera leo senegalensis, although that taxonomic designation is not currently in use—are smaller than and genetically distinct from their southern and eastern African relatives, which are also in decline and currently number about 35,000 big cats. Although shocking, the news of the lions’ near extinction should probably not come as a surprise given the context of the region. Devastating Realization The human encounters also illustrated some of the dangers the lions face (the cats are often killed as pests). But their work was not completely in vain. The Counts

First U.S. Bumblebee Officially Listed as Endangered It’s official: For the first time in the United States, a bumblebee species has been declared endangered. The rusty patched bumblebee (Bombus affinis), once a common sight, is “now balancing precariously on the brink of extinction,” according to the U.S. Fish and Wildlife Service. Once thriving in 28 states and the District of Columbia, but over the past two decades, the bee’s population has plummeted nearly 90 percent. Advocates for the rusty patched bumblebee’s listing are abuzz with relief, but it may be the first skirmish in a grueling conflict over the fate of the Endangered Species Act under the Trump administration. On January 11, the U.S. The delay had been the subject of a tense legal battle: On February 14, the Natural Resources Defense Council filed suit against the U.S. “The Trump administration reversed course and listed the rusty patched bumblebee as an endangered species just in the nick of time. Busy as a Bee First of Many Fights? Some observers are wary of this language.

Cats are going extinct: 12 most endangered feline species Today, May 17th, is Endangered Species Day. We are celebrating it by bringing attention to the diverse and beautiful felid species around the world that are in danger of becoming extinct. The following species are either currently listed as endangered or vulnerable. We hope that by learning about these amazing relatives of our well-loved domestic cats, readers will be encouraged to act to protect these species. First up is the well-known snow leopard. But there are many lesser-known feline species, some that you may never have even heard of before.