Cruising the #polarbear tundra takes trucks with muscle. Meet a driver from @FrontiersNorth. A Pearl of Wisdom a day for #PolarBearWeek and you'll pretty much be a polar bear expert. Photo by Hannah Meinhardt. Morning guest checking out the Tundra Buggy Cam #polarbearcams. Giant armadillos sleep an average of 18 hours a day. We're kicking off #PolarBearWeek with a snapshot contest! Read on to join in the fun. Blue dragonfly. Beautiful Fox - Ivan Kislov. A red squirrel in the snow. #nature. A new mother eats salmon given to her by other members of the family. Beautiful. This is 35,000 Walruses who suddenly all appeared on a coast in Alaska. Snow Leopards. The Big Cat. The Elephant Sanctuary : Hohenwald Tennessee. October 31, 2015 Pumpkin Season at The Sanctuary Ronnie (L) and Minnie In addition to the natural forage available in their Sanctuary habitats, the elephants' diets also include hay, produce, and nutritional supplements provided by Caregivers. 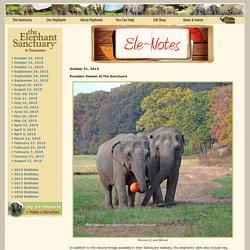 Thanks to the donors who participate in our Feed for A Day and Adopt and Elephant programs, Sanctuary staff are able to provide the elephants with a diverse range of dietary options, and each elephant has her own tastes. Pumpkins, however, seem to be a Sanctuary-wide favorite…and pumpkin season is upon us. Pumpkins with additional dietary treats. Over the past two weeks, pumpkins have been appearing out the habitat…some decorated, some filled with other nutritional supplements…to be discovered by the elephants. The 2016 Calendar, full of photos like the ones you see above, has arrived and is on sale here: Order now while supplies last! Celebrate Owloween with these fun owl facts from @audubonsociety. Owls are intriguing birds that easily capture the attention and curiosity of birders. 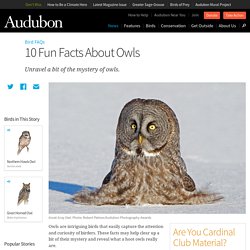 These facts may help clear up a bit of their mystery and reveal what a hoot owls really are. Many owl species have asymmetrical ears. When located at different heights on the owl’s head, their ears are able to pinpoint the location of sounds in multiple dimensions. Ready, aim, strike. The eyes of an owl are not true “eyeballs.” To learn more about these fascinating creatures, download the Audubon Bird Guide: Owls app now free on iTunes. Watch Live as Polar Bears Congregate Waiting for Sea Ice to Form @EcoWatch. 21 Cups Full Of Cuteness. Shagged by a rare parrot - Last Chance To See - BBC Two. Earth - Photography battle: New Zealand v Australia. This weekend two of rugby’s greatest rivals meet in the grand final of the Rugby World Cup: New Zealand and Australia. 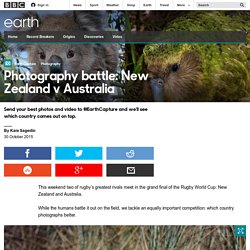 While the humans battle it out on the field, we tackle an equally important competition: which country photographs better. We're seeking your stunning photos and inspiring short films of the natural beauty of Australia and New Zealand. Landscapes, animals, plants: it's up to you. Show us your skills, experiences and celebrate life in these incredible countries.

We will share the best contributions on the BBC Earth website and on Facebook, Instagram and Twitter, where you can share and comment on each other's work using the hashtag #EarthCapture. Earth - See a killer whale mother nursing her calf. Earth - There is a whale longer than any orca, and we missed it. With bodies as long as school buses, you would think that Omura's whales could never go unnoticed. 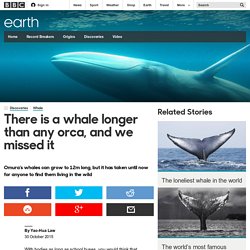 Yet they are among the most mysterious of whales. The species was only given its name, based on dead specimens, in 2003. Since then scientists have failed to find live ones. Now the wait is over. An endearing moment between a polar bear and his furry friend! Baby giraffe. Video: No matter how hard he tries, this clumsy cat can't catch a meal >> Southern Resident killer whale days after being born to a first-time mother. Snowy buffalo. Nature is incredible. #nature. The Big Cat. Two husky buddies. Panda Twins Born At Toronto Zoo. Recently, a panda Er Shun gave birth to two twin cubs at the Toronto Zoo and they were the first pandas to be born in Canada. 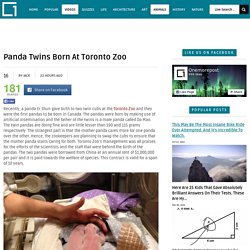 The pandas were born by making use of artificial insemination and the father of the twins is a male panda called Da Mao. The twin pandas are doing fine and are little lesser than 190 and 115 grams respectively. The strangest part is that the mother panda cares more for one panda over the other. Hence, the zookeepers are planning to swap the cubs to ensure that the mother panda starts caring for both. Toronto Zoo’s management was all praises for the efforts of the scientists and the staff that were behind the birth of the pandas. Baby snow monkey making a snowball. Guess who is sleeping besides the filming car. Head in clouds. #EarthOnLocation #giraffe. Jacobin pigeons. Incredible drone footage of a family of orcas. Zebras in South Africa's Hluhluwe Imfolozi Park @AldridgePhoto for #EarthCapture.

Photos du journal - International Wolf Center. Beautiful dog in a beautiful season - GoldilocksAndTheWolf (IG) From caring comes courage. Photo by Yudik Pradnyana. Photographer Accidentally Captures Footage of Whales Swimming Under Northern Lights. Why male orangutans have such weird faces. What you get when you let your puppy pick out a buddy from the shelter. Stingray on the Oceans floor. Reputation: Narwhals are mythical creatures – unicorns of the sea. Mandarin worth photographing. #Birds #Audubon #RSPB #NatGeo #BirdWatching #Animals @BBCEarth. It's Wing Wednesday! Watch a snowy owl mom warm her nest of chicks. "Ignore them, buddy. You're not unlucky." #BlackCatDay. Family drinks together, a lioness and her cubs. Great pic! Giraffe Kisses. Which one is cuter? Rare Blonde Fur Seal Pup. One in a thousand seal pups are born blonde. Elephant affection!

White Gentoo penguin on Bird Island, South Georgia by @_amwphotos #EarthCapture. Huge news! An orca calf was spotted this weekend by @CWROrcas. Learn more and see more pics. Here's some beautiful, intimate footage to welcome you back to #PolarBear season. Earth - Watch a snow leopard chase its prey down a mountainside. The tusks of narwhals are actually teeth that are inside-out. Stunning close-up of a red fox in a meadow! Beautiful! This Funny Octopus Is Acting Strangely... At 0:28 I Nearly Died From Laughing. Swimming Turtle's - Incredible Colours. A Mother's Love by Jacky Parker. Baby Reindeer's! Polar bears are awesome, but the bears of @KatmaiNPS are still out there being incredible. Parachuting Beavers Skydived Over Idaho in the 1950s. There was a time when it rained rodents over rural Idaho. 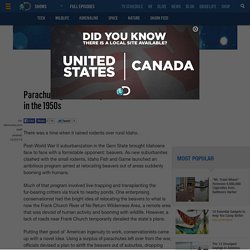 Post-World War II suburbanization in the Gem State brought Idahoans face to face with a formidable opponent: beavers. As new suburbanites clashed with the small rodents, Idaho Fish and Game launched an ambitious program aimed at relocating beavers out of areas suddenly booming with humans. Much of that program involved live-trapping and transplanting the fur-bearing critters via truck to nearby ponds. One enterprising conservationist had the bright idea of relocating the beavers to what is now the Frank Church River of No Return Wilderness Area, a remote area that was devoid of human activity and booming with wildlife. #ScienceSunday . #PolarBears don’t hibernate, but pregnant bears dig dens.

What shapes do you see in these murmurations? Think you know where most of the world's #PolarBears live? See if you're right. Rarely-seen African wild dog by @stephantuengler for @500px. Meet Venus, the Majestic Two-Faced Cat. A weaver bird working on a nest! "Ritualized play-fighting lets young male polar bears practice their moves and size up other bears." - @polarbears. He Is The Most Interesting Cat In The World. Have you seen this cat? 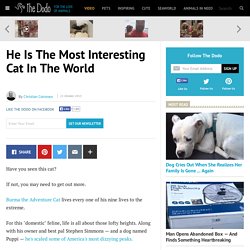 If not, you may need to get out more. Burma the Adventure Cat lives every one of his nine lives to the extreme. For this "domestic" feline, life is all about those lofty heights. Dog Sees A Baby Squirrel And The UNTHINKABLE Happens! I’ve Never Seen A Dog Do This Before. Flocks of starlings, like clouds, can form some interesting patterns. The Baby Fennec Fox - I want one of these for a pet.. □ Snow leopards at risk as Himalayas face #climate change 'crisis' African Cheetah Cub Versus Jack Russell Terrier - Cat & Dog Fight Battle of Will - Cheetah Thug Life. Mother Whale And Dolphin Take Babies Swimming In Remarkable Footage. A recent video shows the incredible moment a mother humpback whale and mother dolphin bring their families together. 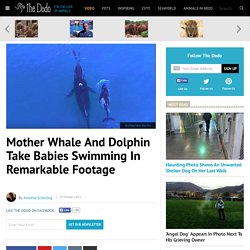 The footage, which was taken from a drone, shows a humpback whale and her calf swimming with a mother dolphin and her calf. Though the humpback pair dwarfs the dolphins, the two families glide peacefully next to each other. It seems to be a conscious decision on the part of the mothers to bring their little families close together; the humpbacks follow closely behind the relaxed dolphins, and at times the mother humpback appears to be just inches away from the dolphin mother's tail.

Despite their size difference, humpbacks and dolphins have formed similar cross-species friendships on several occasions — they've even been spotted playing with each other. You can watch the encounter below. Whale Mom Spotted With The Rarest Thing... They were named "right whales" because they were once considered the right whales to hunt. 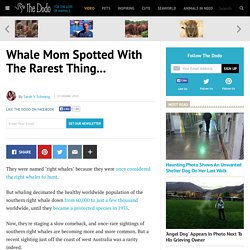 But whaling decimated the healthy worldwide population of the southern right whale down from 60,000 to just a few thousand worldwide, until they became a protected species in 1935. Now, they're staging a slow comeback, and once-rare sightings of southern right whales are becoming more and more common. But a recent sighting just off the coast of west Australia was a rarity indeed.

Shutterstock Drone footage captured by Department of Parks and Wildlife in Australia's Fitzgerald River National Park shows a birds-eye view of a migrating group of southern right whales. Among their dark forms casting shadows as they move across the clear water was a strange white spot. YouTube/Parks and Wildlife WA.

2 hour old Hippo. A baby elephant blows bubbles in this Families of #AfricaCam highlight. Quokka and baby. Rare Pink Dolphin Might Be Pregnant. Pregnancy rumors are swirling around one of the world's few pink bottlenose dolphins. 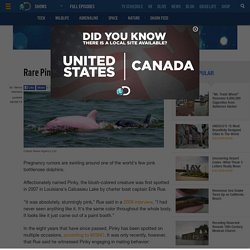 Affectionately named Pinky, the blush-colored creature was first spotted in 2007 in Louisiana's Calcasieu Lake by charter boat captain Erik Rue. "It was absolutely, stunningly pink," Rue said in a 2009 interview. "I had never seen anything like it. It's the same color throughout the whole body. It looks like it just came out of a paint booth.

" In the eight years that have since passed, Pinky has been spotted on multiple occasions, according to WGNO. It's unclear exactly why Pinky is so brilliantly pink. Two other dolphin species -- the Chinese white dolphin (Sousa chinensis) and the Amazon river dolphin (Inia geoffrensis) -- are colloquially known as pink dolphins, although neither species is quite as stunningly pink-hued as Pinky. New Jersey's Walking Bear Mystery Solved. Bear cubs get stuck in tree trunk. Idaho Man's Close Encounter With Bears. BBC Earth (@bbcearth) Bird Asks Sick Bird "What's Wrong?" And Kisses Her. Woman Photographs Black Shelter Cats To Help Them Get Adopted. Black cats are hardly ever adopted and have very high euthanasia rates. With her photography project, Los Angeles based photographer Casey Elise is attempting to display black cat personalities to reverse the opinion that black cats are bad luck and help them get adopted.

“Black cats are awesome and the Los Angeles shelters have plenty available for adoption this Halloween season.” Elise tells BoredPanda. When You See This Dog's Reaction To Dad Returning From War, Your Heart Will Ache. Looking for Polar Bears? They're coming soon! #PolarBearCam. Red Lories. The New Forest National Park, where horses roam freely. Hampshire #England. 1.5 years of trust building exercises went into this photo.