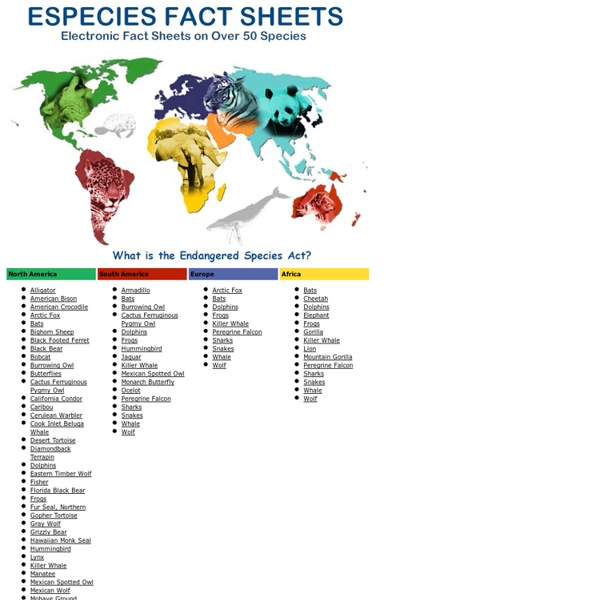 Animals As of July 1, 2013 ThinkQuest has been discontinued. We would like to thank everyone for being a part of the ThinkQuest global community: Students - For your limitless creativity and innovation, which inspires us all. Discover the world's most endangered species Wildscreen's Arkive project was launched in 2003 and grew to become the world's biggest encyclopaedia of life on Earth. With the help of over 7,000 of the world’s best wildlife filmmakers and photographers, conservationists and scientists, Arkive.org featured multi-media fact-files for more than 16,000 endangered species. Freely accessible to everyone, over half a million people every month, from over 200 countries, used Arkive to learn and discover the wonders of the natural world. Since 2013 Wildscreen was unable to raise sufficient funds from trusts, foundations, corporates and individual donors to support the year-round costs of keeping Arkive online. Therefore, the charity had been using its reserves to keep the project online and was unable to fund any dedicated staff to maintain Arkive, let alone future-proof it, for over half a decade.

Earth Floor: Biomes There are many different kinds of plants and animals on the Earth, but only certain kinds are naturally found at any particular place. (We are not counting zoos here!) For example, cacti are found in the desert, polar bears are found in the Arctic, and elephants are found in central Africa and India. So, why don't people living in south Texas have to be on the lookout for snow leopards, or why don't kids in Minnesota have to worry about finding giant boa constrictors in their back yards? It is because these animals are not adapted to live in the average weather conditions found in Texas or Minnesota. These average weather conditions, such as the range of temperature and rainfall that typically occur in a particular location like Minnesota, are called the climate of that location.

Food Chain - Kid's Corner The Food Chain Every living thing needs energy in order to live. Everytime animals do something (run, jump) they use energy to do so. Animals get energy from the food they eat, and all living things get energy from food. Plants use sunlight, water and nutrients to get energy (in a process called photosynthesis). Energy is necessary for living beings to grow. Dresden Elbe Valley Germany Dresden Elbe Valley, Germany In Dresden Elbe Valley, Germany there is much diversity in the wildlife and landscape. There are many factors which contribute to the variety of life forms in this area including the landscape itself. Since there are forests, mountains and water, multiple types of wildlife may have habitat here. The vast tracts of forest and mountainous terrain, with only scattered habitation, contribute to a surprising variety of wildlife. Game animals abound in most regions several varieties of deer, quail, and pheasant and, in the Alpine regions, the chamois and ibex and their numbers are protected by stringent game laws. The wild boar population, which soared after World War II because of restrictions on hunting, has now been reduced so that it no longer represents a danger to people or crops.

Start WorldBiomes.com - Explore Five of the World's Main Biomes Camoflauge in Animals Mimicry Some animals and plants look like other things -- they mimic them. Mimicry is another type of deceptive coloration. It can protect the mimic from predators or hide the mimic from prey. If mimicry was a play, there would be three characters. Rainforest Animals