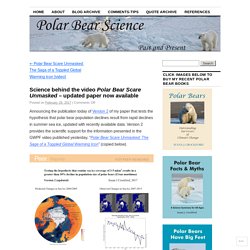 Version 2 provides the scientific support for the information presented in the GWPF video published yesterday, “Polar Bear Scare Unmasked: The Sage of a Toppled Global Warming Icon” (copied below). [The graphic above was created by me from the title page and two figures from the paper] Crockford, S.J. 2017 V2. Testing the hypothesis that routine sea ice coverage of 3-5 mkm2 results in a greater than 30% decline in population size of polar bears (Ursus maritimus). PeerJ Preprints 28 February 2017. Version 2, published 28 February, incorporates additional reviewer comments and suggestions received on Version 1, as well as the updates noted above. 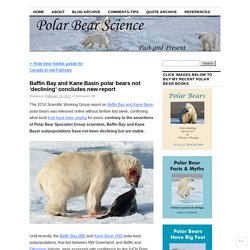 Until recently, the Baffin Bay (BB) and Kane Basin (KB) polar bear subpopulations, that live between NW Greenland, and Baffin and Ellesmere Islands, were assessed with confidence by the IUCN Polar Bear Specialist Group (PBSG) to be declining due to suspected over-hunting (see 2016 Report, Ch. 1, pg. 4). It turns out they were wrong.

Polar bear science – past and present. Study: Predictions of polar bear extinction based on bad science. Predictions that global warming would wipe out polar bears are based on “scientifically unsound” computer models, according to a new study by a veteran zoologist at the University of Victoria. 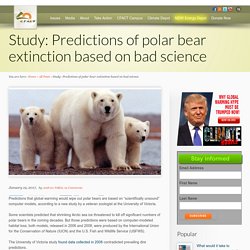 Some scientists predicted that shrinking Arctic sea ice threatened to kill off significant numbers of polar bears in the coming decades. But those predictions were based on computer-modeled habitat loss; both models, released in 2006 and 2008, were produced by the International Union for the Conservation of Nature (IUCN) and the U.S. Fish and Wildlife Service (USFWS). The University of Victoria study found data collected in 2008 contradicted prevailing dire predictions.

“Those mid-2000s survival assessments predicted significant population declines of polar bears would result by mid-century as a consequence of summer sea ice extent reaching approximately 3-5 mkm2 on a regular basis,” zoologist Dr. Polar Bears Survived Periods When The Arctic Had No Ice. Former Vice President Al Gore shocked Americans in “An Inconvenient Truth” when he said polar bears were drowning because global warming was melting Arctic sea ice, but now a new study shows that polar bears did just fine even when there was no ice covering the Arctic. 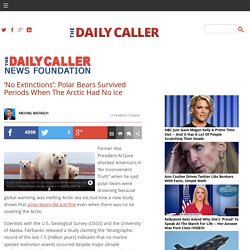 Scientists with the U.S. Geological Survey (USGS) and the University of Alaska, Fairbanks released a study claiming the “stratigraphic record of the last 1.5 [million years] indicates that no marine species’ extinction events occurred despite major climate oscillations,” including periods where the Arctic was completely ice-free in summertime. It’s official! You can stop worrying about “climate change” effects on the polar bears, seals, and walrus – they’ve seen it all before, including ice-free summers. 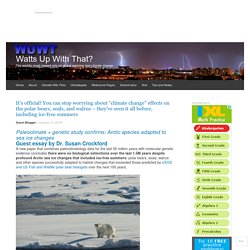 Susan Crockford A new paper that combines paleoclimatology data for the last 56 million years with molecular genetic evidence concludes there were no biological extinctions over the last 1.5M years despite profound Arctic sea ice changes that included ice-free summers: polar bears, seals, walrus and other species successfully adapted to habitat changes that exceeded those predicted by USGS and US Fish and Wildlife polar bear biologists over the next 100 years. Cronin, T. M. and Cronin, M.A. 2015. Thomas Cronin is a USGS paleoclimatologist at the Eastern Geology and Paleoclimate Science Center, and Matthew Cronin is a molecular geneticist at the University of Alaska Fairbanks (see previous postshere and here about Matt’s work on the genetics of polar bear evolution). From the Abstract: One-sided science ignores the fact that ‘Sea ice is not a stable habitat for polar bears’ Guest essay by Dr. 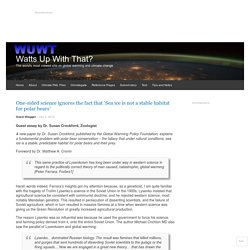 Susan Crockford, Zoologist A new paper by Dr. Susan Crockford, published by the Global Warming Policy Foundation, explains a fundamental problem with polar bear conservation – the fallacy that under natural conditions, sea ice is a stable, predictable habitat for polar bears and their prey. Foreword by Dr. Matthew A. This same practice of Lysenkoism has long been under way in western science in regard to the politically correct theory of man caused, catastrophic, global warming. Harsh words indeed. The reason Lysenko was so influential was because he used the government to force his science, and farming policy derived from it, onto the entire Soviet Union. Lysenko.. .dominated Russian biology. Ferrara and Crichton believe that global warming has now become a politicized science similar to Lysenkoism, in which dissenting views are not allowed. Coke’s WWF cash machine. White Coke Cans Fund Polar Bear Myths Guest post by by Paul Chesser For years Coca-Cola has given millions of dollars to eco-extreme group World Wildlife Fund, whose alarmism and perpetration of falsehoods are unmatched among its cohorts in climate activism. 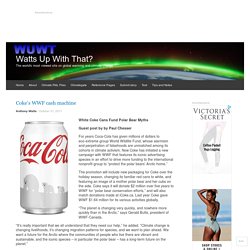 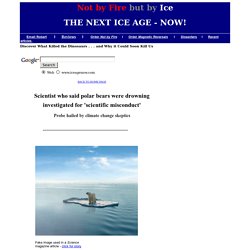 Although it is unclear what the allegations are, a US government watchdog group representing Monnett says investigators are focused on observations of bears he and researcher Jeffrey Gleason made in 2004. Just five years ago, Dr Charles Monnett, a federal wildlife biologist working in Alaska, stunned the world after spotting four polar bear bodies floating in the sea miles from shore. As Polar Bear Populations Fail To Decline, Message Of Doom Intensifies. In turns out that polar bears are much more resilient to changing levels of sea ice than data collectors assume and the proof is in the current healthy populations everywhere. 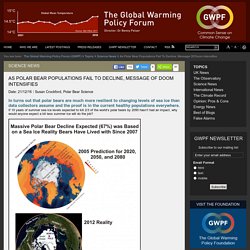 If 10 years of summer sea ice levels expected to kill 2/3 of the world’s polar bears by 2050 hasn’t had an impact, why would anyone expect a bit less summer ice will do the job? The more the polar bears fail to die in droves, the shriller the message from activist polar bear researchers – via willing media megaphones – that the great death of the bears will soon be upon us, just you wait and see! Some big media guns were out this past week spreading the prophesy of doom fed to them by the polar bear researchers most committed to the “threatened with extinction” narrative: The New York Times, The Atlantic, The Guardian.

The desperation is becoming palpable as the public catches on to their epic failure. But nothing of the kind happened. Zoologist: U.S. Polar bear Survival Plan is 'fake news' - Principia Scientific International. Published on Written by Thomas Richard U.S. wildlife releases a plan to protect polar bears from global warming, despite their numbers doubling over 50 years. 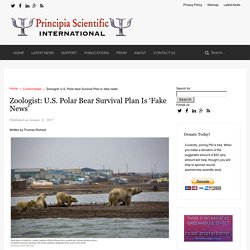 Has recent summer sea ice loss caused polar bear populations to crash? Press Release 19 January 2017 FROM: Dr. Susan J. Crockford, University of Victoria, Canada A paper published today finds that predictions of polar bear population crashes due to summer sea ice loss are based on a scientifically unfounded assumption. Specifically, the paper addresses the basic premise upon which predicted population declines linked to modeled habitat loss were made by polar bear specialists back in 2006 and 2008 (by the International Union for the Conservation of Nature, IUCN, and the US Fish and Wildlife Service, USFWS), and concludes that when assessed as a testable hypothesis against data collected since then, it must be rejected.

Photo credit: US Fish and Wildlife Service (2007). Image credit: US Geological Survey. But summer sea ice declined much faster than anyone expected. Image credit: Figures 2 and 5 from Crockford 2017. Biological response to climate change in the Arctic Ocean: the view from the past. In the case of Arctic climate change, the divergence time of polar bears (Ursus maritimus) and its sister species, brown bears (U. arctos), is especially relevant because there is concern about reduced summer sea ice habitat, especially for some geographic populations [3, 4, 54, 185]. Polar bears and brown bears are thought to have evolved from a common ancestor during the Pleistocene [111], and a polar bear fossil from the last interglacial (Eemian) period ~125 ka established this age as their minimum time of divergence [2, 88, 114]. Molecular clock estimates of the divergence time of polar bears and brown bears vary widely depending on the genes used.

Polar bears out on the sea ice eat few seals in summer and early fall. Even back in the 1970s, polar bears that spent the summer and early fall on the sea ice did not eat very often and some probably didn’t eat at all This is a polar bear with an adult hooded seal, which make up an increasing share of their food. The hooded seal can weigh up to 300-400 kg, so it is a large prey for the approximately 500 kg heavy polar bear. Credit: Rune Dietz, Aarhus University. An inconvenient truth.