The 5 Creepiest Serial Killers (Who Were Animals) Fatal animal attacks on humans are so rare that it makes a movie like Jaws seem almost criminal. 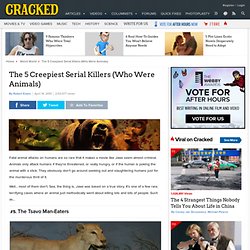 Animals only attack humans if they're threatened, or really hungry, or if the human is poking the animal with a stick. They obviously don't go around seeking out and slaughtering humans just for the murderous thrill of it. Well... most of them don't. See, the thing is, Jaws was based on a true story. It's one of a few rare, terrifying cases where an animal just methodically went about killing lots and lots of people. The Time: The Place: A 1,000 mile long stretch of track that cut across British East Africa called the Kenya-Uganda Railway. England: Granted, we were always hard on animals, particularly those that lived in tribes. The Story: The problem with killing a bunch of dead natives other than the obvious permanent scarring on your soul and the potential for getting haunted by the guy from Poltergeist, is the animals.

The future can't come quickly enough. How They Killed: Fastfood Meals for Failures. If you're anything like me, absolutely everything that you see, smell and feel is a chilling reminder that this Earth is a cold, unfeeling timebomb that will go off at any moment. 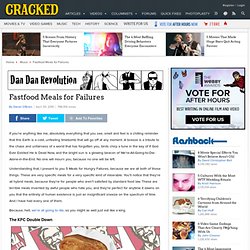 5 Cheap Magic Tricks Behind Every Psychic. I got into magic at the age of five. 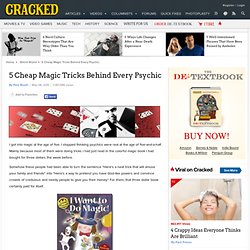 I stopped thinking psychics were real at the age of five-and-a-half. Mainly because most of them were doing tricks I had just read in the colorful magic book I had bought for three dollars the week before. Somehow these people had been able to turn the sentence "Here's a neat trick that will amuse your family and friends" into "Here's a way to pretend you have God-like powers and convince crowds of credulous and needy people to give you their money. " For them, that three dollar book certainly paid for itself. If you want to follow their lead, allow me to present five things you must do if you want to use your cheap magician skills to convince the world you have real psychic powers.

6 Awards That Would Actually Make The Oscars Worth Watching. Yeah, we get that the Oscars are already way too long. 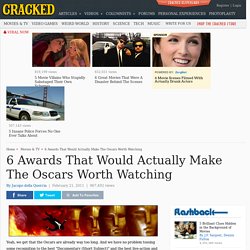 And we have no problem tossing some recognition to the best "Documentary (Short Subject)" and the best live-action and animated short films. We just don't think they should be televised. Nobody's seen any of the movies. Meanwhile, some of the greatest moments ever captured on film haven't gotten so much as a validated parking ticket from the Academy. Why? #6. Stuntmen have been lobbying for the past 20 years to be eligible for their own Oscars, which frankly is a small thing to ask for in exchange for what these guys regularly risk so we can enjoy action movies and sequels to raunchy comedies.

Stuntman Wayne Michaels made that 750 foot jump, and he broke a world record for highest bungee jump doing it. As for some of the greatest stunts ever pulled off in cinematic history, few compare to the chariot race in Ben-Hur. Fast-forward to 4:43. The 6 Ballsiest Inventors Of All Time. #3. 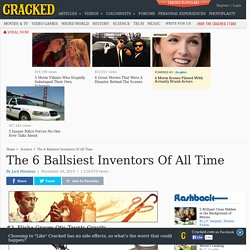 Elisha Graves Otis Taunts Gravity Elisha Otis was an engineer in a time when the job description for the position was "dude who disassembles old machines. " As such, he found himself with the job of converting an old mill to a factory, a position made significantly more exciting by the fact that the only way to clear the upper floors was by using a system of hoisting platforms.

We said this was exciting because back in 1851, hoisting platforms was about as safe as trying to insert contacts into the eyes of an angry bear. "This seems like a terrible idea. " After having to dodge certain death every few days, Otis decided enough was enough, but instead of quitting and becoming a street sweeper, he invented the world's first automatic braking system.

7 Celebrities Who Had Badass Careers You Didn't Know About. #3. 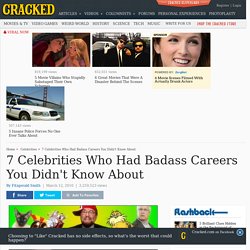 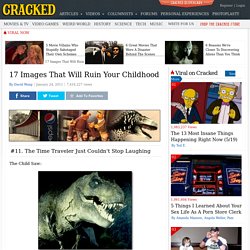 The Time Traveler Just Couldn't Stop Laughing The Child Saw: Jurassic Park brought dinosaur mania back so hard that it hasn't completely dissipated 17 years later. The 5 Most Half Assed Apologies for Historic Crimes. Apologies are so difficult that some people manage to go pretty much their whole lives without ever offering them. 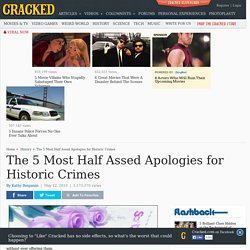 But when you're a government and you need popular opinion on your side, a good apology can pay off in spades. But since most governments are also douchebags, they never want to apologize too much. So there's kind of a delicate balance there that almost always yields thoroughly ridiculous results. #5. America Apologizes for Japanese Internment, Barely Two months after the Japanese bombed Pearl Harbor, FDR signed Executive Order 9066 forcing every single one of the more than 100,000 Japanese-Americans on the West Coast of the United States into internment camps.

The winner gets a writ of Habeas corpus! More than two thirds of the people interned were full-fledged U.S. citizens, ripped from their jobs and their homes and forced to leave virtually everything they owned behind.