Climate Change Could Harm Penguins and Polar Bears. In the Arctic, hungry polar bears, unable to sustain themselves on the melting ice, are increasingly making their way inland to such towns as Noorvik, Alaska, and Churchill, Manitoba, where they sniff out garbage bins and scavenge for dinner. 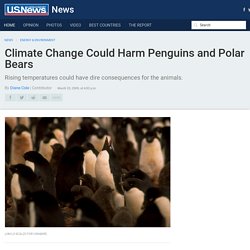 And in the Antarctic, wet baby penguin chicks shiver in the rain; warming temperatures mean less snow but more rain, which soaks them through, putting them at risk of freezing to death. These are the consequences of climate change, scientists say. Polar bears and penguins may live poles apart, with the great white mammals ruling the Arctic areas near the North Pole and the best-known penguin varieties inhabiting the southernmost regions of the globe, in or near Antarctica. But they both depend on ice and cold for survival—a problem in a world that's warming and where temperature increases are most pronounced at the planet's northern and southern extremes. "They don't share the same areas, [but] they share the same problems," says P. Penguins starving due to climate change - Technology & Science. Falling populations of penguins in the West Antarctic Peninsula are being driven by a reduction of their main food source, Antarctic krill, according to a new study. 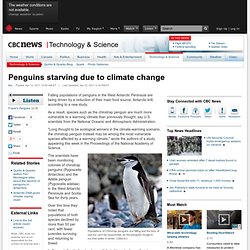 As a result, species such as the chinstrap penguin are much more vulnerable to a warming climate than previously thought, say U.S. scientists from the National Oceanic and Atmospheric Administration. Penguin Decline in Antarctica Linked With Climate Change. By John Roachfor National Geographic News May 9, 2001 Emperor penguins like it cold. 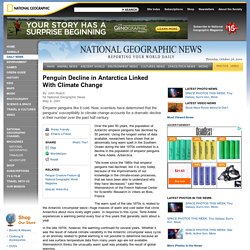 Climate change may be GOOD news for penguins in Antarctica. Melting ice caps and shrinking glaciers are often seen as a negative side effect of global warming, but at least one species is benefiting from these changes in temperature. 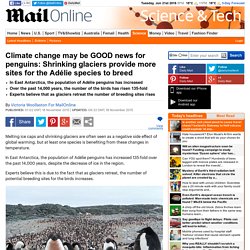 Climate Change Influences on Antarctic Bird Populations. Killer Whales and Global Warming - Killer Whale Facts and Information. The consequences and effects of global warming have reached most of the species on earth, including us of course. 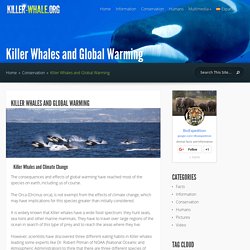 The Orca (Orcinus orca), is not exempt from the effects of climate change, which may have implications for this species greater than initially considered. It is widely known that Killer whales have a wide food spectrum; they hunt seals, sea lions and other marine mammals. They have to travel over large regions of the ocean in search of this type of prey and to reach the areas where they live. However, scientists have discovered three different eating habits in Killer whales leading some experts like Dr. Robert Pitman of NOAA (National Oceanic and Atmospheric Administration) to think that there are three different species of Orcas. Dr. If these three types of whales are three different species or are only in the way to becoming separate species, yet is not fully agreed by the scientific community, but they already consider these three types of Killer whales.

Global Warming Makes Elephant Seals Dive Deeper, Study Suggests. Lumbering elephant seals in Antarctica seem to be taking the heat from global warming, as scientists have found the mammals must dive to deeper than normal depths in warmer seas to snag food. 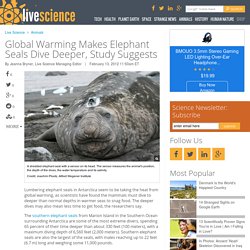 The deeper dives may also mean less time to get food, the researchers say. What leopard seals can tell us about the health of the planet. By Richard North 11 July 2006 Around the ice floes of Antarctica, the leopard seal is king: top of the food chain, an efficient killer with no natural predators, untroubled even by man. 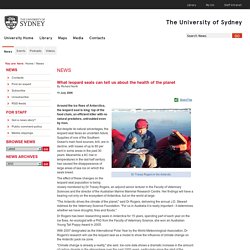 But despite its natural advantages, the leopard seal faces an uncertain future. Humpback Whales Reluctant to Migrate from Antarctica. Humpback whales spend their summers in Antarctica chowing down on shrimplike krill. 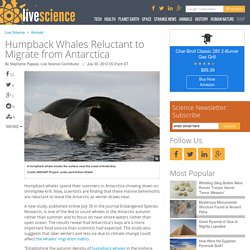 Now, scientists are finding that these marine behemoths are reluctant to leave the Antarctic as winter draws near. A new study, published online July 30 in the journal Endangered Species Research, is one of the few to count whales in the Antarctic autumn rather than summer and to focus on near-shore waters rather than open ocean. The results reveal that Antarctica's bays are a more important food source than scientists had expected. The study also suggests that later winters and less ice due to climate change could affect the whales' migration habits.

Wildlife in Antarctica. Summer is in full swing with penguin chicks hatching all fluffy and grey, you'll see them earlier in the South Shetland Islands and later in the month to the south of the Peninsula. 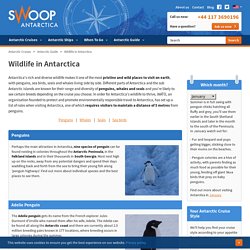 In January watch out for: - Fur and leopard seal pups getting bigger, sticking close to their mums on the beaches. - Penguin colonies are a hive of activity, with parents finding as much food as possible for their young, fending off giant Skua birds that prey on baby penguins. Find out more about visiting Antarctica in January February is still summertime and the continuously receding ice means that ice breakers can explore further south, visiting the Antarctic Peninsula and Weddell Sea.

. - Young penguin chicks are starting to get strong and big and can be seen huddling in 'penguin creches'. Climate Change To Shrink Animal And Plant Habitats Dramatically, Study Forecasts. * More than half of all plants, a third of animals at risk-study * Rapid peak in greenhouse gas emissions could reduce impacts By Environment Correspondent Alister Doyle OSLO, May 12 (Reuters) - The habitats of many common plants and animals will shrink dramatically this century unless governments act quickly to cut rising greenhouse gas emissions, scientists said on Sunday after studying 50,000 species around the world. 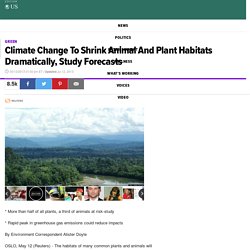 The scientists from Britain, Australia and Colombia said plants, amphibians and reptiles were most vulnerable as global temperatures rise and rainfall patterns change. About 57 percent of plants and 34 percent of animal species were likely to lose more than half the area with a climate suited to them by the 2080s if nothing was done to limit emissions from power plants, factories and vehicles, they wrote in the journal Nature Climate Change. Impacts of climate change - Discovering Antarctica.

Penguins and Global Warming - Penguin Facts and Information. Penguins and Global Warming Even penguins are affected by the climate change that takes place out there. Due to global warming around the world, their natural environment is affected. Those species that live in the extremely cold regions depend on the ice because it is what they walk on. When it is melting at fast rates it completely changes their natural environment. Unhappy Feet: Global Warming Threatens Emperor Penguins. The biggest threat to emperor penguins may not be leopard seals or even killer whales, but a much larger predator: global warming.

At both locations, the beguiling birds face an uncertain future. Antarctic wildlife - British Antarctic Survey. Antarctica, the Effects of Global Warming. The polar regions are particularly sensitive to small rises in the annual average temperature, they are sometimes referred to as "the canary in the coalmine" in that they show changes long before they can be seen elsewhere in the world. The mean annual air temperature of the Antarctic Peninsula has increased by nearly 3°C in the region in the last 50 years, the only comparable regions are in the Arctic. The temperature of the rest of Antarctica shows indications of rising at a slower rate. The situation in Antarctica is being assessed constantly and changes that may have already occurred (such as with the WAIS ice sheet - below) are being discovered. New research is being carried out, new things found and understanding is improving. For the foreseeable future, global warming in Antarctica is likely to be a fairly lively topic, for the latest news try here.

Summary points of this page: