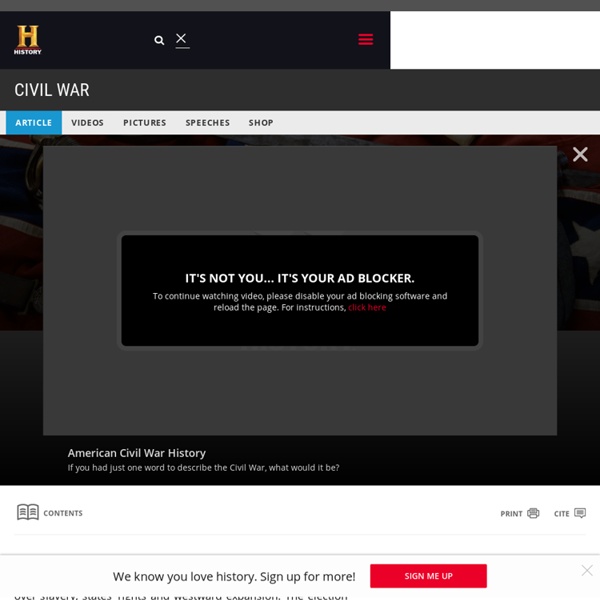 In the mid-19th century, while the United States was experiencing an era of tremendous growth, a fundamental economic difference existed between the country’s northern and southern regions. In the North, manufacturing and industry was well established, and agriculture was mostly limited to small-scale farms, while the South’s economy was based on a system of large-scale farming that depended on the labor of black slaves to grow certain crops, especially cotton and tobacco. Growing abolitionist sentiment in the North after the 1830s and northern opposition to slavery’s extension into the new western territories led many southerners to fear that the existence of slavery in america—and thus the backbone of their economy—was in danger. In 1854, the U.S. Congress passed the Kansas-Nebraska Act, which essentially opened all new territories to slavery by asserting the rule of popular sovereignty over congressional edict.

History, Definition, Crisis, & Facts Secession, in U.S. history, the withdrawal of 11 slave states (states in which slaveholding was legal) from the Union during 1860–61 following the election of Abraham Lincoln as president. Secession precipitated the American Civil War. Britannica Quiz Civil War Audio What is a TV provider? A TV service provider is the company you pay for your television service. It could be a cable company, a satellite company or a telecommunications company. Why am I being asked to sign in with a TV provider to watch certain video content? TV service providers play a key role in delivering our content.

Summary, Map, & Significance Missouri Compromise, (1820), in U.S. history, measure worked out between the North and the South and passed by the U.S. Congress that allowed for admission of Missouri as the 24th state (1821). It marked the beginning of the prolonged sectional conflict over the extension of slavery that led to the American Civil War. Britannica Quiz Journey Around the World Where did the first Montessori school begin? Fort Sumter National Monument Fort Sumter National Monument, historic site preserving Fort Sumter, location of the first engagement of the American Civil War (April 12, 1861). Fort Sumter was designed as part of the defensive system protecting Charleston, South Carolina. Its origin stemmed partly from the 1812 war with Great Britain, which had highlighted how vulnerable the coastline and harbours were to foreign attack. Britannica Quiz

Confederate general P.G.T. Beauregard, in full Pierre Gustave Toutant Beauregard, (born May 28, 1818, near New Orleans, Louisiana, U.S.—died February 20, 1893, New Orleans), Confederate general in the American Civil War. Britannica Quiz Franklin Pierce Franklin Pierce, byname Young Hickory, (born November 23, 1804, Hillsboro, New Hampshire, U.S.—died October 8, 1869, Concord, New Hampshire), 14th president of the United States (1853–57). He failed to deal effectively with the corroding sectional controversy over slavery in the decade preceding the American Civil War (1861–65). United States history Black Hawk War, brief but bloody war from April to August 1832 between the United States and Native Americans led by Black Hawk (Ma-ka-tai-me-she-kia-kiak), a 65-year-old Sauk warrior who in early April led some 1,000 Sauk, Fox, and Kickapoo men, women, and children, including about 500 warriors, across the Mississippi River to reclaim land in Illinois that tribal spokesmen had surrendered to the U.S. in 1804. The band’s crossing back into Illinois spurred fear and anger among white settlers, and eventually a force of some 7,000 mobilized against them—including members of the U.S. Army, state militias, and warriors from various other Indian peoples. Some 450–600 Indians and 70 soldiers and settlers were killed during the war. By 1837 all surrounding tribes had fled to the West, leaving most of the former Northwest Territory to white settlement.

United States politician and military officer Benjamin F. Butler, in full Benjamin Franklin Butler, (born Nov. 5, 1818, Deerfield, N.H., U.S.—died Jan. 11, 1893, Washington, D.C.), American politician and army officer during the American Civil War (1861–65) who championed the rights of workers and black people. Britannica Quiz Confederate States of America unrecognized breakaway state in North America from 1861 to 1865 The Confederate States of America (CSA), commonly referred to as the Confederate States or the Confederacy, was an unrecognized breakaway state[1] in existence from February 8, 1861 to May 9, 1865, that fought against the United States of America during the American Civil War.[2][3] Before Lincoln took office on March 4, 1861, a provisional Confederate government was established on February 8, 1861. It was considered illegal by the United States federal government, and many Northerners thought of the Confederates as traitors. After war began in April, four slave states of the Upper South—Virginia, Arkansas, Tennessee, and North Carolina—also seceded and joined the Confederacy.

All Confederate soldiers gain presidential pardons, Dec. 25, 1868 In the aftermath of the Civil War, President Andrew Johnson on this day in 1868 issued pardons to all Confederate soldiers who fought in that conflict. The president extended “unconditionally, and without reservation ... a full pardon and amnesty for the offence [sic] of treason against the United States, or of adhering to their enemies during the late Civil War, with restoration of all rights, privileges, and immunities under the Constitution and the laws.” In his Christmas Day Proclamation, Johnson said his action would “renew and fully restore confidence and fraternal feeling among the whole, and their respect for and attachment to the national [e.g., federal] government, designed by its patriotic founders for the general good.” As the vice president, Johnson, a Tennessee Democrat, had succeeded the assassinated Abraham Lincoln to the presidency shortly after the Union victory. SOURCE: “This Day in Presidential History,” by Paul Brandus (2018)

Kansas-Nebraska Act - Definition, Date & Significance The Kansas-Nebraska Act was an 1854 bill that mandated “popular sovereignty”–allowing settlers of a territory to decide whether slavery would be allowed within a new state’s borders. Proposed by Stephen A. Douglas–Abraham Lincoln’s opponent in the influential Lincoln-Douglas debates–the bill overturned the Missouri Compromise’s use of latitude as the boundary between slave and free territory. Battle of Antietam The Battle of Antietam, also called the Battle of Sharpsburg, occurred on September 17, 1862, at Antietam Creek near Sharpsburg, Maryland. It pitted Confederate General Robert E. Lee’s Army of Northern Virginia against Union General George McClellan’s Army of the Potomac and was the culmination of Lee’s attempt to invade the north. The battle’s outcome would be vital to shaping America’s future, and it remains the deadliest one-day battle in all of American military history. The Significance of the Battle of Antietam There was a lot at stake for the Battle of Antietam.