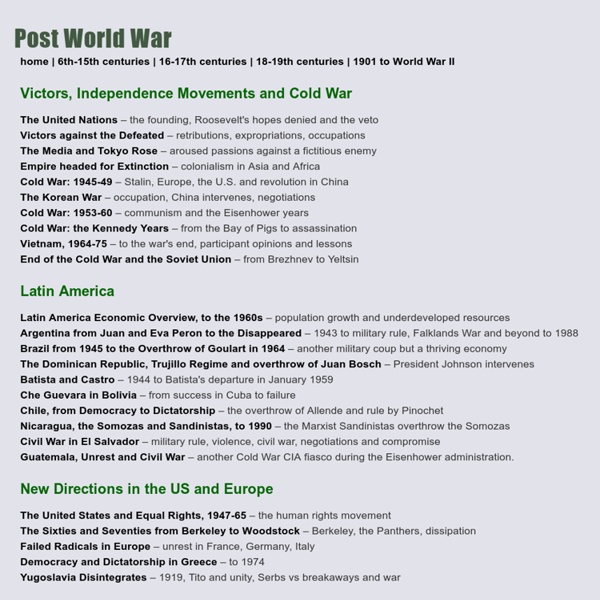 home | 6th-15th centuries | 16-17th centuries | 18-19th centuries | 1901 to World War II Victors, Independence Movements and Cold War The United Nations – the founding, Roosevelt's hopes denied and the veto Victors against the Defeated – retributions, expropriations, occupations The Media and Tokyo Rose – aroused passions against a fictitious enemy Empire headed for Extinction – colonialism in Asia and Africa Cold War: 1945-49 – Stalin, Europe, the U.S. and revolution in China The Korean War – occupation, China intervenes, negotiations Cold War: 1953-60 – communism and the Eisenhower years Cold War: the Kennedy Years – from the Bay of Pigs to assassination Vietnam, 1964-75 – to the war's end, participant opinions and lessons End of the Cold War and the Soviet Union – from Brezhnev to Yeltsin Latin America Latin America Economic Overview, to the 1960s – population growth and underdeveloped resources Brazil from 1945 to the Overthrow of Goulart in 1964 – another military coup but a thriving economy

Teacher Guide - George Washington: A National Treasure This Teacher Resource Guide is designed for incorporation into history and social studies curricula. It will introduce your students to some of the events and issues that shaped George Washington’s life. The activities should enhance your students’ knowledge of Washington and expand their horizons about this complex and interesting man. Each activity includes suggested objectives, procedures, related standards in historical thinking, worksheets, and other supplemental materials. The FREE education kit, which included the 19 1/4" x 31" full-color museum quality poster reproduction of the “Lansdowne” portrait is no longer available.

Extended Standards 99 Mind Mapping Resources, Tools, and Tips So, there you are staring at that black sheet of paper again. Or perhaps it's a black Word document on your computer screen. Whichever it may be, it's obvious you're about to take notes for that big essay assignment or group project, and you're not too excited about getting started! That's where a different kind of note taking comes in to play, one that is actually fun to do and will also help you to understand your notes better. It's a technique called mind mapping, and is based around a strong visual method of taking notes. Free Software Free Mind - the premier java-based mind mapping software known for its quick, one-click "fold/unfold" and "follow link" operations. Wisemapping - "Visual Thinking Evolution", offering free web based mind maps you can share anywhere on the web. Mindplan - mind mapping and project management combined with Lotus Notes. Mindomo - an online mapping application offering both free and paid premium accounts. Resources Professional Training In the News Books E-Books

Salem Witchcraft: the Events and Causes of the Salem Witch Trials By Tim Sutter © 2000-2003 What caused the Salem witch trials of 1692? This question has been asked for over 300 years. Although it is a simple question, it does not have an easy answer. Salem Politics Salem Village had a very colorful history before the famous witch trials. Many of the Salem Village farming families believed that Salem Town’s thriving economy made it too individualistic. The Putnams were the leaders of the separatist group primarily because they owned the most farmland in Salem Village. Contracts for ministers during this period often provided them with a modest salary, use of a house, and free firewood. In October of 1691 a new Salem Village Committee was elected that was comprised mostly of Parris’ opponents. Cold Winter Days The Rev. After chores were done, there was little entertainment for Betty and Abigail. Reading was a popular pastime during the winter months. Betty Parris, her cousin Abigail Williams, and two other friends formed such a circle. Salem Witchcraft

Theodore Roosevelt's Corollary to the Monroe Doctrine (1905) In his annual messages to Congress in 1904 and 1905, President Theodore Roosevelt expanded the Monroe Doctrine. The corollary stated that not only were the nations of the Western Hemisphere not open to colonization by European powers, but that the United States had the responsibility to preserve order and protect life and property in those countries. European intervention in Latin America (see the Platt Amendment) resurfaced as an issue in U.S. foreign policy when European governments began to use force to pressure several Latin American countries to repay their debts. For example, British, German, and Italian gunboats blockaded Venezuela’s ports in 1902 when the Venezuelan government defaulted on its debts to foreign bondholders. Many Americans worried that European intervention in Latin America would undermine their country’s traditional dominance in the region. To keep other powers out and ensure financial solvency, President Theodore Roosevelt issued his corollary.

The 1920's - Roaring Twenties - The Nineteen Twenties in History Projects As of July 1, 2013 ThinkQuest has been discontinued. We would like to thank everyone for being a part of the ThinkQuest global community: Students - For your limitless creativity and innovation, which inspires us all. Teachers - For your passion in guiding students on their quest. Partners - For your unwavering support and evangelism. Parents - For supporting the use of technology not only as an instrument of learning, but as a means of creating knowledge. We encourage everyone to continue to “Think, Create and Collaborate,” unleashing the power of technology to teach, share, and inspire. Best wishes, The Oracle Education Foundation

Remembering Pearl Harbor: The USS Arizona Memorial Today the battle-scarred, submerged remains of the battleship USS Arizona rest on the silt of Pearl Harbor, just as they settled on December 7, 1941. The ship was one of many casualties from the deadly attack by the Japanese on a quiet Sunday that President Franklin Roosevelt called "a date which will live in infamy." The Arizona's burning bridge and listing mast and superstructure were photographed in the aftermath of the Japanese attack, and news of her sinking was emblazoned on the front page of newspapers across the land. The photograph symbolized the destruction of the United States Pacific Fleet at Pearl Harbor and the start of a war that was to take many thousands of American lives. Indelibly impressed into the national memory, the image could be recalled by most Americans when they heard the battle cry, "Remember Pearl Harbor." More than a million people visit the USS Arizona Memorial each year.

Prove It!: A Citation Scavenger Hunt Lesson Plan Preview “Prove it!” is a common phrase heard from many teachers to their students during the research and writing process. back to top Citation Hunt Printout: Use this printable resource to guide students and aid them in recording their citations. Teaching and practicing the appropriate use of citations in research should be taught early and often during one's academic career. DeSena, Laura Hennessey. 2007. Hobbs, Renee. Standards Students read a wide range of print and nonprint texts to build an understanding of texts, of themselves, and of the cultures of the United States and the world; to acquire new information; to respond to the needs and demands of society and the workplace; and for personal fulfillment. Students apply a wide range of strategies to comprehend, interpret, evaluate, and appreciate texts. Resources & Preparation Instructional Plan Students will: Session One