The Black Past: Remembered and Reclaimed 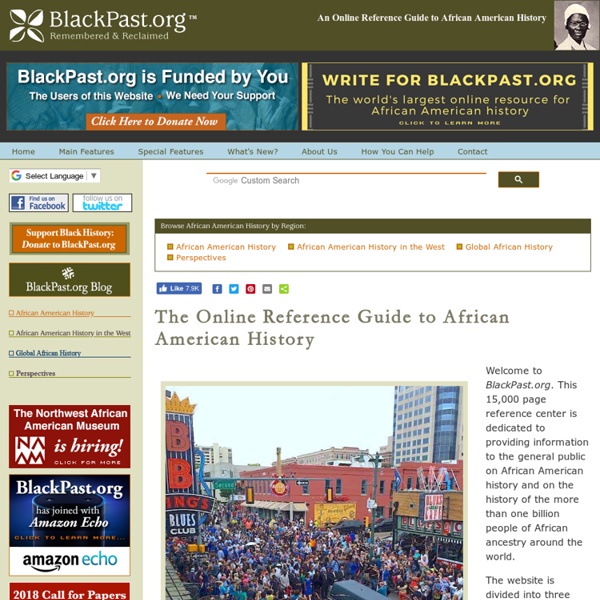 The Underside of Urban Life photo by Jacob Riis [courtesy of Yale University] Sewing and Starving in an Elizabeth Street Attic Lights, trolleys, skyscrapers, romance, action. These were among the first words to enter the minds of Americans when contemplating the new urban lifestyle. While American cities allowed many middle- and upper-class Americans to live a glamorous lifestyle, this was simply a fantasy to many poorer urban dwellers. Educational Resources Main content Get informed. Get involved. Get inspired. Find realistic simulations and memorable, interactive approaches to court basics that include comparing federal and state courts. Educational Activities

Brief Timeline of American Literature and Events, 1620-1920 Brief Timeline of American Literature and Events: Pre-1620 to 1920 This timeline provides a short chronology of events in American history and literature. It is linked to course pages and bibliographies as well as to a set of more general linked resources: pages on American authors, literary movements, and American literature sites. Each author page contains a picture (if available), a bibliography (if available), links to major sites about the author, and links to works online.

A Brief History of Jim Crow “I can ride in first-class cars on the railroads and in the streets,” wrote journalist T. McCants Stewart. “I can stop in and drink a glass of soda and be more politely waited upon than in some parts of New England.” Facts On File History Database Center Olive Branch Petition One of the most important documents of the American Revolution, the Second Continental Congress sent the Olive Branch Petition to King George III in July 1775. It was the most serious attempt by the American colonies to end hostilities and reconcile with Great Britain. In the summer of 1774, the conflict between Great Britain and its North American colonies intensified, and colonists began to choose sides. Antiwar and Radical History Project Aquatic "invasion" of Fort Lewis, July 13, 1969, copyright (c) Steve Ludwig Antiwar movements have never been separate from movements for civil rights, union recognition, and social change. In the Pacific Northwest, labor unions and socialists played a large part in the movement against World War I, while civil rights activism paved the way for the growth of the antiwar movement during the Vietnam era.

PBS Election The Contenders - 16 for '16 PBS, in partnership with OZY Media, is proud to present The Contenders-16 for '16, a documentary series that examines the most compelling and influential presidential campaigns in modern history. From Jesse Jackson’s groundbreaking 1984 and 1988 campaigns to Barry Goldwater’s 1964 launching of a brand of conservatism that influenced both Republican Ronald Reagan and even Democratic Hillary Clinton. The Contenders covers sixteen stories from the past 50 years of presidential election history. 4 Ideas That Could Begin to Reform the Criminal Justice System and Improve Police-Community Relations SOURCE: AP/Elise Amendola A demonstrator holds his hands up on campus at Boston University during a protest to show solidarity with protesters in Ferguson, Missouri. By Michele L. Jawando & Chelsea Parsons | Thursday, December 18, 2014 PRINT: SHARE: Endnotes and citations are available in the PDF and Scribd versions.Download the report: PDFRead it in your browser: Scribd From the shooting death of unarmed teenager Michael Brown, to the heavily militarized police response, to the protests in the wake of Brown’s death, to the failure of the grand jury to indict Officer Darren Wilson for his role in the shooting, the events in Ferguson, Missouri, have turned up the heat on a long simmering debate over the persistent inequalities in our criminal justice system.

SAT Subject Test: U.S. History: Road to Revolution, 1770–1775 Road to Revolution, 1770–1775 From 1770 to 1772, the British ignored the colonies and tension cooled substantially. However, in the fall of 1772, Lord North began preparations to pay royal governors out of customs revenue rather than let the colonial assemblies control payment. This would deny the assemblies the “power of the purse,” breaking assemblies’ ability to effectively check royal power by withholding, or threatening to withhold, payment. In response to this threat, Samuel Adams urged every Massachusetts community to appoint a committee to coordinate colony-wide measures protecting colonial rights. Within the year, approximately 250 Committees of Correspondence formed throughout the colonies.

Civil rights groups blast parents opting their kids out of high-stakes tests. Why they are wrong. Is high-stakes standardized testing helping students who live in poverty and students of color — or hurting them? A dozen civil rights groups have released a statement (see below) opposing efforts by parents and others to boycott high-stakes standardized tests aligned to the Common Core and similar standards, saying that the tests are valuable to students of color and those from low-income families. The statement says in part: