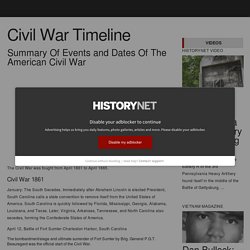 Civil War 1861 January: The South Secedes. Immediately after Abraham Lincoln is elected President, South Carolina calls a state convention to remove itself from the United States of America. 10 Facts: The Emancipation Proclamation. American Civil War - The Emancipation Proclamation. American Civil War. Second Battle of Bull Run. The Second Battle of Bull Run (Manassas) proved to be the deciding battle in the Civil War campaign waged between Union and Confederate armies in northern Virginia in 1862. 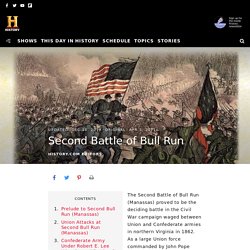 As a large Union force commanded by John Pope waited for George McClellan’s Army of the Potomac in anticipation of a combined offensive, Confederate General Robert E. Lee decided to strike first. Lee sent half of his Army of Northern Virginia to hit the Federal supply base at Manassas. Led by Stonewall Jackson, hero of the First Battle of Bull Run (Manassas) 13 months earlier, the rebels seized supplies and burned the depot, then established hidden positions in the woods. On August 29, Pope’s Federals clashed with Jackson’s men, who held their ground with heavy losses on both sides.

Prelude to Second Bull Run (Manassas) United States history. Child soldiers in the American Civil War. Given the large number of young men in the American Civil War, compared to the number of older men, one author stated that it “might have been called The Boys’ War.”[2] Reasons for joining[edit] When the surrender of Fort Sumter was announced, men and boys of all ages on both sides of the conflict were eager to enlist. 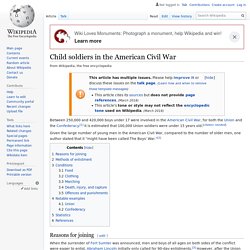 Abraham Lincoln initially only called for 90-day enlistments.[3] However, after the Union army was driven out of Richmond in the disastrous Peninsular campaign, and the Rebel Army began to march on to Washington, Lincoln issued a call for three hundred thousand three-year volunteers.[4] Young boys had many of the same motives for joining the military as their adult counterparts did. Lost Cause of the Confederacy. Exculpatory myth concerning Confederate war aims and defeat in the American Civil War The Lost Cause of the Confederacy, or simply the Lost Cause, is an American pseudo-historical,[1][2] negationist ideology which advocates the belief that the cause of the Confederate States during the American Civil War was a just and heroic one. 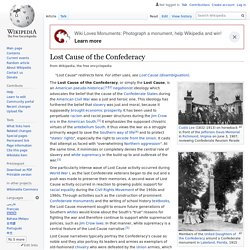 This ideology has furthered the belief that slavery was just and moral, because it supposedly brought economic prosperity. Out of War, a New Nation. Spring 2010, Vol. 42, No. 1 By James M. 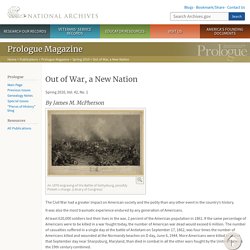 McPherson The Civil War had a greater impact on American society and the polity than any other event in the country’s history. It was also the most traumatic experience endured by any generation of Americans. 8 Ways the Civil War Affects Us Today. 4. 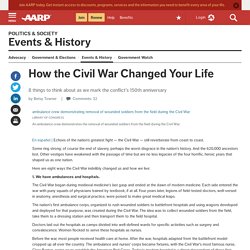 We let technology guide how we communicate. Abraham Lincoln was a techie. A product of the Industrial Revolution, Lincoln is the only president to have held a patent (for a device to buoy boats over shoals). He was fascinated with the idea of applying technology to war: In 1861, for example, after being impressed by a demonstration of ideas for balloon reconnaissance, he established the Balloon Corps, which would soon begin floating hot-air balloons above Confederate camps in acts of aerial espionage. Lincoln also encouraged the development of rapid-fire weapons to modernize combat. Civil War and Its Consequences. Brooklyn Daily Eagle, April 15, 1861 War is now upon us. 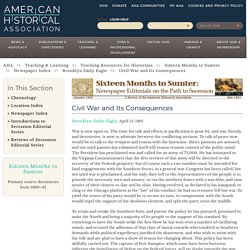 The time for talk and efforts at pacification is gone by, and war, bloody and destructive, is now to arbitrate between the conflicting sections. To talk of peace now would be to talk to the tempest and reason with the hurricane. Men's passions are aroused, and not until passion has exhausted itself will reason resume control of the public mind. Battle of Antietam. The Battle of Antietam, also called the Battle of Sharpsburg, occurred on September 17, 1862, at Antietam Creek near Sharpsburg, Maryland. 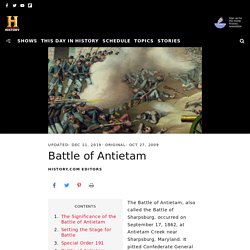 It pitted Confederate General Robert E. Lee’s Army of Northern Virginia against Union General George McClellan’s Army of the Potomac and was the culmination of Lee’s attempt to invade the north. The battle’s outcome would be vital to shaping America’s future, and it remains the deadliest one-day battle in all of American military history. The Significance of the Battle of Antietam There was a lot at stake for the Battle of Antietam.

But after several unexpected and demoralizing Union losses, including Major General John Pope’s sound defeat at the Second Battle of Bull Run, it became clear the Confederacy wasn’t going to be easy to crush. All Confederate soldiers gain presidential pardons, Dec. 25, 1868. In the aftermath of the Civil War, President Andrew Johnson on this day in 1868 issued pardons to all Confederate soldiers who fought in that conflict. 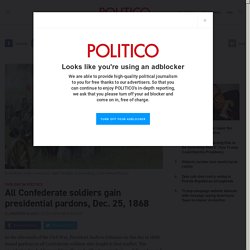 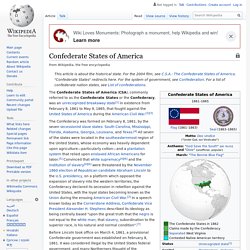 It was considered illegal by the United States federal government, and many Northerners thought of the Confederates as traitors. After war began in April, four slave states of the Upper South—Virginia, Arkansas, Tennessee, and North Carolina—also seceded and joined the Confederacy. United States politician and military officer. Benjamin F. Butler, in full Benjamin Franklin Butler, (born Nov. 5, 1818, Deerfield, N.H., U.S. —died Jan. 11, 1893, Washington, D.C.), American politician and army officer during the American Civil War (1861–65) who championed the rights of workers and black people. Britannica Quiz. Consequences - The Civil War. A Brief Overview of the American Civil War. Civil War - Causes, Dates & Battles. In the mid-19th century, while the United States was experiencing an era of tremendous growth, a fundamental economic difference existed between the country’s northern and southern regions.

In the North, manufacturing and industry was well established, and agriculture was mostly limited to small-scale farms, while the South’s economy was based on a system of large-scale farming that depended on the labor of black slaves to grow certain crops, especially cotton and tobacco. Growing abolitionist sentiment in the North after the 1830s and northern opposition to slavery’s extension into the new western territories led many southerners to fear that the existence of slavery in america—and thus the backbone of their economy—was in danger. In 1854, the U.S. Congress passed the Kansas-Nebraska Act, which essentially opened all new territories to slavery by asserting the rule of popular sovereignty over congressional edict.

10 Facts: What Everyone Should Know About the Civil War. History, Definition, Crisis, & Facts. Secession, in U.S. history, the withdrawal of 11 slave states (states in which slaveholding was legal) from the Union during 1860–61 following the election of Abraham Lincoln as president. Secession precipitated the American Civil War. Britannica Quiz. American Civil War - The Emancipation Proclamation. Summary, Map, & Significance. Missouri Compromise, (1820), in U.S. history, measure worked out between the North and the South and passed by the U.S. Congress that allowed for admission of Missouri as the 24th state (1821). It marked the beginning of the prolonged sectional conflict over the extension of slavery that led to the American Civil War. Britannica Quiz Journey Around the World Where did the first Montessori school begin? The territory of Missouri first applied for statehood in 1817, and by early 1819 Congress was considering enabling legislation that would authorize Missouri to frame a state constitution.

United States history. Black Hawk War, brief but bloody war from April to August 1832 between the United States and Native Americans led by Black Hawk (Ma-ka-tai-me-she-kia-kiak), a 65-year-old Sauk warrior who in early April led some 1,000 Sauk, Fox, and Kickapoo men, women, and children, including about 500 warriors, across the Mississippi River to reclaim land in Illinois that tribal spokesmen had surrendered to the U.S. in 1804. The band’s crossing back into Illinois spurred fear and anger among white settlers, and eventually a force of some 7,000 mobilized against them—including members of the U.S.

Army, state militias, and warriors from various other Indian peoples. Some 450–600 Indians and 70 soldiers and settlers were killed during the war. By 1837 all surrounding tribes had fled to the West, leaving most of the former Northwest Territory to white settlement. Britannica Quiz History Lesson: Fact or Fiction? World Heritage Sites are places of cultural significance. Kansas-Nebraska Act - Definition, Date & Significance. The Kansas-Nebraska Act was an 1854 bill that mandated “popular sovereignty”–allowing settlers of a territory to decide whether slavery would be allowed within a new state’s borders. Proposed by Stephen A. Black History Archives.