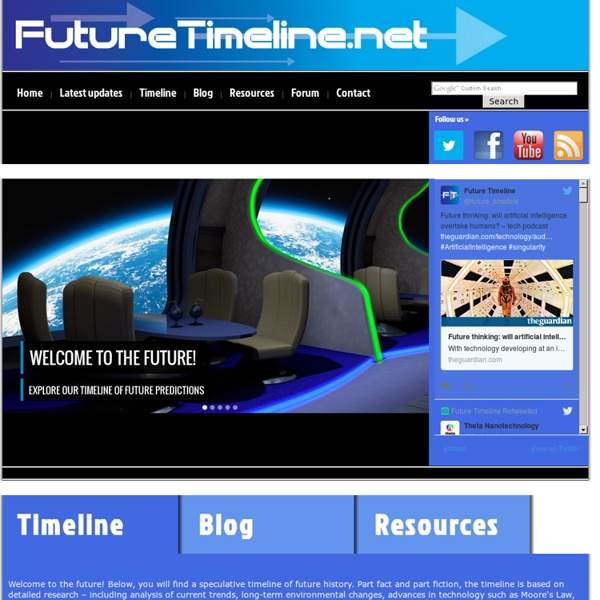 Welcome to the future! Below, you will find a speculative timeline of future history. Part fact and part fiction, the timeline is based on detailed research that includes analysis of current trends, long-term environmental changes, advances in technology such as Moore's Law, future medical breakthroughs, the evolving geopolitical landscape and more. Where possible, references have been provided to support the predictions. We also have a blog covering the latest news and breakthroughs. FutureTimeline is an ongoing, collaborative project that is open for discussion – we welcome ideas from scientists, futurists, inventors, writers and anyone else interested in future trends.

Humans will be extinct in 100 years says eminent scientist (PhysOrg.com) -- Eminent Australian scientist Professor Frank Fenner, who helped to wipe out smallpox, predicts humans will probably be extinct within 100 years, because of overpopulation, environmental destruction and climate change. Fenner, who is emeritus professor of microbiology at the Australian National University (ANU) in Canberra, said homo sapiens will not be able to survive the population explosion and “unbridled consumption,” and will become extinct, perhaps within a century, along with many other species. United Nations official figures from last year estimate the human population is 6.8 billion, and is predicted to pass seven billion next year. Fenner told The Australian he tries not to express his pessimism because people are trying to do something, but keep putting it off.

Surface Design + Inspiration Interiors | Pillow Talk It seems like these days the throw pillow craze has reached new heights. No longer are we looking for our couch decorations just to blend in and stay still, we have begun to ask our couch art to positively pulse with creativity. And that’s where artists like Tyler Spangler step in. What Humans Are Really Doing to Our Planet, in 19 Jaw-Dropping Images Last week, Pope Francis and church officials encouraged everyone to consume less and think more about our impact on the environment. It's a timely warning because the next six months will be critical to our future. Ahead of a series of major events later this year, The Foundation for Deep Ecology and the Population Media Center released a collection that illustrates the devastating effects of out-of-control growth and waste, and it's breathtaking. "This is an issue that people care about, and oftentimes it's just not discussed by mainstream media," Missie Thurston, director of marketing and communications at the Population Media Center, told Mic. It's difficult to always know the impacts of our daily choices, like the real effect of buying a bottled water or an extra TV or laptop.

Futurology: The tricky art of knowing what will happen next 23 December 2010Last updated at 02:38 By Finlo Rohrer BBC News Magazine Cheap air travel was among the predictions (illustration from Geoffrey Hoyle's book) A 1972 book which predicts what life would be like in 2010 has been reprinted after attracting a cult following, but how hard is it to tell the future? Geoffrey Hoyle is often asked why he predicted everybody would be wearing jumpsuits by 2010. Exocortex An exocortex is a theoretical artificial external information processing system that would augment a brain's biological high-level cognitive processes. An individual's exocortex would be composed of external memory modules, processors, IO devices and software systems that would interact with, and augment, a person's biological brain. Typically this interaction is described as being conducted through a direct brain-computer interface, making these extensions functionally part of the individual's mind. Individuals with significant exocortices could be classified as cyborgs or transhumans. Living Digital provided one description of the concept:

THE FUTURIST Magazine Releases Its Top 10 Forecasts for 2013 and Beyond Each year since 1985, the editors of THE FUTURIST have selected the most thought-provoking ideas and forecasts appearing in the magazine to go into our annual Outlook report. Over the years, Outlook has spotlighted the emergence of such epochal developments as the Internet, virtual reality, the 2008 financial crisis and the end of the Cold War. But these forecasts are meant as conversation starters, not absolute predictions about the future.

CxC - Childfree by Choice — Faith Popcorn's BrainReserve Redefining Tomorrow’s Family The nuclear family is detonating “As American as Mom and apple pie,” the saying used to go. But now, a societal tsunami is underway, changing the way we see motherhood and questioning its primacy in the fabric of our culture.

Can we change the future? A scientific view... I was reading this article from 1998 about quantum theory – I know it’s pretty old…, but there was something about it that struck me! It’s maybe also because I’m reading this book that contains a lot of prescience characteristics or just my open mind. So, I decided to put together all this scientific evidence with one scope – Can we change the future? Do we have an influence on our future?