For Back to School, Reimagine Classroom Design 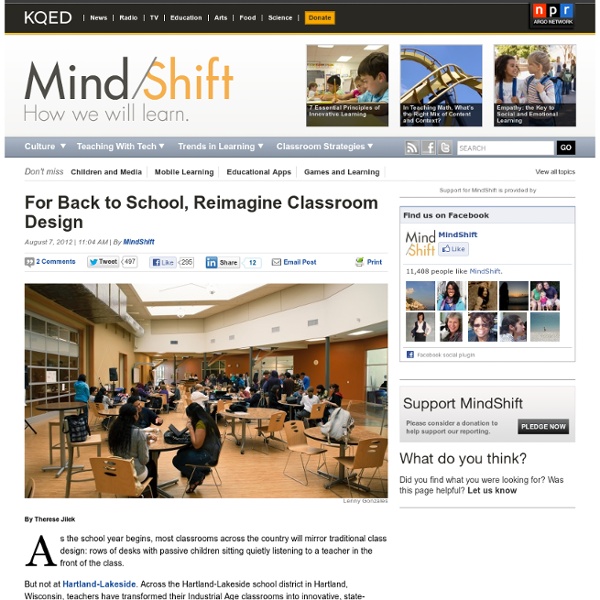 Teaching Strategies Lenny Gonzales By Therese Jilek As the school year begins, most classrooms across the country will mirror traditional class design: rows of desks with passive children sitting quietly listening to a teacher in the front of the class. But not at Hartland-Lakeside. Across the Hartland-Lakeside school district in Hartland, Wisconsin, teachers have transformed their Industrial Age classrooms into innovative, state-of-the-art learning spaces. The innovative spaces were a product of teachers changing how they taught and viewed student learning. Teachers realized that they needed to do more than rearrange the room; they needed to start over. As teachers transformed their roles into facilitators of learning, they found that standing in front of the classroom or lecturing was no longer prudent. Students and teachers work together throughout the day in many different ways. This change also reflects the increased use of mobile technology to personalize learning. Therese Jilek

Joel Klein, Sal Khan And Sebastian Thrun On Inventing The Future Of Education, At Disrupt SF Three trailblazing figures in educational technology are showcasing the future of learning at our upcoming annual conference, Disrupt San Francisco. Former New York education Chancellor, Joel Klein, will get into more of the details about the recently announced Amplify project, News Corp’s ambitious venture to create tailored, digital learning for the American education system. Bill Gates’ “favorite teacher”, Sal Khan, who founded the Youtube-based Khan Academy, will speak about his pioneering work in the “flipped classroom” and launch a new feature to his site.

Sweden’s Newest School System Has No Classrooms There’s a whole new classroom model and it’s a sight to behold. The newest school system in Sweden look more like the hallways of Google or Pixar and less like a brick-and-mortar school you’d typically see. There are collaboration zones, houses-within-houses, and a slew of other features that are designed to foster “curiosity and creativity.” That’s according to Vittra, which runs 30 schools in Sweden. Their most recent school, Telefonplan School (see photos below via Zilla Magazine) in Stockholm, could very well be the school of the future. Building and Environment - A holistic, multi-level analysis identifying the impact of classroom design on pupils’ learning Abstract The aim of this study was to explore if there is any evidence for demonstrable impacts of school building design on the learning rates of pupils in primary schools. Hypotheses as to positive impacts on learning were developed for 10 design parameters within a neuroscience framework of three design principles. These were tested using data collected on 751 pupils from 34 varied classrooms in seven different schools in the UK. The multi-level model developed explained 51% of the variability in the learning improvements of the pupils, over the course of a year. However, within this a high level of explanation (73%) was identified at the “class” level, linked entirely to six built environment design parameters, namely: colour, choice, connection, complexity, flexibility and light.

Curation: How the Global Brain Evolves By Eliot Van Buskirk, Evolver.fm “Those who can, do. Those who can’t, review. Those who can’t review, tweet. Those who can’t tweet retweet.” That quote is zinging around the internet this week. How to Apply Design Thinking in Class, Step By Step By Anne Stevens For educators ready to try the idea of design thinking, you’ll be glad to know it does not require extensive transformation of your classroom. That said, it can be a transformative experience for all involved. Here, we try to answer your questions about integrating different components of a design learning experience into familiar, pre-existing scenarios that play out in every school. Can my classroom become a space of possibility? Richard D. Kahlenberg Reviews "Whither Opportunity?" WHEN MITT ROMNEY recently announced his education platform—more school choice, greater emphasis on charter schools, a tough line on teacher performance, and skepticism about teachers unions—it was widely noted that this array of policies was not much different from those advanced by the incumbent president. With the exception of school vouchers (which Romney favors and Obama opposes), both men have a basically center-right view of education policy, which prescribes tough business principles to elementary and secondary learning in order to reduce the achievement gap between black and Latino students, and white and Asian students. But what if this bipartisan policy consensus is wrong? What if the achievement gap, today, is much more about rich and poor than black and white? Greg Duncan of U.C.

New Media Consortium Names 10 Top 'Metatrends' Shaping Educational Technology - Wired Campus A group of education leaders gathered last week to discuss the most important technology innovations of the last decade, and their findings suggest the classroom of the future will be open, mobile, and flexible enough to reach individual students—while free online tools will challenge the authority of traditional institutions. The retreat celebrated the 10th anniversary of the New Media Consortium’s Horizon Project, whose annual report provides a road map of the education-technology landscape. One hundred experts from higher education, K-12, and museum education identified 28 “metatrends” that will influence education in the future. The 10 most important, according to a New Media Consortium announcement about the retreat, include global adoption of mobile devices, the rise of cloud computing, and transparency movements that call into question traditional notions of content ownership concerning digital materials. Of the top 10 trends the group flagged, Mr.

The 50+ Best Ways to Curate and Share Your Favorite Social Media and News Content There’s so much information online just begging to be curated: news, social media, images, video, websites… the list goes on. Reading great content from my favorite blogs and websites is one of my favorite down-time activities. It’s also an important part of my job as an IT Director because I need to stay on top of the latest trends, announcements and tech news. Just a few years ago, the tools I used to use for reading and consuming content were Google Reader, StumbleUpon, Digg, Delicious… you know all the big names. More recently I’ve discovered some great new tools to read and share my favorite content which I’ve included here in this list. Whether you are a person who just likes to stay on top of the latest news, a blogger like me who needs a way to organize the vast amount of information that comes my way or a person who just enjoys sharing what they find with others you’ll love this list.

Piping Up : Thérèse Blogs Posted by Therese on Thursday, August 2, 2012 It’s never too late for a career change, which is why I am going to stop writing and get myself a job at Challenge Plumbing. “Whatever for?” I hear you ask, “For plumbing is not at all glamorous.” I understand your concern, but I am not aiming for the mechanical or messy side of things. 12 Reasons We Need To Reinvent The School Desk Added by Jeff Dunn on 2012-09-27 Students young and old frequently complain about the quality of the desks and chairs provided on campus, yet it remains one of the more overlooked issues. A pity, because poor ergonomics and comfort can actually lead to poor health, and poor health leads to missed classes and heightened medical expenditures once career time rolls around.