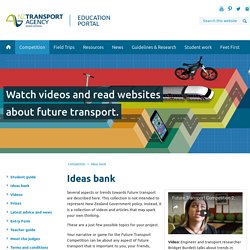 This collection is not intended to represent New Zealand Government policy. Instead, it is a collection of videos and articles that may spark your own thinking. These are a just few possible topics for your project. Your narrative or game for the Future Transport Competition can be about any aspect of future transport that is important to you, your friends, family, whānau or community. Walking and cycling Investment in New Zealand’s cycleway network is up, and people are interested in the walkability of places where we live. Watch videos and read websites. Electric vehicles More and more vehicles might be powered by electric motors instead of petrol or diesel engines.

Driverless vehicles Computer technology is inside prototype vehicles with automated controls. Future public transport Connected vehicles and mobility as a service Resilience The earthquake of November 14, 2016 affected the lives of many people. Road Safety.

Driverless cars, shuttles, buses, taxis. Air Travel. 6 Apps for Virtual Reality Field Trips Including Google Expeditions. Guardian series on the future of transportation. Transport: A Reading List – How We Get To Next. Technology and transportation have always been intertwined. 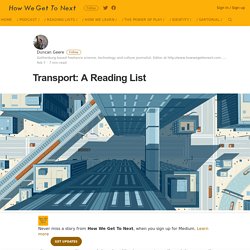 Our earliest ancestors discovered that shoe-like foot coverings allowed them to walk farther along paths like the Laetoli and the Natchez Trace, carrying goods to trade with increasingly distant cultures and necessitating the creation of currency. The wheel was invented in the late Neolithic Era for pottery, but it was soon adopted for travel. While the Romans built 53,000 miles of roads across their empire, allowing for fast movement of troops and goods, the most sophisticated ancient roads were found in Baghdad around the fifth century A.D., paved with tar from the early distillation of oil. In the Pacific, dugout canoes performed the same role that roads did in Eurasia, allowing various Stone-Age populations to gather and trade resources. 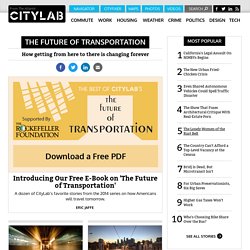 What Old Transit Maps Can Teach Us About a City's Future An analysis of once-rejected, later-constructed routes in Los Angeles, Atlanta, and Houston. A Complete Guide to the Future of U.S. Freight Movement The future holds more and more stuff to be transported—and infrastructure will have to change drastically to accommodate our appetites. Los Angeles Is Building an e-Highway The road would eliminate truck emissions, and is being tested in a corridor that connects the port to downtown. Its Streetcar Stalled, Kansas City Mulls the Best Way Forward Many cities face a similar challenge finding the money to expand a starter line. Seattle Wants to Change the Whole Conversation on Streetcars Unlike most new lines in U.S. cities, the Center City Connector would operate in its own exclusive lane. How San Francisco Is Designing Its Metro Train of the Future. Transport Futures. Future - Solving transport headaches in the cities of 2050.

What is the future of urban mobility? 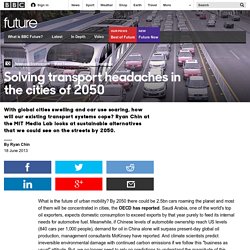 By 2050 there could be 2.5bn cars roaming the planet and most of them will be concentrated in cities, the OECD has reported. Saudi Arabia, one of the world's top oil exporters, expects domestic consumption to exceed exports by that year purely to feed its internal needs for automotive fuel. Meanwhile, if Chinese levels of automobile ownership reach US levels (840 cars per 1,000 people), demand for oil in China alone will surpass present-day global oil production, management consultants McKinsey have reported. And climate scientists predict irreversible environmental damage with continued carbon emissions if we follow this "business as usual" attitude.

But, we no longer need to rely on predictions to understand the magnitude of this future, we can simply need to visit Beijing to realise that, as science fiction author William Gibson said, "the future is already here – it's just not very evenly distributed". Driver free. Future Public Transport (Concept) 14 crazy design proposals for future transport. A proposal to transform London Underground's Circle Line into a 17-mile-long moving walkway quickly became one of this week's most-discussed stories. 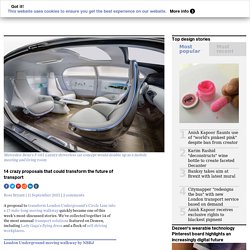 We've collected together 14 of the most unusual transport solutions featured on Dezeen, including Lady Gaga's flying dress and a flock of self-driving workplaces. London Underground moving walkway by NBBJ Trains on London's Underground network can be claustrophobic, crowded and frustrating – especially during peak travelling hours. NBBJ's concept to transform the subterranean Circle Line into a giant travelator proposes replacing them with walkways moving at speeds of up to 15 miles per hour. Find out more about this project » Hyperloop by Elon Musk Elon Musk's proposed Hyperloop system would use magnets and fans to propel passenger capsules through a long pipe-like structure at speeds faster than commercial aeroplanes. Underground travel - tube travel.