What 100 Experts Think About The Future Of Learning 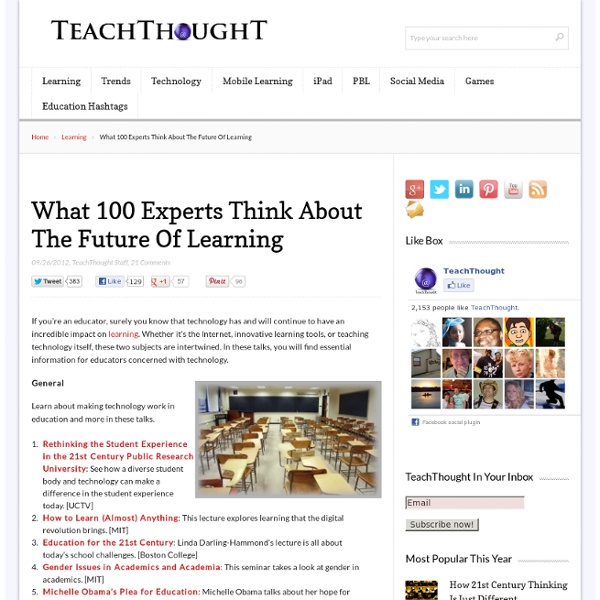 If you’re an educator, surely you know that technology has and will continue to have an incredible impact on learning. Whether it’s the Internet, innovative learning tools, or teaching technology itself, these two subjects are intertwined. In these talks, you will find essential information for educators concerned with technology. General Learn about making technology work in education and more in these talks. Rethinking the Student Experience in the 21st Century Public Research University: See how a diverse student body and technology can make a difference in the student experience today. Sharing Education These talks explore the idea of open, shared education. Hector Ruiz on Connecting the World: Hector Ruiz lectures on Internet access for everyone. Creativity & Innovation Watch these talks to see how you can foster innovation and the creative spirit. Ken Robinson Says Schools Kill Creativity: Ken Robinson’s lecture makes a case for a more creative education system. Internet & New Media

The Difference Between Linear and Exponential Thinking As humans we evolved on this planet over the last hundreds of thousands of years in an environment that I would call local and linear. It was a local and linear environment because the only things that affected you as you were growing up on the plains of Africa was what was in a day’s walk. It was local to you. 9 Characteristics Of 21st Century Learning The label of “21st Century learning” is vague, and is an idea that we here at TeachThought like to take a swing at as often as possible, including: –weighing the magic of technology with its incredible cost and complexity –underscoring the potential for well thought-out instructional design –considering the considerable potential of social media platforms against its apparent divergence from academic learning

34 Remarkable and Surprising Things About The Future — Life Learning 34 Remarkable and Surprising Things About The Future I’ve been reading and thinking about the future a lot recently, and decided to spend a week “nerding out” at Singularity University, to satisfy my curiosity. It was a great event, featuring experts from across the entire spectrum of technology and innovation. In this post I’ll share the ideas I’ve been developing for some time — based on my own research as well as time at spent at SU — on how we should think about the future and the myriad opportunities it presents. I am extremely optimistic about our future being a world where powerful technologies solve some of our biggest challenges across a range of industries from medicine to transportation to energy and many others. This will result in a significantly better standard of living for all as well as many remarkable inventions, in the same way that we live significantly better and different lives than our great great grandparents did.

Good Enough Mothering Recently I was introduced to the work of Ken Robinson and to his thoughts about education. He points to the failure of current systems of education to meet the challenges we now face and the need to create alternatives. He believes that systems of mass education tend to suppress the natural capacity for creativity with which we are all born. In his view, it is urgent that we cultivate these capacities and he feels we must rethink the current dominant approaches to education to make sure that we do. As I read his recent TED talk I thought about how his ideas apply to us as parents as we raise our children. What seems especially relevant is the emphasis on the extraordinary capacities that children have for creativity and innovation.

Is technology making us more or less intelligent? Editor’s note: This article is part of our collaboration with Point Taken, a new program from WGBH that will next air on Tuesday, June 21 on PBS and online at pbs.org. The show features fact-based debate on major issues of the day, without the shouting. The smartphone in your hand enables you to record a video, edit it and send it around the world. With your phone, you can navigate in cities, buy a car, track your vital signs and accomplish thousands of other tasks. And so? Each of those activities used to demand learning specific skills and acquiring the necessary resources to do them.

18 Mind-Blowing eLearning Statistics You Need To Know It's no secret that the training landscape has changed dramatically over the past ten years as eLearning and mobile technologies have gone from early-adopter novelties to mainstream essentials. Still, there are plenty of traditional companies out there who aren't buying all of the eLearning hype or can't convince their boss or HR team to experiment in the brave new world of eLearning. So we've rounded up more than a dozen powerful stats that are sure to be eye-openers, if not total mind-changers.

In the future your sales assistant could be a robot This fall, customers cruising the aisles of Lowe’s home improvement stores in the San Francisco Bay Area may see a new type of employee taking inventory and assisting shoppers. You won’t find a nametag on this worker, but you won’t confuse it with other employees, either. The new kid in town is the LoweBot, an autonomous retail service robot that scans and audits store inventory on the floor. It uses voice recognition to identify products for customers and lead them to the right shelf — in multiple languages. The retailer is deploying LoweBots at 11 of its Bay Area stores over a seven-month period using NAVii robots made by Fellow Robots, following a successful two-year pilot program of a first-generation robot called OSHbot that was tested at one of Lowe’s Orchard Supply Hardware stores.