Open science and future of science

Write research documents online, together. Project: Research workflow. Conference-journal hybrids. Open science is a research accelerator : Nature Chemistry. In 2006 a website (on The Synaptic Leap forum) was started in which the problem of the production of PZQ as a single enantiomer was laid out7. 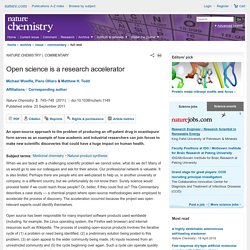 There was some initial traffic, but there was little substantial community input. It is a fallacy that open-source products simply emerge — there are usually kernels of activity arising from funded work, to which the community then responds8. In mid-2008 the PZQ project was funded by a partnership between the World Health Organization and the Australian Government that enabled preliminary experiments to be performed and all data deposited in an open-source online electronic lab notebook (ELN) which could be properly curated9.

How PeerJ Is Changing Everything In Academic Publishing. Has there ever been a business more ripe for disruption than academic publishing? 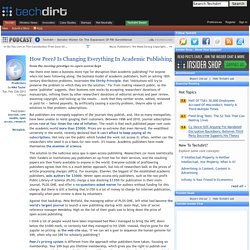 For anyone who's not been following along, the business model of academic publishers, built on solving 18th century distribution problems, incarnates the Shirky Principle: that "Institutions will try to preserve the problem to which they are the solution. " Far from making research public, as the name "publisher" suggests, their business now works by accepting researchers' donations of manuscripts, refining them by other researchers' donations of editorial services and peer review, assuming copyright, and locking up the results -- work that they neither wrote, edited, reviewed or paid for -- behind paywalls. By artificially causing a scarcity problem, they're able to sell solutions to that problem: subscriptions.

But publishers are monopoly suppliers of the journals they publish, and, like so many monopolists, have been unable to resist gouging their customers. L’édition scientifique : son modèle, ses scandales - Omniscience. Seeing through the eLife Lens: A new way to view research. We’re excited to announce the release of an innovative, still experimental, new tool that will make reading articles online easier for researchers, authors and editors alike: eLife Lens. 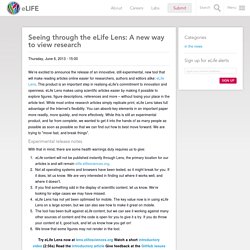 This product is an important step in realising eLife's commitment to innovation and openness. eLife Lens makes using scientific articles easier by making it possible to explore figures, figure descriptions, references and more – without losing your place in the article text. While most online research articles simply replicate print, eLife Lens takes full advantage of the Internet’s flexibility. You can absorb key elements in an important paper more readily, more quickly, and more effectively. While this is still an experimental product, and far from complete, we wanted to get it into the hands of as many people as possible as soon as possible so that we can find out how to best move forward. 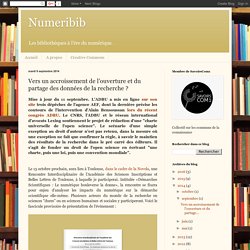 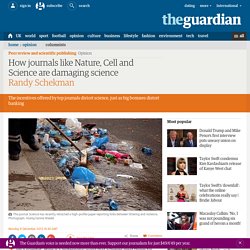 Mine is a professional world that achieves great things for humanity. But it is disfigured by inappropriate incentives. The prevailing structures of personal reputation and career advancement mean the biggest rewards often follow the flashiest work, not the best. Publons set to revolutionize peer review in physics. Publons is another great alternative or complement to the traditional peer review process. 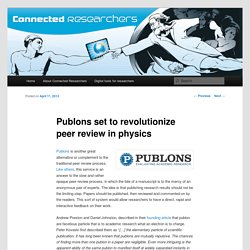 Like others, this service is an answer to the slow and rather opaque peer-review process, in which the fate of a manuscript is to the mercy of an anonymous pair of experts. The idea is that publishing research results should not be the limiting step. Papers should be published, then reviewed and commented-on by the readers. Adventures in Academia: Totally Open Science: A Proposal for a New Type of Preregistration. Methodological rigor has been the center of a growing debate in the behavioral and brain sciences. 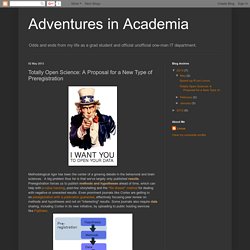 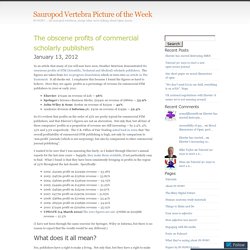 The figures are taken from her in-progress dissertation which in turn cites an article in The Economist. It all checks out. I emphasise this because I found the figures so hard to believe. Journal editors take note – you have the power – Australasian Open Access Strategy Group. The editorial board from the Journal of Library Administration has resigned in protest of the restrictive licensing policy imposed by its publisher Taylor & Francis (T&F). 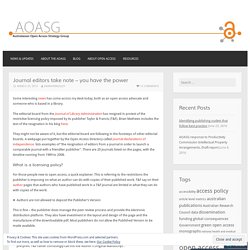 Brian Mathews includes the text of the resignation in his blog here. They might not be aware of it, but the editorial board are following in the footsteps of other editorial boards. Open Science: An Introduction. Image by Alex Galt/USFWS / CC BY This course is a collaborative learning environment meant to introduce the idea of Open Science to young scientists, academics, and makers of all kinds. 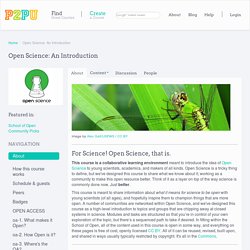 Open Science is a tricky thing to define, but we've designed this course to share what we know about it; working as a community to make this open resource better. Think of it as a layer on top of the way science is commonly done now. Just better.